Delicious cheddar cheesy BBQ pulled pork nachos are an easy crowd pleaser and perfect for game day. Load them up with fresh favorites like with pickled red onions, green onions and cilantro. Or, make it more of a meal with black beans, corn and tomatoes! 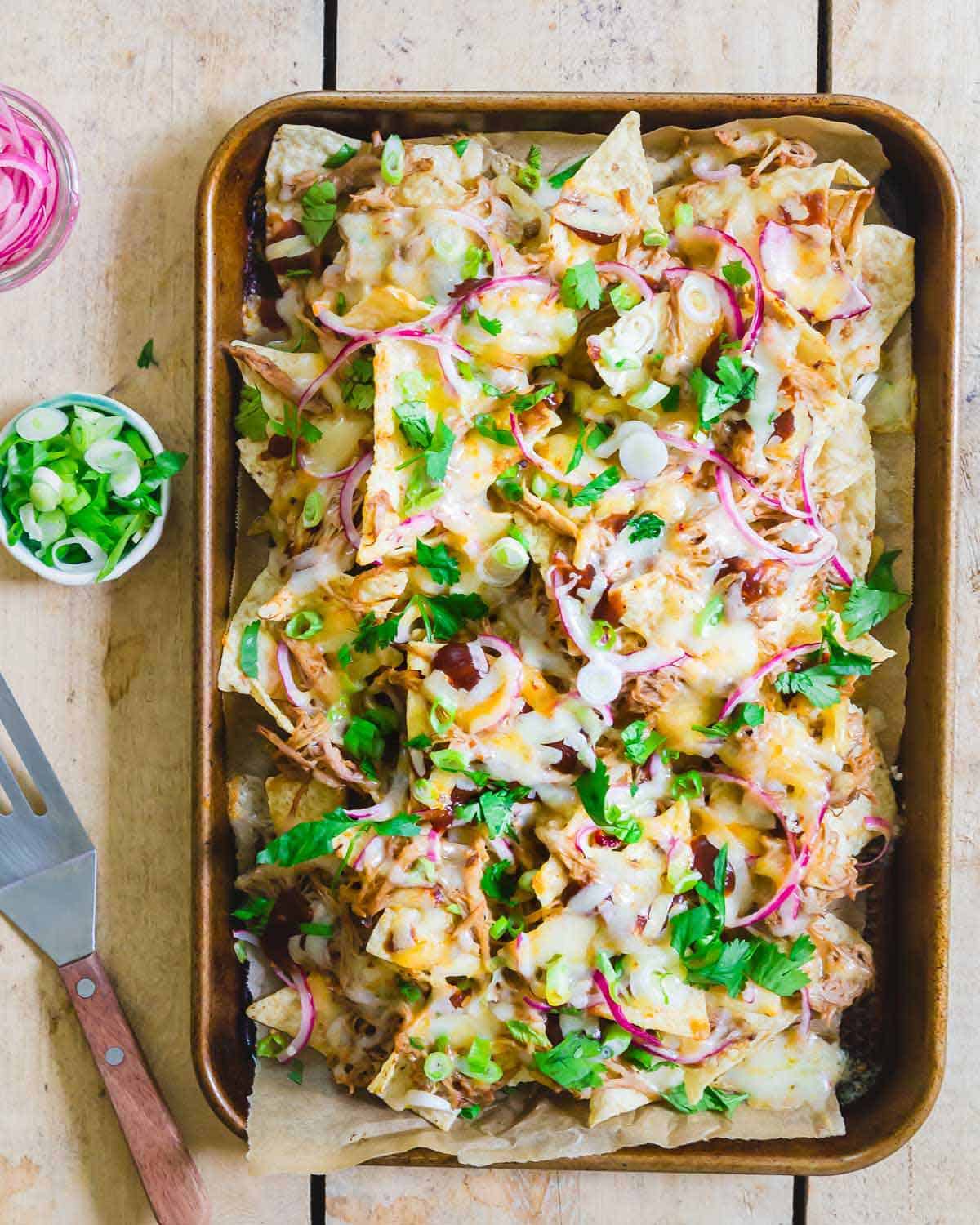 If somehow I get forced to watch football this weekend (not my thing AT ALL), there better be some good party food on hand.

Because as far as I’m concerned that’s the only good thing to come out of the Superbowl festivities.

I’ll happily feast on some chicken wings (or better yet turkey legs), Buffalo Chicken Broccoli Cheddar Bites, BBQ Black Bean Tortilla Pizza or even some healthier Roasted BBQ Chickpeas while pretending like I care what’s going down on the TV.

Truthfully, I don’t even know what teams are IN the Superbowl this year.

So whether you’re like me and just there for the food or actually into the game but also into the food (because no one isn’t into the party food during the Superbowl), I’ve got the best BBQ pulled pork nacho recipe for you to dive into this weekend. 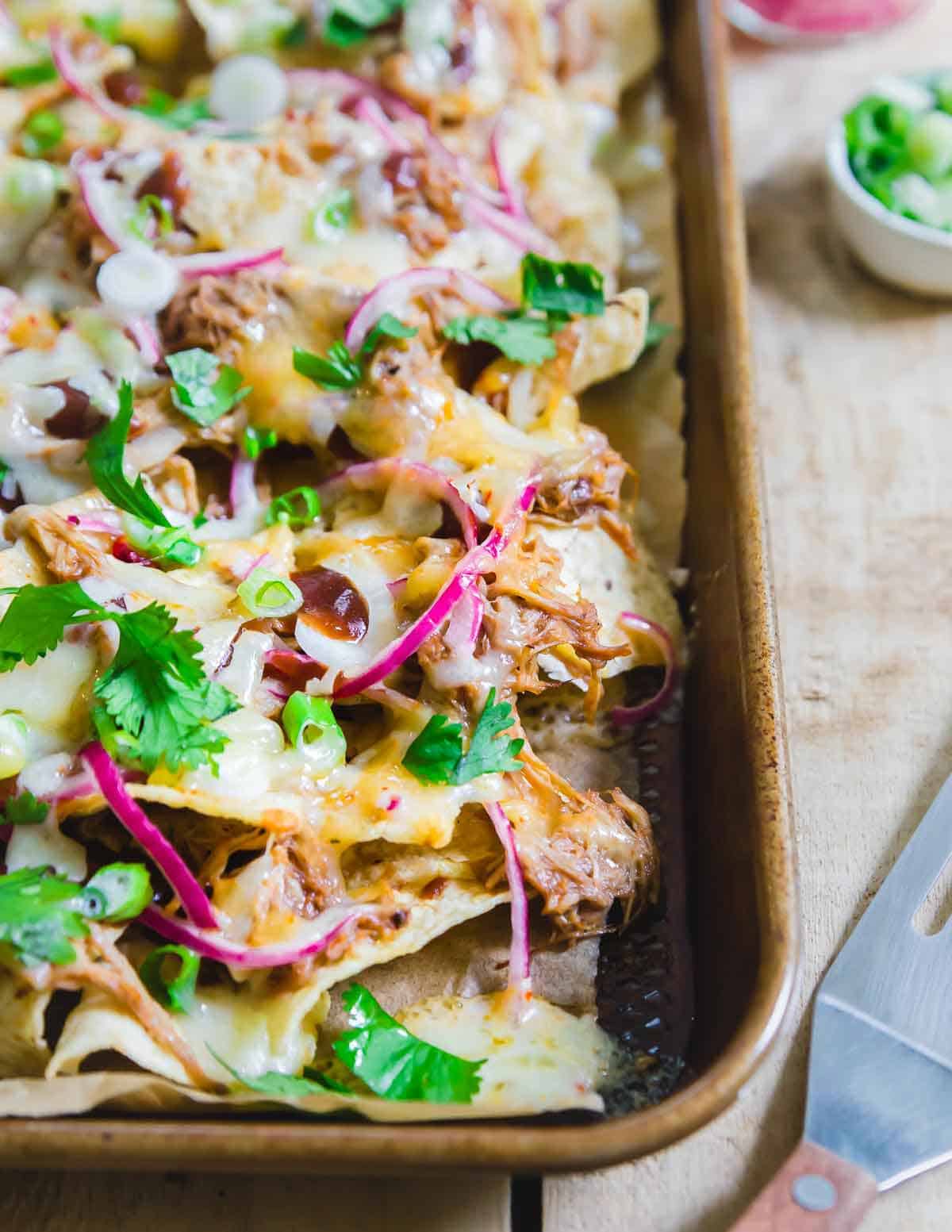 Pulled pork nachos are nothing groundbreaking but a couple tweaks like BBQ sauce and some pickled red onions make these nachos unbeatable and addicting. I also love the fresh pop of cilantro, a must have for me on nachos.

I wouldn’t call them loaded pulled pork nachos by any means, the toppings are pretty basic and kept to the minimum for simple nacho deliciousness but the flavor is right on point.

HOW TO MAKE BBQ PULLED PORK IN THE SLOW COOKER

This recipe calls for using leftover BBQ pulled pork in the nachos. I think it’s fair to say we all know how to make BBQ pulled pork or at least even buy it pre-made in the store these days.

If not though, you can follow this simple slow cooker recipe for BBQ pulled pork.

It will give you quite a bit of bbq pulled pork to use in things like sandwiches (you could make these Slow Cooker BBQ Apple Pulled Pork Sandwiches or these Pickled Pineapple BBQ Pork Sandwiches), other meals and of course these nachos! 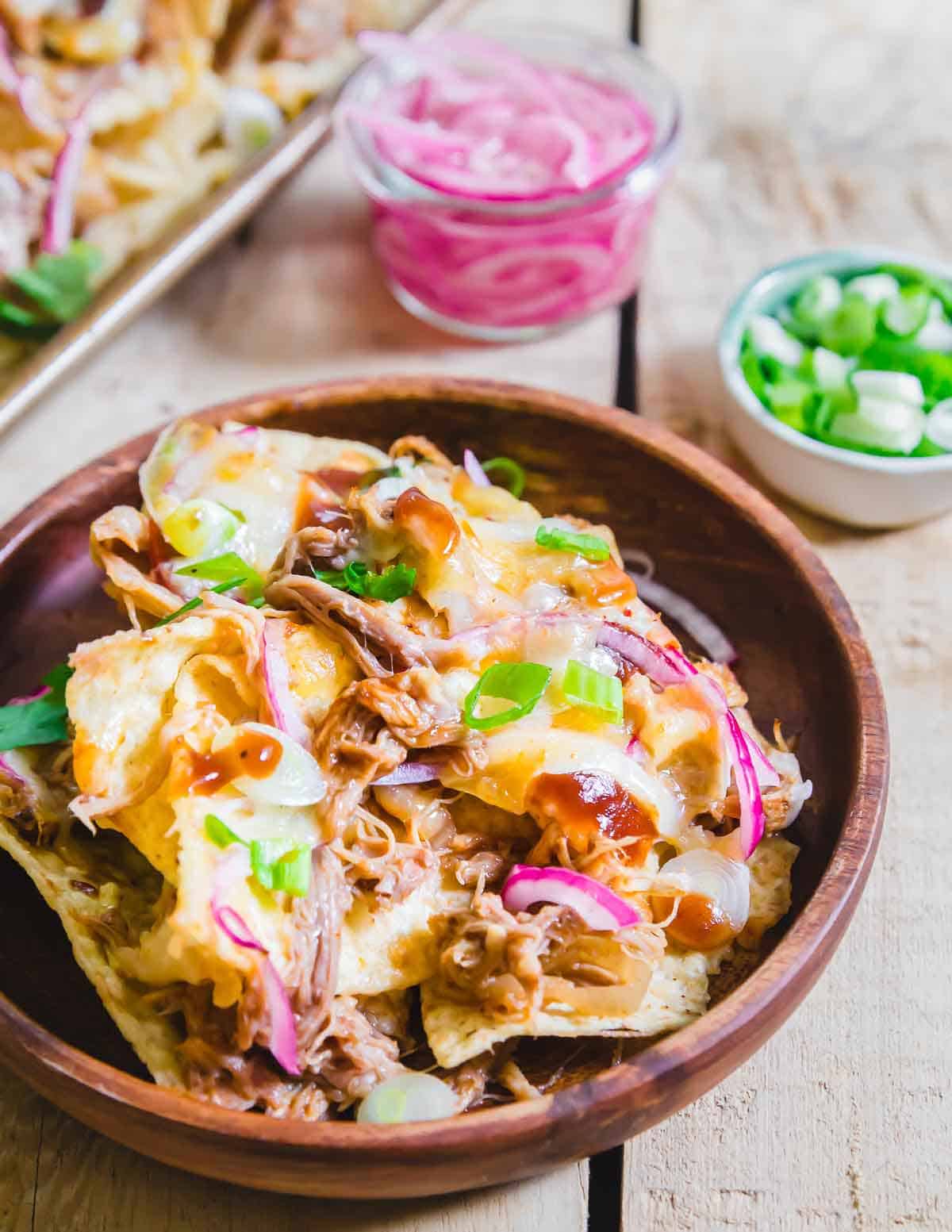 Once you have the BBQ pulled pork ready assembling the nachos is a breeze!

You’ll need a large baking sheet lined with parchment paper and the following:

Scatter half the tortilla chips on the baking sheet and then half the pork, cheddar cheese, pickled red onions and BBQ sauce. Repeat with another layer on top then bake at 400°F for about 8-10 minutes until the cheese is melted.

Looking for a lighter, spring inspired take on nachos? Try these Lamb Nachos.

This is one of my favorite ingredients in the pulled pork nachos so don’t feel tempted to skip it and just use regular red onions. Their pickled flavor goes so well with the sweetness from the BBQ sauce.

Making your own pickled red onions is quick and easy with just a couple ingredients I’m sure you have on hand:

Place the red onions in a jar or a bowl. Mix the remaining ingredients together until the sugar and salt dissolve. Pour over the onions and let sit for an hour.

Just make sure the onions are submerged in the mixture and they’ll get nice and tangy in no time.

I’ve used the pickled onions as soon as 30 minutes into pickling and they still have plenty of tangy flavor so if you’re pressed for time, the hour wait isn’t a hard and fast rule.

These will keep in the refrigerator for a couple weeks to use on salads or other meals too so it’s worth it to make a batch if you’re going to make them for the pulled pork nachos. 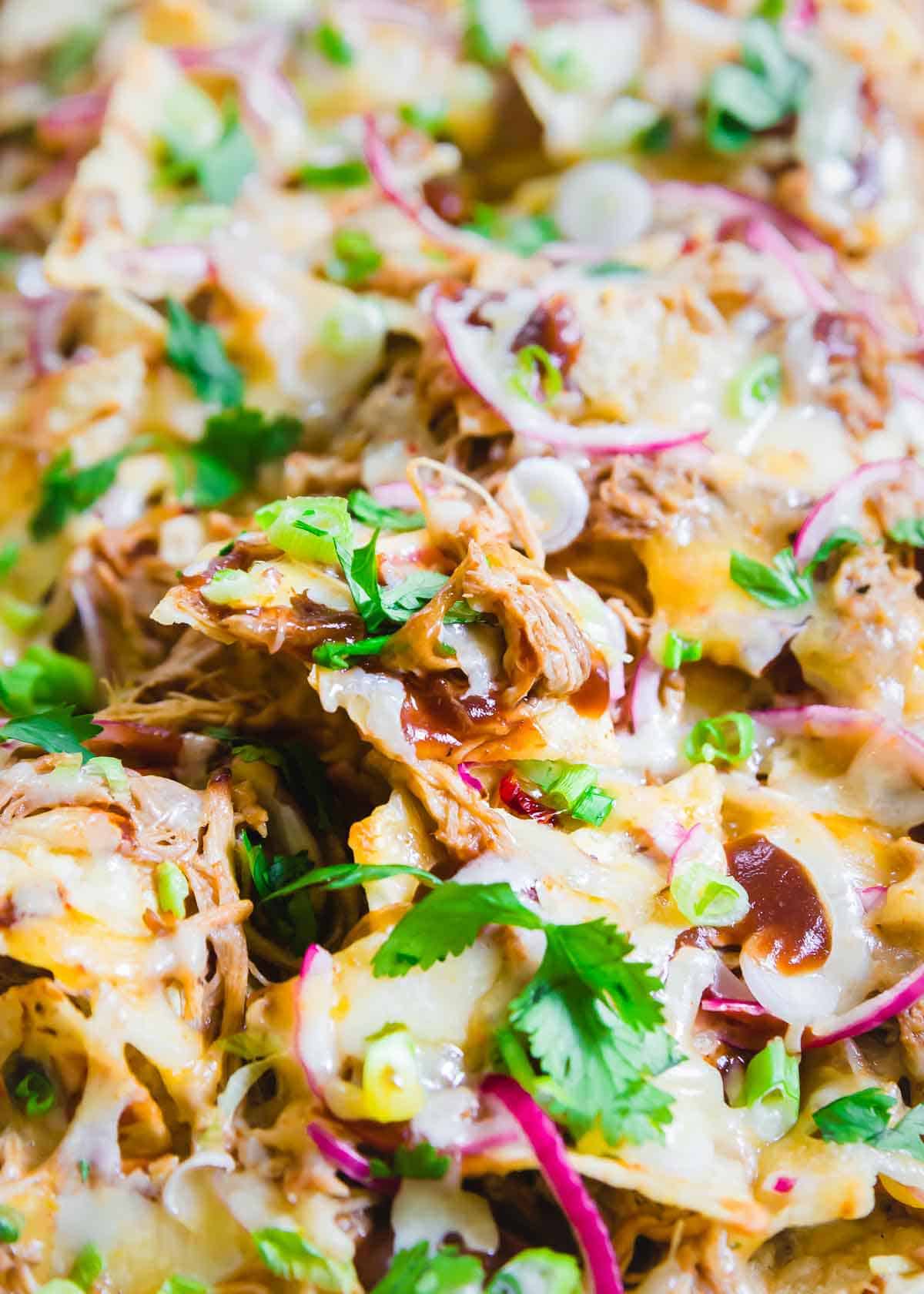 I really like the simplicity of these bbq pulled pork nachos but if you want to load them up and make it more of a meal, that’s a great idea too!

Here are some other toppings I would use:

The first three should be added prior to baking while the last two would be added after they’re pulled from the oven along with the green onions and cilantro as a garnish. 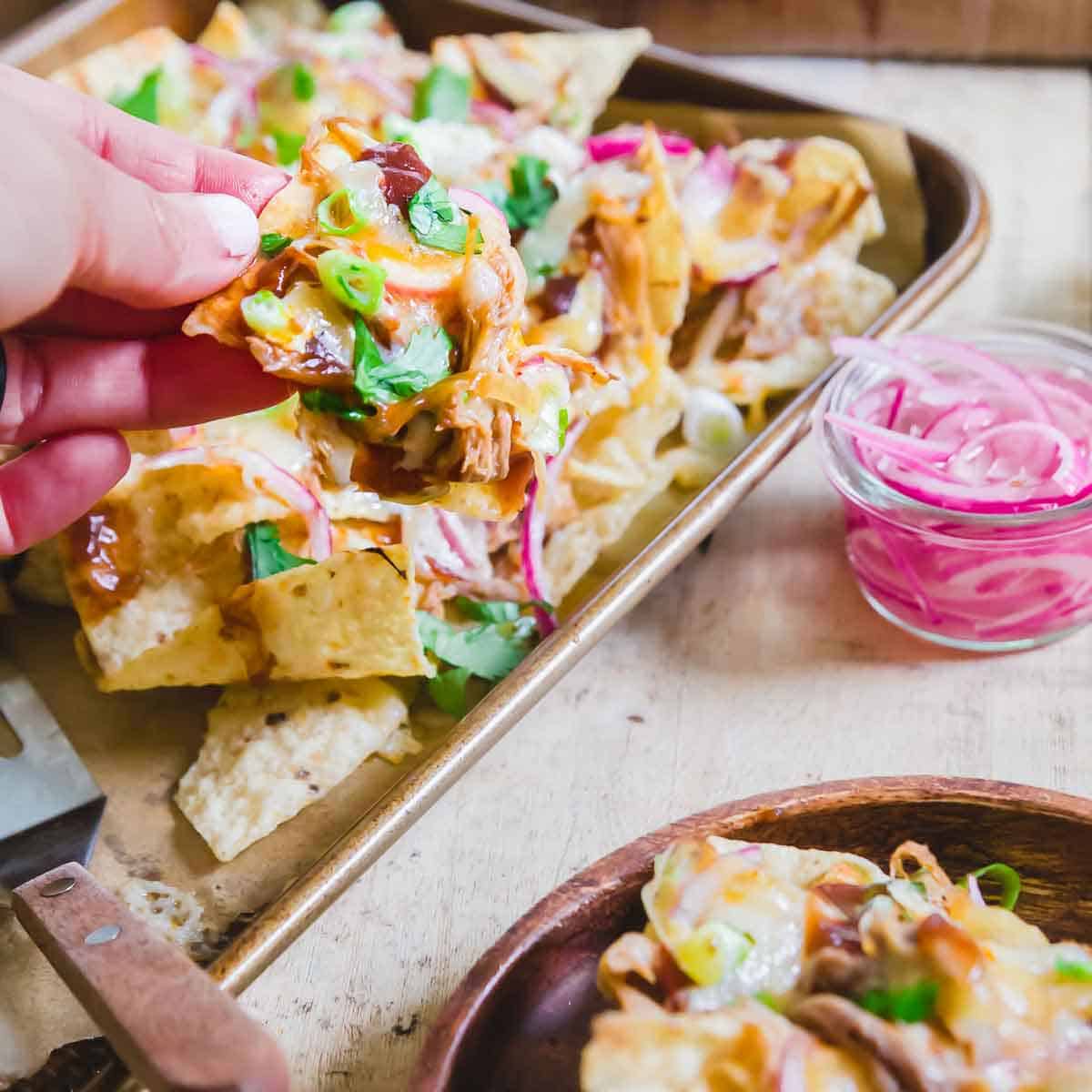 Cheddar is always a crowd pleaser but if you want some spice to the nachos, I’d try pepper jack or a combination of cheddar and pepper jack.

Cabot is my go to when I need grated cheese for things like nachos and they make a Supremely Spicy cheddar as well that’s great if you love spice.

Monterrey Jack or Colby Jack are other good cheese options for nachos. 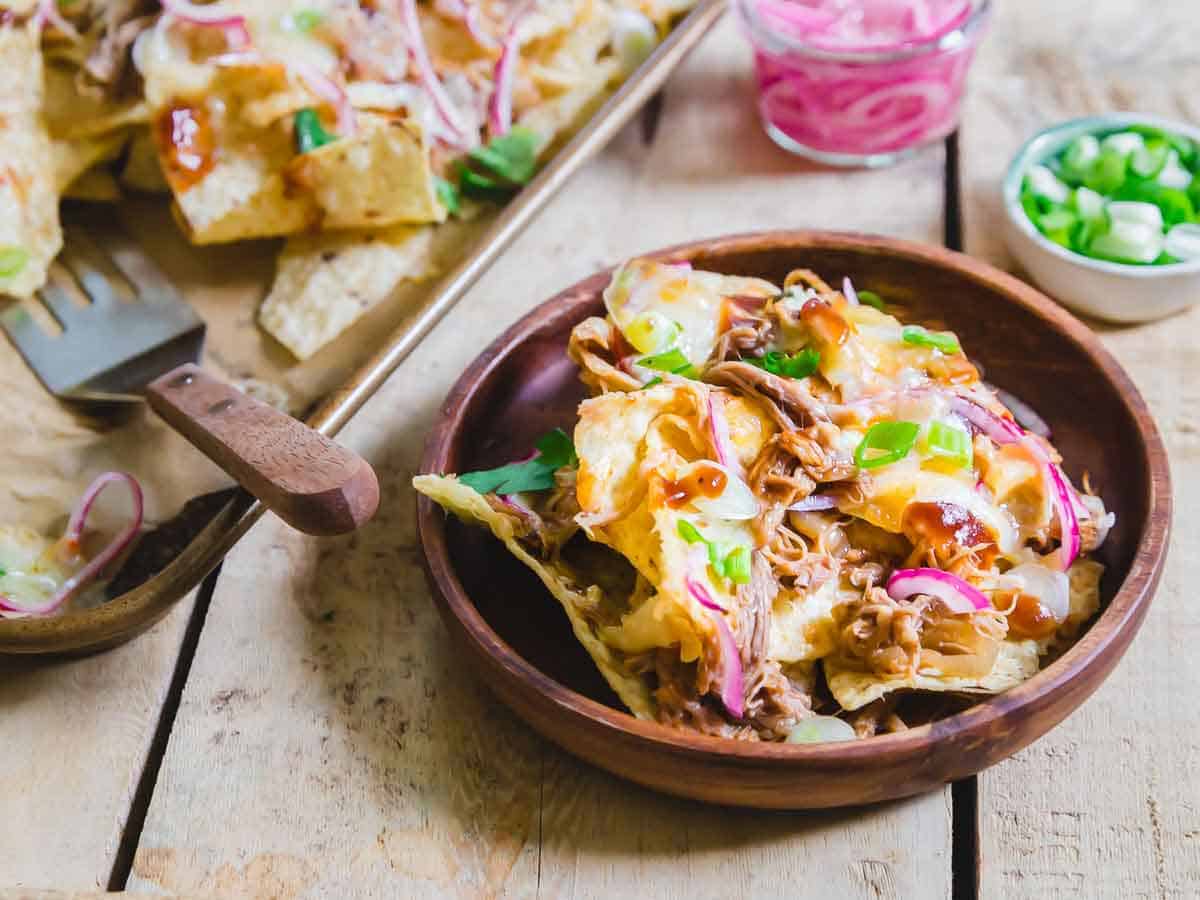 Superbowl or not, this is a great people pleaser kind of appetizer or meal.

With the pulled pork on it, you can even call it dinner and just eat the nachos straight off the baking sheet (we’ve done it, don’t judge). 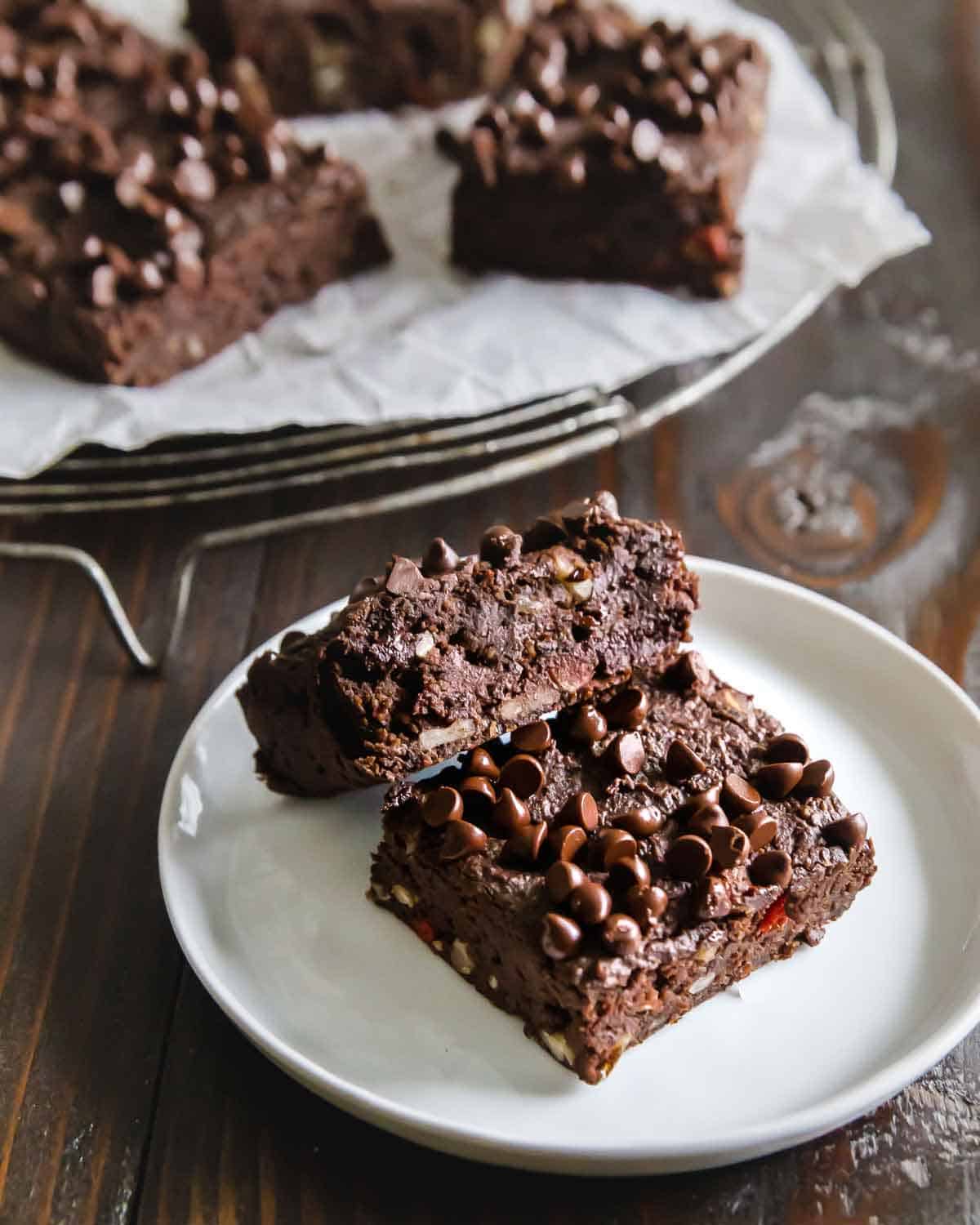 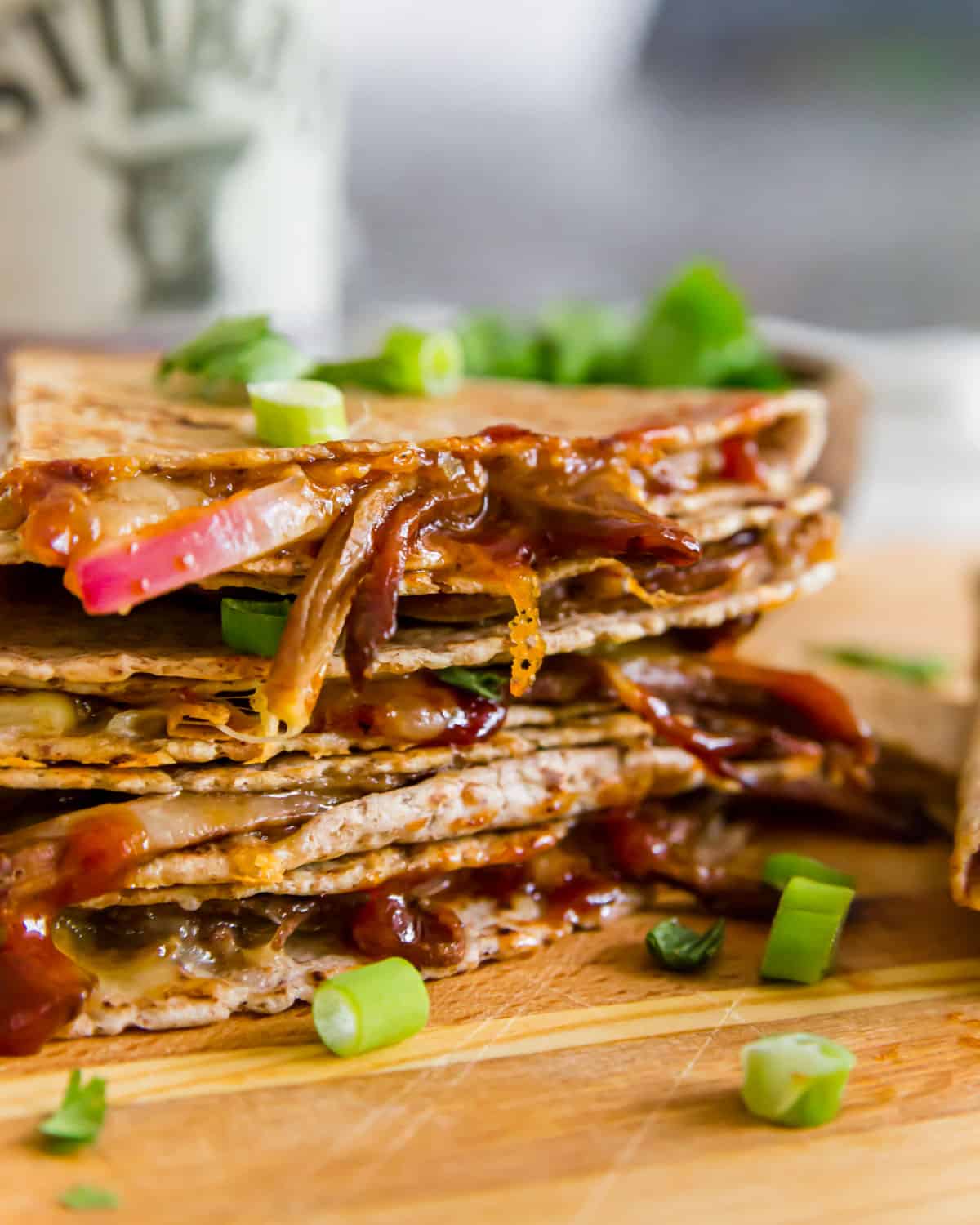