AS AN AMAZON ASSOCIATE I EARN FROM QUALIFYING PURCHASES
114 shares 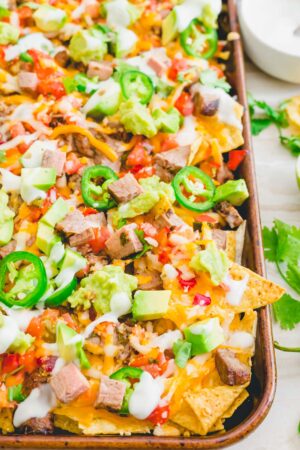 The best part about this carne asada nacho recipe is it’s kinda a two for one deal.

You get both the most amazingly delicious nachos but also a tried and true recipe for grilling carne asada.

In fact, if you make these nachos, you’ll have half the carne asada flank steak leftover to make a whole other meal out of! Maybe make some grilled stuffed avocados with it?

This is the kind of cooking I like to do. Cook once, get multiple meals.

WHAT IS CARNE ASADA?

First things first. If you’re wondering what exactly is carne asada, let’s get that cleared up.

Carne asada in Spanish literally translates to “grilled meat”. In this case, beef to be specific. Wikipedia will give you all the details if interested.

Carne asada has it’s roots in Mexican cuisine and typically involves a lime juice based marinade along with some Mexican spices like cumin and chili powder.

Although different cuts of beef can be used, most often, carne asada is made with with flank steak or skirt steak.

The lime juice and cilantro used in the preparation of the meat keeps the spice level pretty tame and fresh.

In fact, I’m often reminded of my spicy chicken lime soup or sopa de lima when I make carne asada as the flavors are so similar.

HOW TO MAKE CARNE ASADA

Since the first step in making carne asada nachos is to prepare the carne asada, let’s start with that.

HOW TO PREPARE CARNE ASADA

Place the flank steak in a baking dish that’s large enough to allow the meat to lay flat.

Stir together the marinade ingredients and pour over the steak. Flip the steak a few times in the dish to allow the marinade to fully coat both sides.

Cover and refrigerate the steak letting it marinate for at least 2 hours up to overnight.

Remove the meat from the refrigerator and bring to room temperature before grilling.

Once hot, place the flank steak on the grill and cook for about 5-7 minutes per side depending on the thickness of the flank steak. Grill marks should appear before flipping.

Remove the steak to a cutting board and let rest for 10 minutes before slicing against the grain.

Now you have carne asada and you’re ready to make some nachos!

Now that the meat is prepared and off the grill, let’s assemble our nacho ingredients.

To prepare the ingredients for the nachos:

-Thinly slice the jalapeño (only use as much as your spice tolerance dictates).

-Make the lime crema by combining 1/4 cup plain yogurt or sour cream (I use a plant based coconut yogurt) with the juice of 1/2 a lime and enough water to thin for drizzling on top of the nachos.

-Wash and chop the cilantro

HOW TO ASSEMBLE AND MAKE THE CARNE ASADA NACHOS

Preheat the oven to 400°F and lightly grease a baking sheet with cooking spray.

Spread the tortilla chips out on the baking sheet in an even but somewhat overlapping layer.

Bake the nachos for about 10 minutes until the cheese is melted.

Remove from the oven and load up the nachos with the remaining ingredients: guacamole, jalapeño slices, chopped avocado, lime crema and cilantro.

A note about lime crema:

While the lime crema is kind of optional, I always love having a “saucy” component to my nachos along with the melted cheese.

While you could go the queso route instead, I prefer the lime crema because it’s fresher and brighter in flavor and pairs well with the marinade of the carne asada.

I personally think it’s worth the extra minute or two to make, but that’s up to you. It definitely brings more of a “loaded nacho” vibe to these carne asada nachos!

Nothing worse than a tray of nachos with flimsy chips!

These are sometimes referred to as “totopos” and the brand “Xochitl” makes good ones.

TIP #2 – SHRED YOUR OWN CHEESE

I know it’s way easier and quicker to buy pre-shredded cheese but shredding your own makes for way better nachos!

Pre-shredded cheese is coated with starches or cellulose and just doesn’t melt as well.

If you’re using a plant-based cheese, this may be harder to find but for the real deal stuff, buy a block and shred it yourself!

Nothing’s worse than under-topped nachos, am I right? If you’re going to do nachos at all, they better be loaded!

In order to get a healthy amount of topping with each chip, you have to pile on the toppings.

My best advice here is to always keep your chip to cheese ratio 1:1. And then, if you’re using meat, like we are with this carne asada nacho recipe, make the meat amount at least the same if not more. So a 1:1:1 or a 1:1:1.5 ratio of chips to cheese to meat.

CAN I MAKE THE CARNE ASADA AHEAD OF TIME?

Definitely! If you want to grill the carne asada a day or two ahead of time, you can absolutely use the leftover meat to make the nachos later. The same applies if cooking the steak in the air fryer.

In fact, carne asada is one of those things that just tastes better with time. Kinda like a good chili.

If you choose to do this, just make sure to not overcook the carne asada when grilling it so it stays tender when you assemble the nachos.

CAN I USE ANOTHER CUT OF STEAK?

If you can’t find flank steak like I’m using here, skirt steak is an alternative cut for making carne asada.

You’d marinate it the same way and grill it off the same. Skirt steak will usually cook more quickly than flank steak though so be aware of that once it’s on the grill.

I actually prefer skirt steak to flank steak but find it harder to source!

These nachos are great any time of year but I particularly love them in late summer or early fall. Butternut squash pita nachos are also a great seasonal recipe for this time.

In those months, the weather is still nice enough to be outside grilling (making carne asada on an indoor grill pan just isn’t the same) and you have the excuse of football season to indulge in a tray of nachos!

While this recipe should feed about 4 people as an appetizer, my husband and I polished off the entire quarter sheet pan ourselves and called this lunch the other weekend.

MORE RECIPES LIKE THESE LOADED CARNE ASADA NACHOS TO TRY:

For the carne asada

For the carne asada nachos

SO MUCH FLAVOR! These were delicious. Can't wait to make again for parties this summer.

These nachos topped with tender, marinated carne asada are just what my Friday night needs!

It was a huge hit at my house! So good and packed full of flavors!

We made these last night and they were so good!! The lime crema was the perfect topping, I'm making that all the time now.

This is going to be perfect for game night! I love savory snacks so I'm really looking forward to this one!