Posted on Published: May 11, 2015 Categories Appetizers

These eggplant chips are flavored with an array of Mediterranean spices, made crispy in the dehydrator and perfect for snacking when paired with your favorite healthy dip.

At the end of last month I spent a couple of days in NYC visiting the Sabra factory that produces their Greek yogurt dips.

Did you even know Sabra made Greek yogurt dips? I’m not gonna lie, until last year, I didn’t even though they launched in 2010.

It’s probably just the craptastic grocery stores near me but I never saw anything besides hummus from Sabra.

Now, I totally love hummus but Greek yogurt dip? That stuff has my Greek by marriage heart.

Our trip began with a night in a rented out professional kitchen where we snacked on Greek yogurt dip, veggies, chips and the most amazing fresh berries I’ve ever tasted.

They have nothing to do with anything in this post I just feel the need to share that because I’ve literally never tasted a blackberry that good before in my entire life.

All the bloggers on the trip were in charge of one component of the meal. Brandy chose booze and I chose meat.

If you’ve watched any Kick Sass Kitchen videos, none of that should surprise you.

I actually made my balsamic dijon crusted beef tenderloin for everyone and nervously drank 2 bourbon concoctions while it cooked afraid that sans meat thermometer I was going to overcook a $200+ piece of meat.

I didn’t, it turned out fine, maybe just a little tipsy by dinnertime.

The next day we met with Sabra’s marketing team in the city before heading out to Long Island to see the factory and production.

The team showed us some new campaign ideas and thoughts about how to really get consumers to understand the key differences between Sabra’s Greek yogurt dips and other competitive brands like the fact that Sabra has more protein, fresh vegetables make up 20% of the product (and they’re 100% farm fresh) and there are absolutely no artificial flavors.

When we walked into the factory and one of the first things I saw were HUGE containers of freshly diced cucumbers and an employee seeding bell peppers by hand, everything the marketing team had told us earlier came to life.

I don’t know why I assumed it wasn’t, but I was a bit surprised to learn that.

One of the two factory buildings is completely devoted to making the Greek yogurt itself before the vegetables get mixed in and packaged for distribution.

We ended the tour with a sampling and we all attacked the dips, veggies and chip spread like we hadn’t eaten breakfast just 3 hours earlier.

All the dip tasting got me thinking which I preferred more, the chip + yogurt dip or the veggie + yogurt dip combo and honestly, it was a toss up.

I’d go back and forth multiple times and never really decide on a clear cut winner. Which is why I decided veggie chips would be the ultimate dipping accessory.

All the veggie benefits with the crispness and crunch of a chip…perfect. Just like these crispy air fryer zucchini chips.

Since I still happened to have Brandy’s dehydrator at my house after making the buffalo sauce beef jerky, I gave it another go.

This time with eggplant.

I’ve more than once admitted I’m not an eggplant lover.

Not a hater, just not a lover.

Unless it’s fried to a crisp or in the form of ‘pasta’ as eggplant noodles, it’s pretty hard to get me to enjoy the mushy purple veg which is exactly why I chose to dehydrate it into chip form.

Because I’m stubborn and refuse to give up on foods I don’t like and I had this sneaking suspicion when the mushy factor was all dried up, it’d make an excellent chip.

And it totally did.

Seasoned heavily with some Mediterranean-esque spices, these eggplant chips make the perfect dippers for the Mediterranean herb dip or, any of the dips for that matter.

I might be having a love affair with the diced onion lately.

You could also try these eggplant chips in an air fryer too or, just try my crispy air fryer eggplant recipe instead!

Use a dehydrator (or an oven) to make this eggplant jerky recipe too. It’s very similar to these chips just more “jerky” like in appearance. Great for dog treats too!

*This post is sponsored by Sabra as part of my work with them as a Sabra Tastemaker. All content and opinions are my own 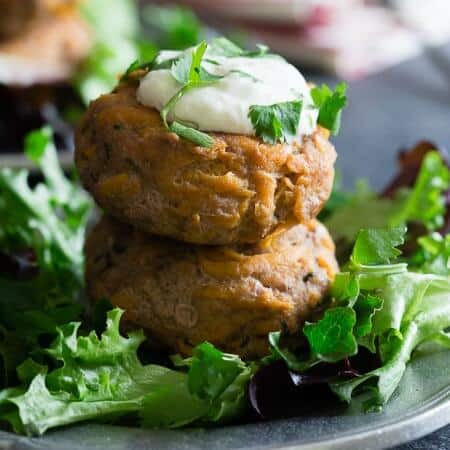 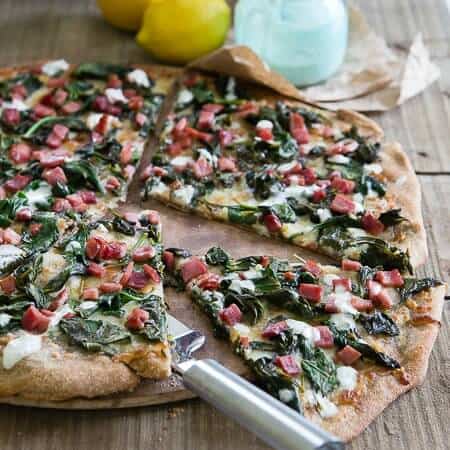 Trying to figure out why the carb count is so high-75 grams. Is it the dip?

The nutritional information is an estimate. The program that's calculating it may be misjudging the size of a "baby eggplant" as listed in the ingredient list. If you want an accurate nutritional snapshot, it's best to weigh the eggplants and calculate yourself based on what you're using. The dip is not factored into the breakdown here since it's not in the recipe card so really the only thing affecting the carb count would be the eggplant itself.

I tried this but the eggplant never got crispy - it just shrank and got chewy. Same when I tried to make cauliflower popcorn. What am I doing wrong?

@Jennifer, Same for me. Not so much crispy as thin cardboard

What are we doing wrong?

Probably could use your oven down low. Mine goes down to 250 or 225. Got to try Zatar which is my favorite spice now. Just harvested maybe 10 lbs of eggplant. Will use this recipe. Thanks,

I made these chips using eggplant sticks, they were a bit small which made them dry quickly and they were gone just as quickly! They were soooo good, no dip needed.

I love to eat eggplant fries and these are next on my list. I cant wait to see if I can get them super crispy like yours! Pinned!