AS AN AMAZON ASSOCIATE I EARN FROM QUALIFYING PURCHASES
89 shares 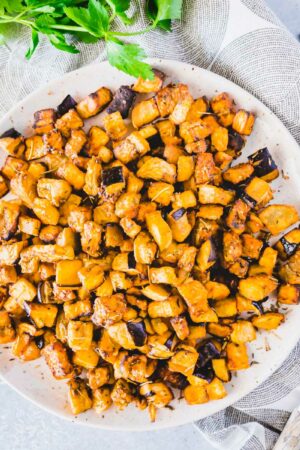 This simply seasoned air fryer eggplant comes out crispy and delicious. It’s an easy side dish everyone will absolutely love and goes with almost any main course.

You know, it’s kinda a shame that most recipes out there for eggplant involve breading and cheese.

Not that I don’t love both those things but I think it’s doing eggplant a disservice. As if the vegetable can only be truly enjoyed when those ingredients are involved.

Well, this air fryer eggplant recipe is here to prove that otherwise!

This is the kind of recipe the air fryer was born for.

A sometimes mushy vegetable that tends to get an undeserved bad rap?

Throw it in the air fryer and it’s like a complete makeover!

After 18 minutes, the eggplant emerges victorious in a seriously flavorful and crunchy way.

HOW TO PREPARE EGGPLANT FOR THE AIR FRYER

To get the best tasting and textured eggplant, there’s a few simple steps to follow to prepare it for the air fryer.

I say roughly because it’s not imperative that all of the purple skin is removed. In fact, a little bit left intact creates even more texture after air frying.

And texture is what we’re after!

Next, slice the eggplant in half lengthwise.

Cut each half of the eggplant in half again horizontally. Then, make thin slices lengthwise down the entirety of each half.

Now, chop into cubes by cutting perpendicular to the long thin slices you just made.

The result should be cubes about 1″ or so big. Don’t worry if they’re not all completely uniform in size.

Either place the eggplant in a mesh strainer or colander over a large bowl as shown above or, spread the eggplant out onto a large flat surface.

If using the strainer approach, just make sure to toss the eggplant a few times while salting so all the pieces are exposed to the salt.

Let it sit for 15-30 minutes so that the eggplant can “sweat out” its moisture.

If using the strainer, you’ll see the water accumulate in the bowl below. It’s amazing how much water the eggplant holds when raw!

No matter how good your air fryer, if you don’t pull out all that moisture ahead of time, no amount of air frying or roasting will result in perfectly crispy eggplant.

Once salted, pat dry with a paper towel or kitchen cloth then place in a large bowl.

Pour the avocado oil into the bowl and toss to coat.

Add the spices and stir until each piece of eggplant is evenly spiced.

It’s a basic combination that leads to some serious flavor packed into these crispy eggplant cubes but feel free to play around with any seasoning mixture you like.

HOW TO AIR FRY EGGPLANT

Now that the eggplant is prepped, spread out onto the trays in the air fryer (or place in the basket if you have that model).

Air fry at 400°F for about 18 minutes until golden brown around the edges and crispy.

Using an oven type air fryer with the trays, I don’t have to toss mine halfway through cooking. But, if you have the basket model, you may want to give it a good shake once or twice.

It’s also important not to crowd the eggplant on the trays or in the basket.

One large eggplant fits perfectly on the trays of my Pampered Chef air fryer.

Basket models tend to fit a little less so you may want to use a smaller eggplant or air fry in batches.

If you have leftovers, they will keep stored in a container in the fridge for a few days.

My preferred way to reheat is either in a toaster oven or right back in the air fryer.

Both those options help the eggplant to remain crispy when reheating compared to using a microwave.

HOW TO SERVE AIR FRIED EGGPLANT

As someone that didn’t always love eggplant (which I talk about in this recipe for eggplant fries and eggplant chips), it’s downright comical how much I love eating eggplant made in the air fryer.

This side dish goes with almost any meal you can think of.

From a simple pork chop skillet dinner to a Porterhouse steak skillet or some air fryer tofu, it will consistently elevate your plate.

I also find it delicious in any “bowl” type meal.

Shown below with some brown rice and chickpeas, it rounds out the vegetable component to an easy vegetarian meal like that. Drizzle your favorite dressing or some tahini on top and call it a day!

Nothing against eggplant parm but this air fried eggplant definitely makes a big statement that the vegetable can stand alone and be delicious in its own right.

After air fryer zucchini chips and air fryer cauliflower gnocchi, I wasn’t so sure how the air fryer could do much better than those two recipes (they’re both so simple yet so transformative!).

But, I think it’s once again outdone itself and permanently earned its spot in the countertop appliance cabinet of my kitchen. 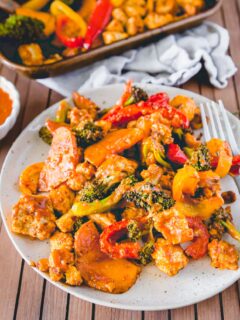 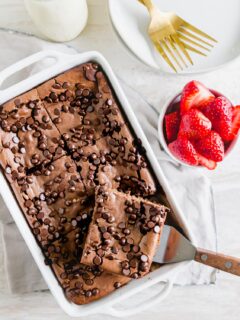 OMG how clever! I never made eggplant in an air fryer! This would be a great side for chicken