Use leftover shredded beef brisket to make these easy but insanely delicious loaded BBQ brisket nachos. They’re great as a party appetizer, dinner or addition to a game day spread and easy to customize to your topping preferences!

When given the option to add meat to nachos at a restaurant, I always add the meat.

Nachos without meat are just not worth it in my opinion. It’s a cop out appetizer and usually unworthy of the price tag.

If a nacho recipe doesn’t have meat it’s at least got to have beans.

I’ll accept a bean only nacho but without either, it’s sorta just like the salad bar threw up on some tortilla chips and that’s just downright unacceptable.

These brisket nachos, however, have both beans and meat.

With hearty pinto beans and leftover shredded beef brisket, THIS is how nachos should be done.

Not to mention, BBQ sauce. Because that’s another “must have” element to my nachos.

Now that we’ve gotten my stringent nacho requirements out of the way let’s discuss these loaded brisket nachos.

Obviously, we start with a base of corn tortilla chips to make brisket nachos. Duh. Pick your favorite brand/type and roll with it.

That’s the boring part, the toppings are what make this brisket nacho recipe the best.

When choosing toppings, I go for color, texture and flavor.

There’s enough cheese to get a melty pull but not so much that it overwhelms the rest of the ingredients. I am not a fan of the cheese sauce type of nachos. No sir, not for me!

And of course, with the brisket and beans, this is a hearty combination that can easily double as a main dish instead of an appetizer if you prefer.

There’s a lot going on in each bite and that’s exactly the way I want my nachos.

There’s nothing worse than a wimpy nacho with too little cheese and barely any other toppings. If it ain’t loaded, it basically has no business being a nacho. Ya know?

My Instant Pot brisket recipe has a nice light BBQ sauce that it cooks in.

When I shred the leftover brisket (for recipes like these nachos, brisket chili or brisket quesadillas), it keeps a nice BBQ flavor from sitting in the sauce.

If the you’re using leftover brisket that hasn’t been sitting in BBQ sauce, just mix the shredded brisket with a couple of tablespoons of BBQ sauce before using it in the nachos.

As evidenced in these BBQ pulled pork nachos, I just love the combination of BBQ sauce and meat on top of nachos.

It brings the perfect smoky, salty flavor to contrast with all the fresh vegetables and melted cheese.

Often times, nachos are made on a baking sheet.

I’ve done it before with recipes like buffalo chicken Triscuit nachos and lamb nachos but I find that making them in a cast iron skillet is even better as it retains the heat longer and keeps the nachos warm.

Nothing’s worse than cold cheese on a random tortilla chip off to the side of a nacho platter!

Using a skillet also helps you build height to the nachos when preparing them.

The more height, the more layers you can get. The more layers, the more opportunity to intersperse all the delicious toppings, especially the cheese and brisket!

WHAT TO SERVE WITH BRISKET NACHOS

Sometimes the garnishes are just as important as the main dish. For nachos, I think this holds true.

I like to serve extra BBQ sauce, avocado slices (instead of guacamole), lime wedges, fresh cilantro, chopped green onions and sometimes sour cream or Greek yogurt on the side.

The squeeze of fresh lime juice or, a dollop of tangy Greek yogurt/sour cream is a must have with the savory BBQ flavor of the brisket in these nachos.

Pick whichever garnishes appeal to you but definitely make sure to include at least one of those!

Whether it’s just because you need to use up some leftover brisket or it’s the ultimate game day recipe spread – these brisket nachos won’t disappoint.

If ever there was an ultimate nacho, these are it!

And check out my Instant Pot brisket web story to see how easy it is to make it! 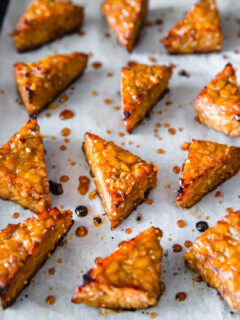 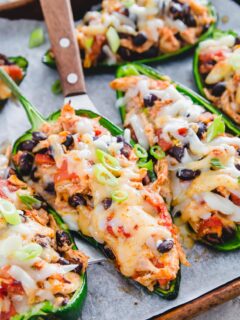 These were amazing. Even my picky eaters enjoyed it.

These look so delicious! My family is going to love this recipe! I can't wait to give this a try! So excited!

These nachos are calling my name. What a great way to use bbq brisket!

Wow, really amazing nachos recipe with so much color, flavor, and texture. I love this creative way to use up leftover brisket! And yes, nachos need meat and beans.