AS AN AMAZON ASSOCIATE I EARN FROM QUALIFYING PURCHASES
38 shares 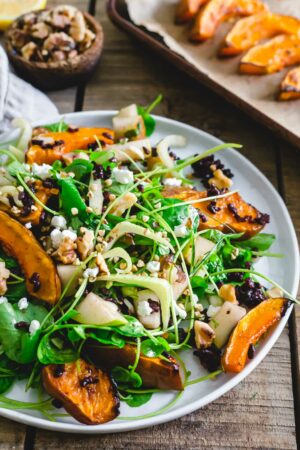 Enjoy the wonderful display of seasonal ingredients in this koginut squash bowl made popular by chef Dan Barber and a collaboration with Sweetgreen.

Pears, walnuts, toasted buckwheat, black wild rice, fennel, goat cheese and greens are tossed in a simple balsamic vinaigrette to create one of the most stunningly delicious fall meals possible.

Last year I discovered koginut squash during a trip to Trader Joe’s.

Having never seen the squash before, I of course threw it in my cart, brought it home, researched the heck out of it and eventually roasted it to make this koginut squash salad.

It’s a recurring theme with me and squash. No idea what it is? Just throw it in the cart and figure it out later.

Sometimes, that approach turns out deliciously and you get roasted sweet dumpling squash and Thai buttercup squash soup.

So when I saw koginut in the bin again at Trader Joe’s this year, knowing I ended up loving it last time, I bought two.

In my extensive koginut squash research last year where I learned it’s a hybrid squash developed by one of my all-time favorite chefs, Dan Barber from Blue Hill, I also learned he collaborated with Sweetgreen, the restaurant chain, to create a koginut squash bowl for its debut appearance in 2018.

I’ve never been to a Sweetgreen restaurant (they seem to be densely populated in cities and don’t have a location anywhere near me) so I never got to personally try the koginut squash bowl but, the ingredients looked so inspiring for this time of year I decided to recreate my own version at home.

Ps- if you’re this far in and wondering how to pronounce koginut squash, it’s simply: ko-gee-nut.

There are some usual suspects in this recipe when making a grain bowl like rice, squash and greens but chef Barber adds a handful of unique elements that really deliver in both flavor and texture.

For the baby greens, the original recipe calls for spinach but I decided to use baby watercress instead. I don’t particularly love raw spinach as a salad base but adore watercress.

It’s a lovely green that packs a little kick of peppery flavor (not as much as arugula though) and is highly nutritious as well.

For the rice, I decided to use Forbidden black rice instead of wild rice (Lotus Foods makes a great one).

If I’m not cooking white rice, I always gravitate towards black rice. Its dark color correlates to some impressive added health benefits from the anthocyanins. (source)

Pears are just a wonderful meal addition this time of year. Apples usually get all the attention in fall salads (like this mizuna lettuce salad) but a ripe, juicy pear is highly underrated!

I cook with buckwheat here and there, often adding it to stovetop oatmeal recipes like apple cinnamon oatmeal or gingerbread oatmeal this time of year for some extra chew but it never occurred to me to use it as a salad topping!

When toasted along with the walnuts, the buckwheat groats become nutty and almost “popcorn-like” to create the perfect crunch with each bite. They’re a textural must for this squash bowl recipe.

HOW TO MAKE THE KOGINUT SQUASH BOWL

First, roast the koginut squash and make the rice.

Dan Barber says his favorite way to prepare koginut is just to roast it with salt and a touch of oil.

I do agree it needs little more than that to enjoy its wonderful sweet flavor and creamy texture but if you have some Chinese 5 spice powder on hand, sprinkle a touch of that on the squash before roasting.

Chinese 5 spice is a mix of both sweet and savory spices and one of my favorite seasonings for squash this time of year. It adds a nice little touch of fall flavor to the roasted koginut squash.

Check out this 5 spice cream cheese chicken recipe too – love that meal for easy dinners!

Prepare the rice as normal. Leftover rice works well for this squash bowl if you have some on hand.

While the squash roasts and the rice cooks, toast the walnuts and buckwheat in a small skillet until slightly browned. Set aside.

Next, combine the greens, basil, fennel and pears in a large bowl.

Whisk together the simple balsamic vinaigrette ingredients in a separate bowl then pour into the bowl with the salad greens.

Toss together until well combined.

Add the koginut squash once out of the oven along with the cooked rice and gently toss again.

Top with the toasted walnuts and buckwheat groats and crumble the goat cheese on top before serving.

But with this squash bowl, the ingredients were just calling to be tossed together more like a salad.

Getting a bite of each component on your fork from the tender watercress to the juicy sweet pear to the crunchy nutty buckwheat groats and creamy tart goat cheese is an integral part of the flavor experience when eating this squash bowl.

So you can serve it however you like but, I suggest the salad “tossed” approach more so than a traditional “bowl” one.

SQUASH – if you can’t find koginut squash in your area, choose another similar squash. Koginut has an edible skin like buttercup squash, delicata squash and honeynut squash which makes it easy when preparing.

Its flavor is delicately sweet and buttery and texture incredibly creamy. Butternut squash is your best more “popular” bet but I’d sooner pick buttercup, sweet dumpling or honeynut if possible.

NUTS – swap out walnuts for pecans if preferred. Hazelnuts would also be great in this recipe.

BUCKWHEAT – if you don’t have buckwheat groats on hand, you can usually find them at a natural store’s bulk bin section. I do recommend keeping some on hand as they’re a nutritious gluten-free grain that you can make overnight buckwheat groat oatmeal with or even buckwheat risotto. It’s sold in flour form too and buckwheat pineapple pancakes are such a fun weekend breakfast!

No buckwheat? Popped amaranth is another gluten-free alternative.

If neither are possible, swap out for something more accessible like sunflower seeds or pepitas. Roasted squash seeds (using the koginut squash seeds of course) would be perfect!

RICE – any rice variety will do. I would use brown rice for its heartier texture than white rice in this recipe if black rice isn’t possible.

WHAT ELSE CAN I DO WITH KOGINUT SQUASH?

Since both recipes I’ve now made with the squash have involved roasting it, let’s discuss some other ways to use it as well.

Of course, it can be stuffed for a full meal. I’d love to try it with the stuffing in these stuffed delicata squash.

This creamy coconut delicata soup is also good inspiration for making a soup with koginut.

Besides serving in a savory way, try roasting koginut with some butter, cinnamon and other sweet spices in either halves or quarters and filling with yogurt for breakfast.

I also like to freeze roasted squash for smoothies. Instead of the pumpkin in this gut healing smoothie, use frozen koginut squash cubes!

Making creamy sauces using squash as the base for a sort of “faux mac and cheese” is also one of my favorite ways to indulge in a cozy carby dinner this time of year.

Use this creamy pumpkin garlic pasta as inspiration to swap out the pumpkin for cooked and mashed koginut squash instead.

It’d also be great as a simple mashed squash dish. Either roast or steam then mash the koginut. Top it with some butter or ghee and fresh herbs for a simple side dish, a wonderful alternative to mashed sweet potatoes.

Hope you’re able to find koginut near you and give this recipe a shot. I’ve found them at Trader Joe’s as mentioned as well as some local markets. If TJ’s isn’t an option, local farmer’s markets are probably your next best bet.

I wish I could’ve tasted the real thing at a Sweetgreen location a couple of years ago but I’m pretty sure I like my version even better!

This was so good!! A must-make for fall!

Oh! This looks amazing. Can't wait to try it this weekend.

I see these all the time but never knew what to do with them. Thanks for sharing this recipe!

I love squash and this looks like a delicious way to eat it. So vibrant!

Filling dinner salads are my favorite! This one was amazing!