Koginut squash is a delicately sweet mix of butternut and kabocha squash. It’s tender and buttery with an edible skin and absolutely delicious roasted with savory sweet spices atop this fall inspired salad!

As if I didn’t already have enough reasons to love Trader Joes, I now have another: the koginut squash.

It was during an impromptu trip to a store I don’t normally go to a couple weeks ago when I saw this new to me squash.

The same trip I bought the Brussels sprout stalk!

Of course I grabbed it and thew it in my cart. I mean, how could I not? Look at how cute and adorable it is!

I paid no mind to the sticker on the side of it telling me what it was until I got home, took a look: “koginut squash”.

But koginut squash? Never heard of it.

So, I googled. Obviously.

Turns out koginut squash is pretty new to the scene (hence why I hadn’t heard of it).

In fact, it was just “created” a couple of years ago as a collaboration between Dan Barber (chef at Blue Hill at Stone Barns – which I’ve had the amazing pleasure of dining at twice and both were my favorite food experiences ever) and Row 7 Seeds.

The result is an incredibly buttery, mildy sweet tasting flesh with an edible skin and creamy texture.

Probably not much of a concern to consumers but for the growers, it’s got a neat built-in ripeness feature where it turns from green to golden when ready to be picked. How handy!

The squash was actually picked up by Sweetgreen, the salad chain last year and used in their “Koginut Squash by Dan Barber bowl”. Combined with spinach, wild rice, pears, fennel, basil and goat cheese, the roasted koginut squash is the star of the show.

It was a pretty innovative and risky move to throw such a completely new item on a chain restaurant menu across the country.

But, if you can get your hands on a koginut and taste this squash, I think you’ll easily see why it was a risk worth taking.

HOW TO COOK KOGINUT SQUASH

Like most squash, well maybe besides spaghetti squash, koginut is absolutely delicious when roasted.

Roasting is my preferred method with this squash especially because the skin is edible!

Roasting at 400-425°F with your preferred seasonings (I highly recommend a drizzle of maple syrup no matter which seasonings you choose!) until golden around the edges, fork tender and just starting to caramelize on the baking sheet is quite simply fall perfection.

You can cut the squash into slices/wedges like I’ve done for this salad. Or, even easier, just slice in half, remove the seeds and roast the halves whole with a generous pat of butter and drizzle of maple syrup in the cavity.

Baking or steaming the squash is also possible.

It would make a great pureed option when baked to swap out for pumpkin puree in baked goods and such.

I also have plans to make a koginut squash soup (following the method for this delicata squash soup) next time I get back to the store to grab another!

Although, it’s really hard to pass up on eating this squash just simply roasted. It’s the best textured squash I’ve ever eaten.

Roasting it is not only the easiest method, but also the best way to enjoy that divine texture.

For this fall salad recipe that uses shredded brussels sprouts as the base with pops of bright, tart pomegranates and pecan halves in a warm apple cider shallot dressing, we first need to roast the koginut squash.

Preheat the oven to 425°F and line a baking sheet with parchment paper or a silicone baking mat.

Cut the squash into wedges about 1/3″ wide and arrange in a single layer on the baking sheet.

Drizzle the squash with avocado oil then season with salt, pepper, garlic powder, cinnamon and a drizzle of maple syrup.

Roast the squash for about 35-40 minutes until fork tender and golden brown around the edges. Flip halfway through so both sides of the squash slices brown evenly.

Remove from the oven when done roasting and place atop the salad while still warm.

HOW TO MAKE THIS FALL SALAD

While the squash roasts, assemble the salad base. Thinly slice or shred the brussels spouts and place them in a large bowl.

Make the dressing in a small skillet by sautéing the olive oil and minced shallots over medium heat.

Once softened, add the apple cider, apple cider vinegar, maple syrup, salt and pepper. Simmer for a minute or two then pour directly on top of the brussels sprouts in the bowl. Toss to fully coat and combine.

Add the pomegranate arils and pecans to the bowl and toss lightly.

Once the squash is done roasting, add to the bowl and serve warm.

The warm apple cider dressing is reminiscent of a hot bacon dressing (minus the bacon obviously). Replacing the salt from the bacon, are lovely sweet and tart flavors from the apple cider and maple syrup.

It’s almost like a fall version of the traditional bacon dressing. I love how it sort of “cooks” the shaved brussels sprouts when they’re tossed together in the bowl.

Brussels sprouts can be a bit much raw especially in any sort of volume. The warm dressing and hot roasted koginut squash straight from the oven, temper that a bit.

Each bite of this fall salad has a bit of crunch, sweetness, tart brightness and warming spice. It’s fall all together on a plate and I think it might just be your new favorite squash if you can get ahold of one to try!

I’m not yet sure of our Thanksgiving plans, but I can tell you one thing that is set in stone whether it’s just us two or my entire family, koginut squash will be on the table.

Most likely, it will be roasted in some capacity. And, also most likely joining a few other Thanksgiving staples like my 5 Ingredient Slow Cooker Cranberry Sauce and Sausage Cranberry Apple Stuffing Muffins.

If I’m ambitious and actually do a small turkey (last year my family had salmon so there’s no guarantees on that!), I had the idea to take this recipe for Apple Butter Roasted Chicken and do it with a turkey instead!

*If you can't find koginut squash, this recipe can be made with kabocha or buttercup squash. Both also have edible skin and a similar flavor profile. 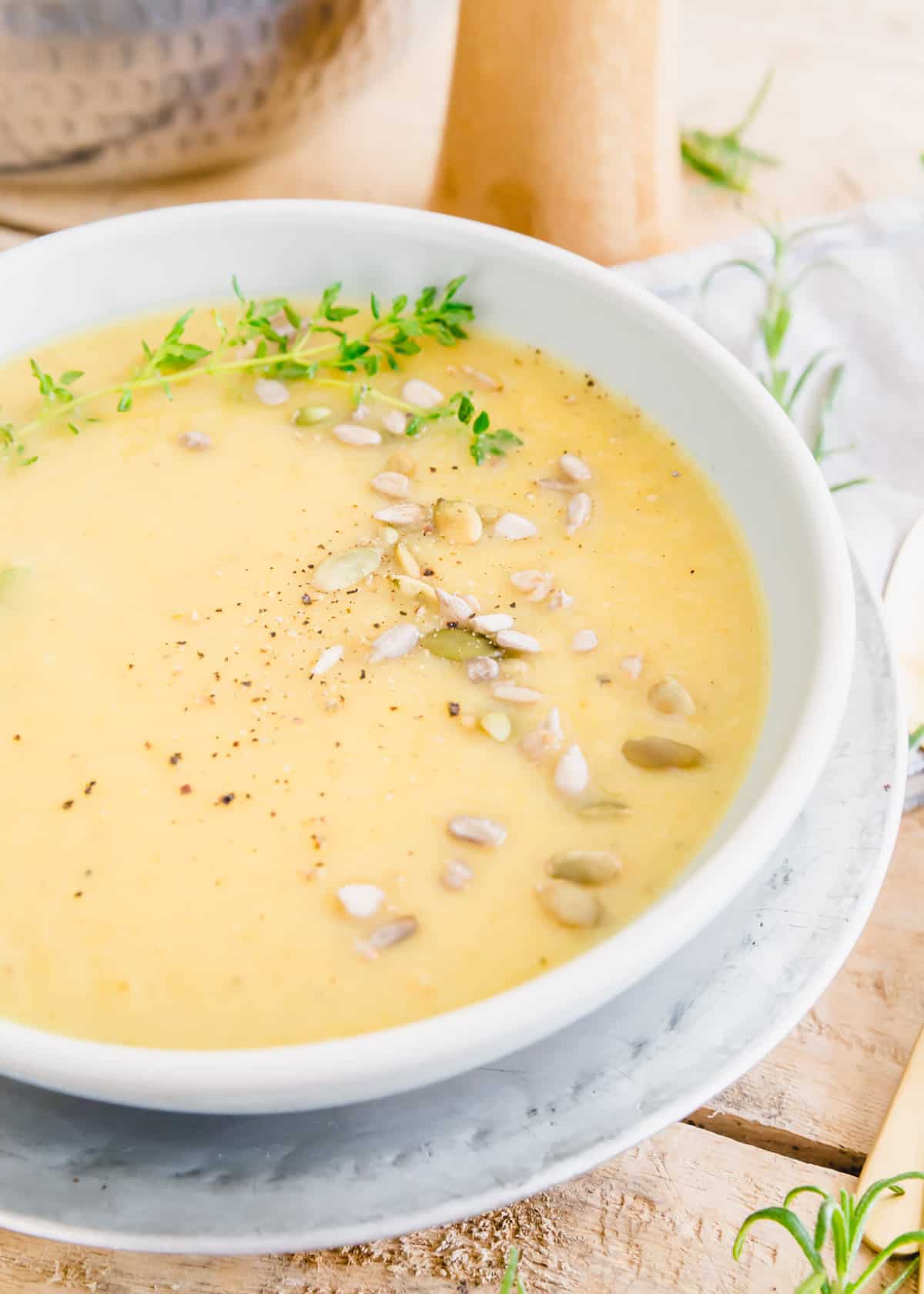 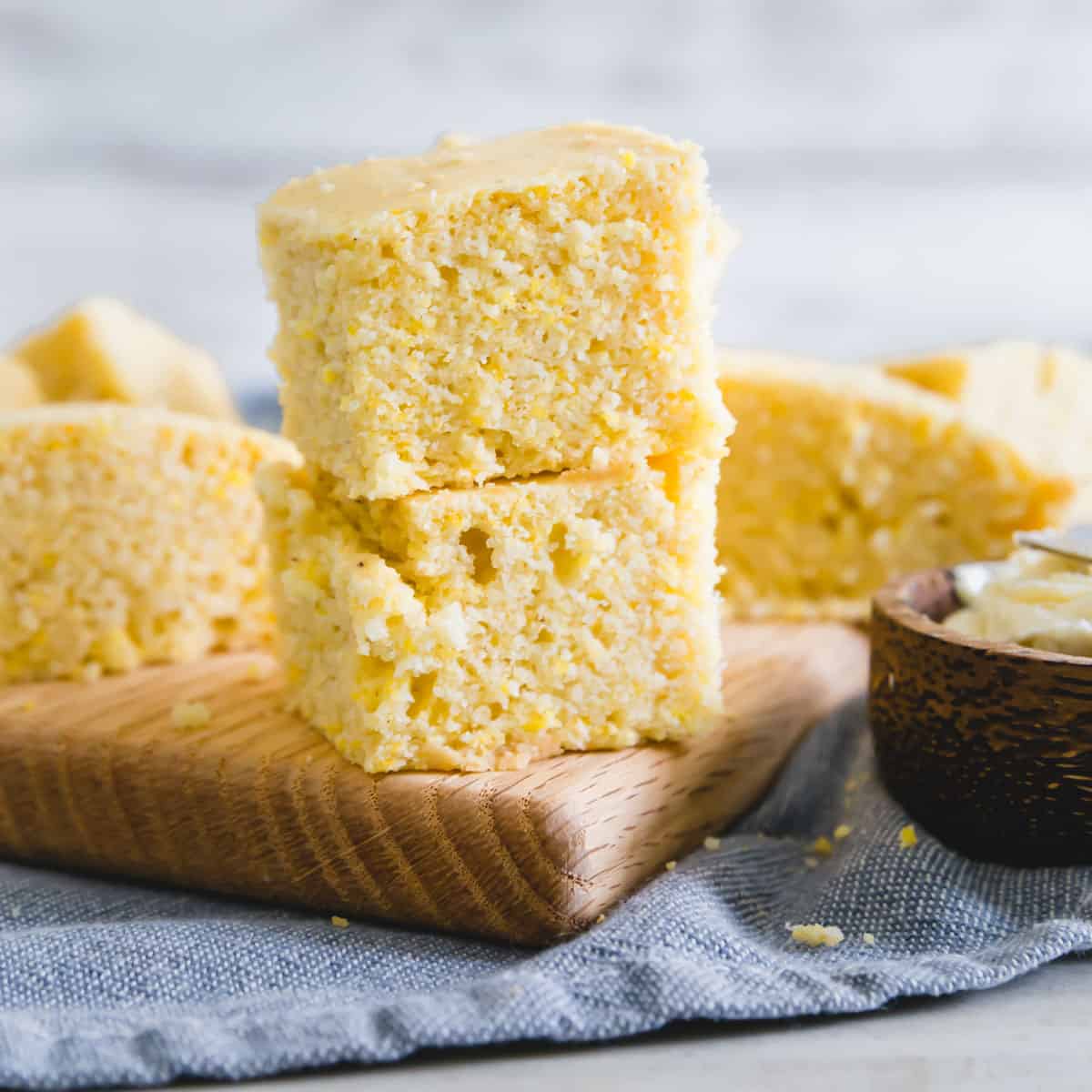 Love how easy this recipe is. It’s perfect for our family!

haha I have my favorite squashes and the ones I know nothing about. Thanks for enlightening me, this looks delicious!

I am literally off to Trader Joe's this morning to find this squash, it's adorable and looks so yummy in your salad!

Haha, I'm going back there today too and hopefully grabbing a bunch more myself!

Yummy! This looks so delicious and tasty! I can't wait to give this a try! My husband is going to love this!