AS AN AMAZON ASSOCIATE I EARN FROM QUALIFYING PURCHASES
77 shares 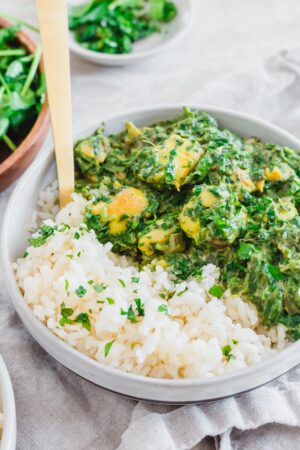 For the most part, these dishes are all essentially the same.

We’ll go over some of the differences below but if you’re looking for a quick and easy curry dinner packed with flavor that can serve as a complete meal with a simple side of rice, this chicken saag recipe is just the thing.

This is a full on comforting meal with spices doing the heavy lifting to bring intense flavor.

Convenient frozen spinach along with coconut milk and yogurt creates a luscious sauce that makes this creamy saag dish everything you’d expect from a takeout or dine-in Indian restaurant in the comfort of your own kitchen.

You’ll notice there aren’t a ton of ingredients needed to make this spinach and chicken curry dish outside of the spices.

And even with the list of spices, they’re all pretty standard Indian spices you should definitely have on hand!

For the saag curry:

HOW TO MAKE SAAG DAIRY-FREE

This chicken saag is actually a dairy-free version of the traditional recipe. Much like lamb korma, I prefer to modify the conventional dairy ingredients to keep things dairy-free.

Typically, saag uses heavy cream or half and half to create the creamy spinach mixture.

With a simple swap of coconut milk and coconut yogurt, saag can be made dairy-free.

It’s important to stick to both coconut milk and yogurt instead of other dairy-free options like almond milk to mimic the more decadent creaminess of traditional heavy cream or half and half.

Almond milk is too thin and watery to be a good substitute.

I use and love the thick texture of the Culina yogurt brand when trying to mimic real dairy.

If you don’t have a need to make the saag dairy-free you can use regular cow’s milk yogurt and cream.

HOW TO COOK CHICKEN SAAG CURRY

Start by seasoning the chicken with the turmeric, cayenne and salt. Add the ghee to a hot skillet and when melted, place the chicken in the pan. Cook until browned on all sides then transfer to a plate and set aside.

Cook the frozen chopped spinach in the microwave according to package directions. Strain the spinach of most of the excess water in a mesh strainer then transfer to a blender along with 1/2 cup of the coconut milk. Blend until smooth then transfer to a bowl and set aside.

Heat the other tablespoon of ghee in the same skillet over medium-low heat. Once hot, add the onion, ginger and garlic. Cook for about 10 minutes until the mixture softens and turns a nice deep golden brown color. Stir often so the onions cook evenly and don’t stick to the pan.

Add the spices and cook for another 2-3 minutes until very fragrant. Add a tablespoon or two of water to the skillet if necessary during this time to keep from sticking.

Transfer the blended spinach mixture into the skillet and add the yogurt and remaining coconut milk. Stir until well combined. Add the chicken back into the pan and nestle into the spinach mixture. Simmer for 4-5 minutes until chicken is cooked through.

Season to taste with salt and pepper. Garnish with freshly chopped cilantro and mint before serving.

Enjoy with some cooked basmati rice or naan bread.

Without a lengthy ingredient list, a good chicken saag relies heavily on the browning of the onions.

Despite this being a quick 35 minute meal, this is a step that cannot be rushed in the process of making saag.

At an Indian restaurant, many curry dishes often start with the same curry base. This is essentially an onion based mixture with all the typical curry spices that has been cooked down and pureed.

Because we’re making a simplified at home version, we won’t be doing that.

But, we’re still relying on the same spices to create that quintessential curry vibe along with some extra time given to the onions, garlic and ginger to develop the necessary deeply caramelized flavor that a traditional “base” would have.

Take your time when browning the onions, garlic and ginger in this recipe. Keep the heat at a medium-low setting and stir frequently to encourage even browning and caramelization.

If you find the mixture is drying out, add a small splash of water to keep it going until the onions are nicely browned. This can take anywhere from 10-15 minutes.

Be patient, the resulting flavor of the finished saag dish is worth it!

HOW TO SERVE CHICKEN AND SPINACH CURRY

Whether you’re enjoying red curry shrimp, winter vegetable curry, red curry vegetable lentils or, this saag curry, the simplest way to serve this dish is with some cooked basmati rice.

The turmeric rice in this Instant Pot coconut pork is another great pairing.

Freshly warmed naan is another option that always works well with a curry.

HOW TO STORE LEFTOVERS

Leftovers can be transferred to an air-tight container and kept refrigerated for up to 5 days.

Reheat simply a the skillet or sauce pot over medium-low heat. You can add a touch of extra coconut milk to thin the sauce out if desired.

Alternatively, reheat in the microwave in 30 second increments, stirring in between.

WHAT IS CHICKEN SAAG MADE OF?

People often wonder what saag sauce is made of as it’s a less “popular” menu item (versus dishes like tikka masala, etc.)

Saag is a classic Indian dish that can be made with any bitter greens such as mustard greens, dandelion greens, kale, chard or collard greens.

Although, my favorite way to eat collards is as this spicy collard greens recipe.

However, spinach leaves are most commonly used especially when recreated in the United States for their general appeal and milder flavor.

Because saag is a sauce based upon green leafy vegetables, it’s often considered a healthy Indian dish.

Some traditional recipes do not add any cream to the dish but since we are, remember that while the greens are definitely healthy and full of fiber, this is not a low-fat dish when coconut milk and yogurt are added.

The subtle difference between the two being that palak curry uses only spinach whereas a saag curry can use any leafy green as mentioned above.

So technically, because we’re using spinach in this recipe, it could also be called chicken palak.

Another term you may hear instead of saag is saagwala. If you’re wondering what the difference is between the two, the answer is basically nothing.

Chicken saag and a chicken saagwala curry are the same thing.

Minor differences may exist from cook to cook with these terms but they’re both essentially a spinach curry at the end of the day.

No matter what you choose to call this pureed spinach curry dish with chicken, its vibrant aroma and deep flavors will blow your tastebuds out of the water.

If you’re an Indian food lover, you’ll be amazed at how easy it is to create the same restaurant quality saag at home.

The taste will speak for itself and you’ll be hooked on the first bite!

I'm always looking for new and flavorful dishes and this one is definitely a keeper! So easy to make too!!

This looks fantastic. I always love trying recipes from other cultures, especially when they're so easy!

Surprisingly tasty and delicious!! I love how easy it is to make, too! Thanks for sharing!

What a great recipe. Making restaurant meals at home saves so much money. Not to mention homemade tastes better too.

One of my favorite chicken dishes! I get this all the time when I go to restaurants and I'm so excited to be able to make it at home. The flavors are spot on!