*This post for Instant Pot Coconut Pork is sponsored by the Arthritis Foundation. 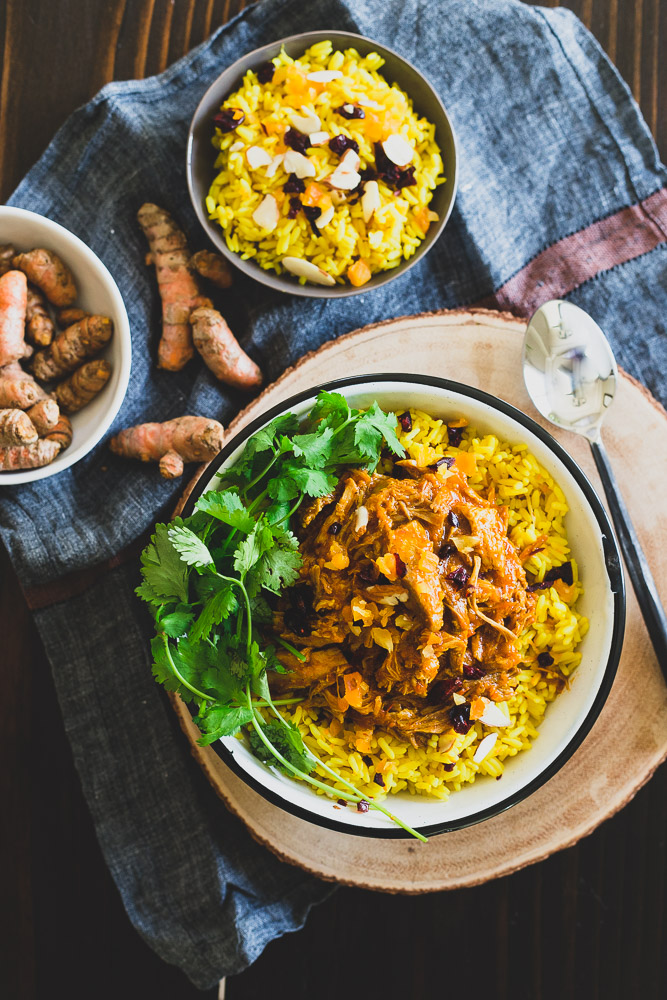 Genetics are a weird thing, aren’t they?

I’m definitely my dad’s daughter. My mom jokes all the time she should’ve named me Angela (his name is Angelo) not Gina.

I look more like him than my mother, my personality is mostly him and when it comes to body shape and health, we’re very much the same.

We actually all got each other those DNA kits for Christmas as a family so it will be interesting to see how the genetics truly played out among us all.

There are many times though I wish I had a little bit more of my mom in me, particularly when it comes to personality.

My dad and I are total hot heads. No matter how much I try to channel my mom in this realm, I’ve pretty much just come to understand I’m not changing at this point in life and I’m doomed to overreact in 90% of situations showing my inner “Angela.”

As I age, however, I’ve found myself thankful for those dad-side genetics in a few ways but most specifically on the health side and with the hope that I won’t have to deal with something that seems to run deep on my mother’s side – arthritis.

Both my mother and grandfather (her father) have auto-immune versions of arthritis.

As a kid, grandpa’s big crooked fingers were funny to me and always just “him”.

As an adult, I’ve come to realize the impact the disease has in not only those outward signs and symptoms but all the medications behind the scenes and the limitations it imposes in his day to day life.

I’ve watched my mom “fall into” arthritis over the years, more specifically the last decade as it reared its ugly head more prominently with age and have seen her go from a healthy middle age, quite active adult to dealing with limitations in what her body can do, managing flare ups under stressful times and basically having to cope with restrictions she never had to worry about before.

And then there’s my husband – a healthy, active and very fit 38 year old who for 12 years had a job that used and abused his hands to no end.

The result? Arthritic nodes on his hands that started at 30 years old and something he’s had to learn to live with and manage ever since.

In working with the Arthritis Foundation, they sent me a pair of simulation gloves. The purpose of the gloves is to illustrate first-hand the impact arthritis has on day-to-day tasks like cooking.

I put the gloves on while prepping this Instant Pot coconut pork and was blown away at how hard detailed tasks like peeling the turmeric and ginger became. Shredding the pork after it had been cooked was another challenge.

The gloves are stiff and bulky making it very hard to manipulate your hands to do what you want them to.

I asked Ulysses (as someone who actually deals with arthritis and these issues) to put them on and tell me how true to life they were almost expecting him not to validate their limited function but his response was that they were actually “pretty spot on”.

He said some mornings, especially in the cold weather for him, it is actually THAT hard to bend his hands and make a fist.

Of course, the gloves can’t simulate the actual pain that comes along with arthritis so imagine that compounding the restricted movement. Just a few minutes of cooking with the gloves made me that much more thankful it’s not a disease I have to deal with right now and hopefully ever.

Some facts on Arthritis

93% of Americans do not know that the leading cause of long-term disability in the U.S. is arthritis. Less than 10% of Americans know that arthritis is the #1 cause of long-term disability. Yet, 8 million working-age adults (18-64) report that their ability to work is limited because of their arthritis, according to the CDC. *(From Harris Poll and Arthritis Foundation Survey Findings)

Although there is no diet cure for arthritis, certain foods have been shown to fight inflammation, strengthen bones and boost the immune system. Adding these foods to your balanced diet may help ease the symptoms of arthritis.

We do our best to eat a healthy, whole-food balanced diet at home but I like to use arthritic friendly spices like fresh garlic, turmeric, ginger and cinnamon as much as I can to help keep Ulysses’ symptoms at bay.

This sheet pan turmeric salmon is a favorite weeknight meal!

This Instant Pot coconut pork (although any pressure cooker will work) with turmeric ginger rice might be one of the most delicious ways I can think of to help combat arthritis through food.

With fresh turmeric (you can read all about the inflammatory fighting properties of turmeric in this turmeric lentil stew), fresh ginger, cinnamon and garlic, this succulent and juicy shredded pork is an arthritis fighting powerhouse.

Looking for a lower-carb rice option that goes well with the coconut pork? Try this curry cauliflower rice instead. It has lots of the same anti-inflammatory spices and big blog Indian/Thai flavors.

The dried fruit and sliced nuts in the rice and the lovely aromatics of this Instant Pot coconut pork almost make it taste a bit Middle Eastern in origin.

Pinpointing a cuisine though isn’t necessary to enjoy this dish. This coconut pork is packed with flavor and whether arthritis is something you have to deal with on a day to day basis or not, there’s no arguing everyone can’t benefit from the delicious immune-boosting spices throughout this recipe.

Prefer beef to pork? Try this slow cooker tri-tip recipe instead using the ingredients from this recipe.

The Arthritis Foundation is leading the fight for the arthritis community, conquering everyday battles through life-changing information and resources, access to optimal care, advancements in science and community connections. The Foundation helps guide families in developing personalized plans for living a full life and making strides towards a cure.

To promote awareness, fund research and ultimately find a cure for arthritis, the Arthritis Foundation launched its first-ever cause campaign – called Let’s Get a Grip on Arthritis.

For the Instant Pot Coconut Pork:

For the Turmeric Ginger Rice:

For the Instant Pot Coconut Pork:

For the Turmeric Ginger Rice:

*Cook time does not include time for Instant Pot to come to or release pressure. Add about 15-20 minutes for that although times will vary.

Hi. How long do you think to cook it using frozen pork?

Hi Annie- I haven't tried this from frozen so I'm not sure. You'll have to experiment but I'd probably do 45 minutes minimum.

First time using my new instant pot, and this was like hitting a home run the first time at bat. I didn't have cardamom so I used some saffron I had sitting around and it didn't seem to hurt.

So glad you liked it!

Delicious! My husband and I loved it!

Thank you so much for this recipe. What a wonderful dish. So much flavor and the right combinations-just perfect! My family devoured it!!

So glad you all liked it!

Cooked this last night, absolutely incredible! You've really outdone yourself with this one, Gina! My wife and I have been following this blog for years, have never felt the need to comment, but this recipe was top 3 all time for us!

So glad you liked it! And happy to have you guys as long time readers :)