This easy vegan cornbread recipe is also gluten-free! It bakes up moist with the perfect textured cornbread bite and just a hint of sweetness so you can enjoy it with a bowl of chili or soup just as much as with a pat of butter by itself!

When I made this brisket chili recently I was craving a piece of cornbread to go with it really badly.

It’s been ages since I made some.

Funny side note – I used to make the Jiffy corn muffins weekly when we were first married! I cringe at the thought of that now.

And while I had old go-to recipes in my back pocket like this vanilla pumpkin cornbread (too sweet for what I was going for) and these pumpkin corn muffins, I realized neither really fit my current dietary needs.

That’s when I set out to make a vegan cornbread that was also gluten-free.

So, the testing for this vegan cornbread recipe was already way easier than others.

What I ended up having to play around with and tweak were the flour ratios, fat (vegan butter vs. oil) and sugar.

If you’re like me, you want cornbread to have a touch of sweetness but not too much, have a textured bite but not too much grit and lastly, a moist center but not to the point where it’s cake-like.

Cornbread is kinda the goldilocks of baking.

I think after a few rounds of testing, this gluten-free and vegan cornbread nails all those things.

HOW TO MAKE VEGAN CORNBREAD

You’ll need the following ingredients for this cornbread recipe:

Preheat the oven to 400°F and grease a baking dish. It should be 8×8 in size or something similar, like the rectangular shaped one I used in these pictures.

Combine the almond milk and apple cider vinegar in a small bowl or measuring cup to create the vegan buttermilk. Let it sit while the rest of the cornbread is prepped.

Combine the cornmeal, gluten-free flour, grits, salt and baking powder in a large bowl and whisk together.

In a separate bowl, whisk together the melted vegan butter and sugar until smooth. Add the the almond milk mixture and whisk again until incorporated.

Pour the wet ingredients into the dry and stir together with a spatula until just combined. Do not over mix the batter.

Transfer to the prepared baking dish. Bake for 25-28 minutes until the edges are pulling away from the dish and start to turn golden brown. A toothpick inserted in the middle of the cornbread should come out clean.

Let cool for 10-15 minutes before slicing.

Gluten-Free Flour Blend – GF flour blends made to mimic baking with regular all-purpose wheat flour can vary from brand to brand. I tested and used the King Arthur measure for measure gluten-free flour in this recipe. For best results, use the same brand. While I’ve used Bob’s Red Mill and others in the past, they do bake differently and I can’t guarantee the same outcome with other gluten-free flours.

Corn Grits – I found adding a small amount of grits in place of cornmeal (which is a finer grind) was the perfect way to get the desired texture. The 1/4 cup of grits in the recipe brings juuuust enough grittiness (pun intended) to each bite without going overboard. Some people add actual corn kernels to their cornbread recipe to achieve this but I prefer mine without and this was the perfect compromise.

Vegan Butter – After testing this vegan cornbread with both a vegan butter and oil, I decided I liked the moisture outcome of the butter best. I used Melt Organics plant butter but also recommend Miyoko’s array of vegan butter options.

Sugar – It’s not often I choose regular old granulated sugar in my baking recipes! But, when it comes to cornbread, it’s what worked best. You can substitute coconut sugar if you prefer but it will change the color and flavor just a bit.

IS THIS A SWEET CORNBREAD RECIPE?

I prefer my cornbread to be more unsweet than sweet. That said, I like it to have some sweetness. With just over 1/4 cup of sugar in the recipe I think the sugar level in this vegan cornbread recipe is just right!

It’s savory enough that it will go incredibly well on the side of soup or chili but it’s also just sweet enough that if you spread some butter and drizzled some honey (not vegan) or maple syrup on top, you’d be set too.

CAN I USE OTHER NON-DAIRY MILKS?

Yes, feel free to substitute another nut milk, soy milk or oat milk in this recipe.

Just make sure whatever milk you choose is unsweetened and unflavored.

This recipe will also work with regular dairy milk if you’re not concerned with keeping it vegan. Follow all other ingredients and steps in the recipe as stated.

WHAT TO SERVE WITH CORNBREAD

You can also serve this cornbread with Instant Pot brisket for a BBQ vibe or even Instant Pot bolognese! I mean, why not? Comfort is comfort, right? I think a southern vegan cornbread and classic Italian dish can go together just fine!

HOW TO STORE VEGAN CORNBREAD

Cornbread is always best eaten fresh within a day or two to maintain its moistness. But, it can be stored in an air-tight container at room temperature for 3-4 days.

I think you’ll have no problem finishing this batch off before that though!

*I used King Arthur gluten free flour measure for measure in this recipe. Not all gluten-free flour blends are the same so for best results use the same brand. 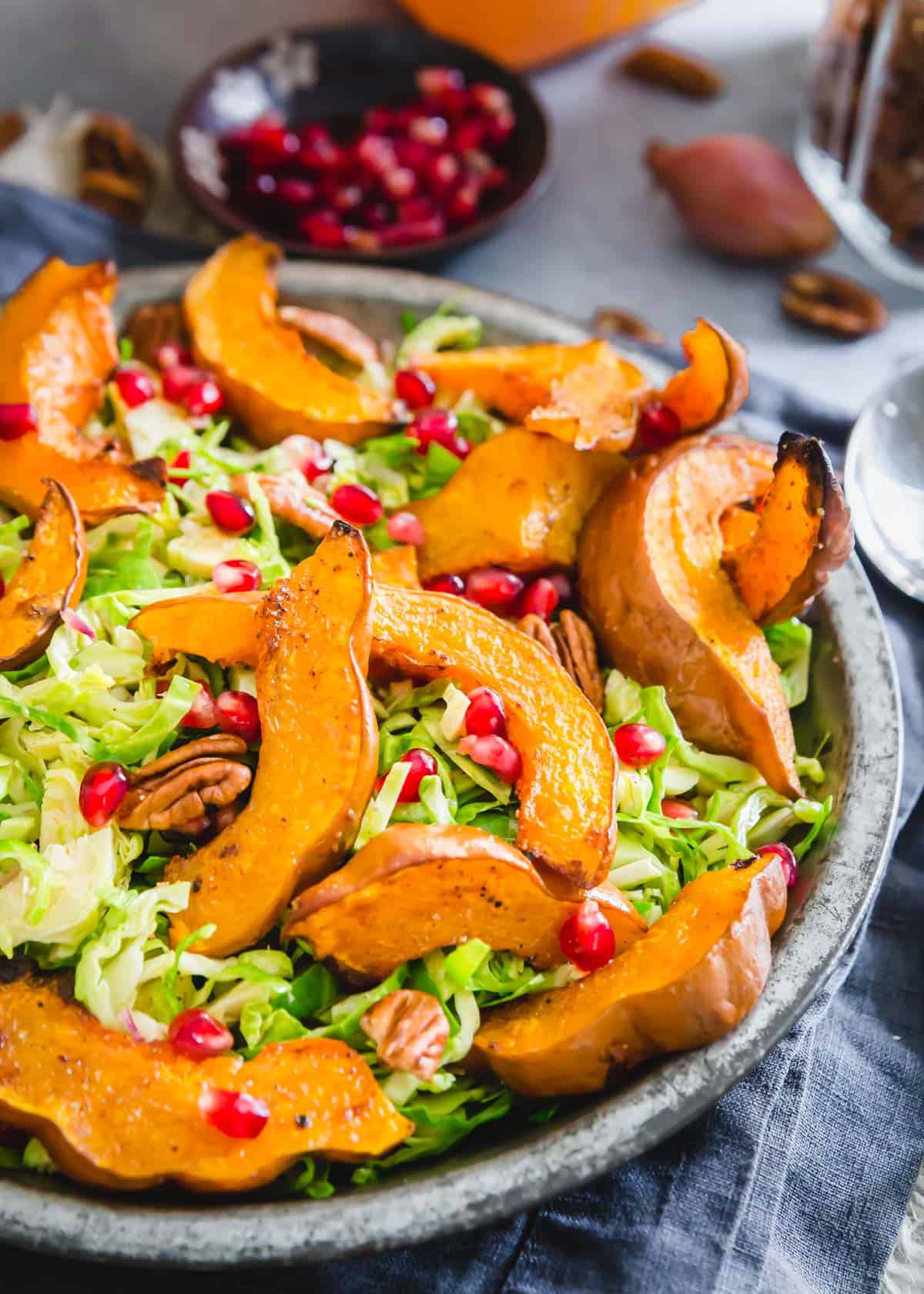 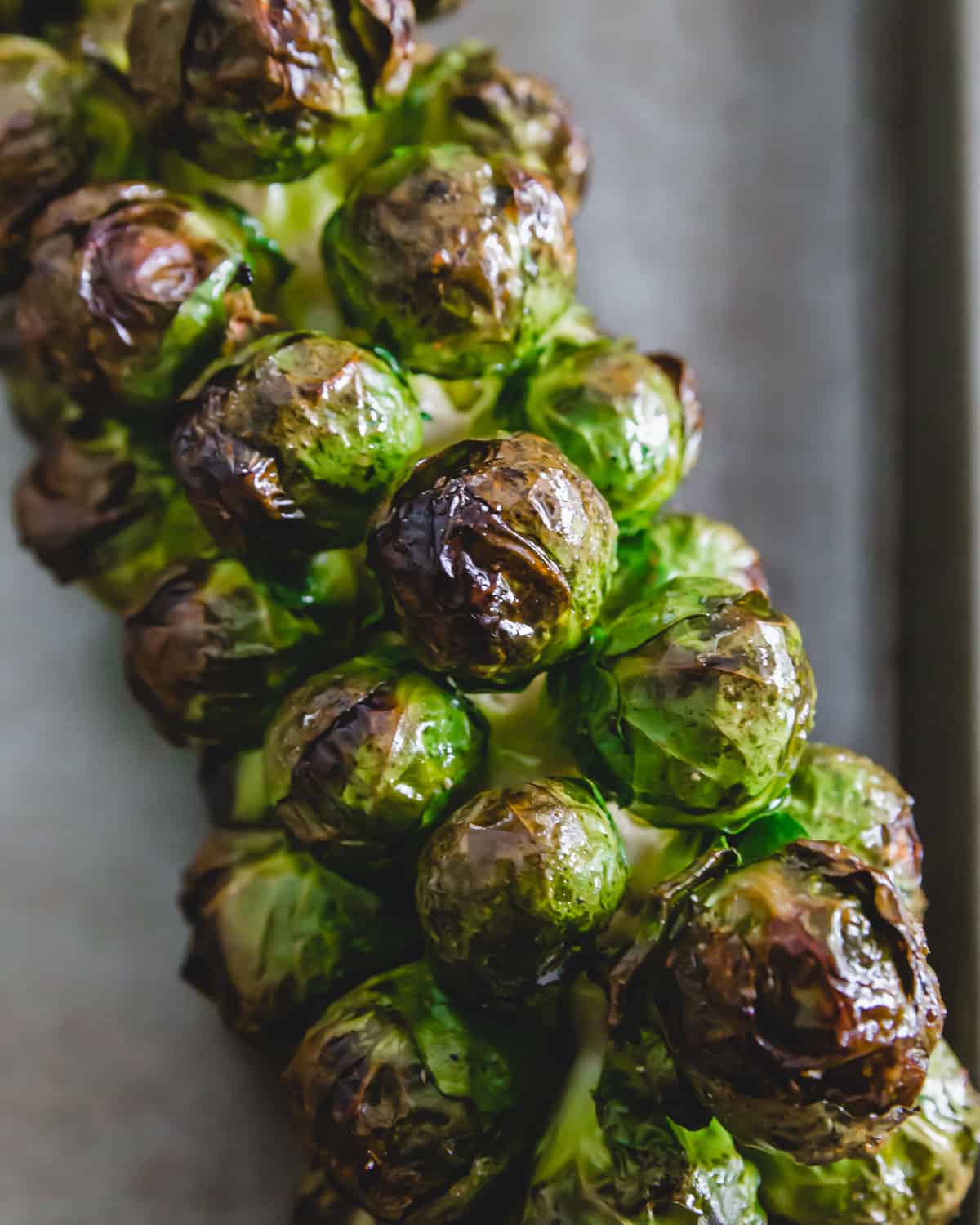 Next
Maple Roasted Brussels Sprouts On The Stalk
Click here to cancel reply.

What a fantastic recipe for vegan cornbread! I'm adding it to my Thanksgiving recipe arsenal right now.

This is absolutely delicious! I love that it’s such a crowd pleaser for the whole family

I grew up eating Jiffy cornbread and I now can't even bring myself to buy a box now that I know what homemade taste like. This is a great recipe to have on hand with the weather getting cooler!

That crumb! we had it with our chili today and it was a hit! everybody loved it.

Cornbread is one of my daughter's favorite for Thanksgiving! So excited to share this recipe with her!