This sriracha honey salmon is cooked on top of a bed of mixed vegetables in a foil packet for a complete meal all in one!

Three weeks ago, after 3 flights and about 17 hours of travel, I arrived in Cordova, Alaska.

When Copper River Salmon initially asked me to come out for a few days, I was beyond excited to not only finally get to experience Alaska but also delve deep into the whole “business” of wild salmon.

From policy set by the state’s Department of Fish and Game that ensures a sustainable fishery now and in the years to come to meeting and eating dinner with some of the fishermen themselves and everything in between, the trip was truly eye-opening.

Wild seafood, particularly salmon, is something I’ve been passionate about for some time.

I can vividly remember driving past fish farms in Greece on my high school graduation trip and the reality of where most seafood I was eating was coming from hitting me smack in the face.

I don’t know about you, but fish that have absolutely no room to swim without being on top of each other and pretty much living in their own shit being fed god knows what is no different than the cooped up chickens or feed lot cows we’ve all gotten so passionate about not eating as of late.

That’s not the kind of protein I want to put in my body or feed anyone I know and love and so I’ll happily be that person in a restaurant who asks “is the salmon farmed or wild?”.

The great thing is, the answer to that question in my area is more and more becoming “wild” and it’s not only evident in restaurants, it’s starting to happen in the grocery store too.

I was psyched to find Copper River sockeye in my local store for this sriracha honey salmon recipe!

And not only am I seeing wild varieties of the fresh fish but also some great wild choices for smoked salmon too which is a great choice when making this smoked salmon BLT.

Of course, I’d heard of Wild Alaskan King Salmon before but it wasn’t until being immersed in the food blog world in the past couple of years that Copper River Salmon became something familiar to my ears.

I knew it was wild salmon from a certain area in Alaska and I knew it came with a decent price tag when my local store had it in season but other than that, I got off the plane in Cordova not knowing much about this superfood that supports an entire town in some way or another.

During our 5 days in town (with Ayla, Michelle and Savannah) we did everything from visit a glacier, talk on the radio, judge a local food contest, hike, run a road race, fish, explore Orca Bay on a local fisherman’s bowpicker, watch salmon spawning upstream, dine with fishermen, see more bald eagles than I could count, filet, cook and eat a sockeye salmon caught that morning, visit a sonar fish counting station and learn how a tiny salmon otolith (ear bone) can determine where a fish a came from.

I wore a hat and gloves in July, saw fish heads left on hiking trails by bears, experienced complete brightness at midnight and went without cell phone service for the longest stretch of time since probably 1998…it was everything I imagined Alaska would be and more.

Cordova is a small town of about 3,500 in season. It’s accessible only by boat or plane and if you live there, you either somehow work in the fishing industry (which is mostly salmon but also some halibut) or you support it in some other way.

I’ll fully admit that I had no idea what the life of a fisherman was actually like before this trip unless you count the reality tv biased view of The Deadliest Catch (which, btw, The Northwestern was actually in Cordova while we were there).

It’s also not a cheap gig to get into.

Permits alone (if you can get one because there are a limited amount to keep the sustainability of the salmon in check) can run fishermen $230K+.

That doesn’t include the cost of their boat or any other expenses.

Most fishermen live outside of Cordova and leave their families for weeks to months at a time to make a living.

The whole salmon fishing process is dictated by The Alaska Department of Fish and Game.

Their first and foremost priority is to maintain the sustainability of the salmon. Supporting Alaskan livelihood comes second.

One of the ways they do that at the Copper River is by maintaining a sonar station right near Child’s Glacier where 3 full time employees literally count by hand (<–that blew my mind) thousands of fish swimming upstream during the different runs (different salmon species run upstream to spawn at different times of the season).

The “escapement” information gathered by the sonar station helps Fish and Game make decisions as to when to allow fishing and for how long.

When fishermen get the ok, they head out to fish and catch the salmon before they enter the streams to spawn.

In case you’ve never watched a National Geographic documentary, when salmon head back into fresh water to swim upstream and reproduce, they stop eating, their bodies start deteriorating and they have one mission…SEX.

You don’t eat them at this point in their life because their bodies go through this sort of metamorphosis and the meat just isn’t good any longer.

Fishermen catch salmon out in the open salt water before they reproduce when they’re fattening up for their journey upstream.

King salmon have always been considered “the best” because of their distinctly higher fat content than other salmon.

Reason for that being that they travel much further upstream to spawn than the others and need a higher fat reserve to do so since they stop eating at that point.

I used to think I liked King salmon the best but after this trip I’m a pretty big fan of sockeye (seen spawning below at Power Creek). They turn a beautiful red when spawning and their flesh is also naturally much more red than other salmon species.

Fun fact: salmon go back to the same spot to spawn as they were born.

Once the fish have been caught, they’re bled (a process that greatly helps extend the freshness of the fish) and either put on ice or a cold salty slurry of sorts.

At this point, most fishermen sell their fish to what’s called a tender boat.

These are boats that go out to the fishermen, pay them for their fish and transport the fish to the processing plant.

This helps the fishermen stay out on the water and make the most of their allotted fishing time rather than running fish back and forth to land.

The processing plants are like any other industry, fish are sorted by type (King, Sockeye, Coho, Pink, Chum), gutted and then depending on where they’re going/what they’re being used for, filleted, frozen or canned and shipped all around the country.

After having dinner, drinking beer and even running a 5k with some of the local fishermen, getting to know them, their families and their businesses, I can say that $28/lb price tag for Copper River Salmon in my local store doesn’t sting nearly as much.

You get what you pay for and this trip opened my eyes to the quality and pride that goes into each and every wild salmon.

It also made me enjoy each forkful of these easy sriracha honey salmon vegetable packets just a little bit more than usual.

Places to eat in Cordova, Alaska:

Harborside Pizza – small world, the owner grew up in the town next to mine in NY. He knows good pizza. Probably my favorite two meals of the trip. Also some pretty amazing hand churned ice cream using wild local ingredients like strawberries.

Reluctant Fisherman – one of the main restaurants in town and great live music on certain nights.

Orca Adventure Lodge – this is actually where we stayed and you’d never in a million years know the food is as amazing as it is by the looks (old cannery they turned into a “hotel”) but the breakfasts and dinners we ate here were amazing. Things like reindeer sausage, 24-hour braised brisket, tart cherry pumpkin pancakes and more appeared on the menu.

Use their site locator to find it near you or you can also buy directly from one of the fishermen we met through his family’s site and business, SenaSea Seafoods.

A BIG thank you to Copper River Salmon Marketing Association for inviting me out and to each and everyone involved in making our trip as wonderful as it was.

*Copper River Salmon paid for my trip and accommodations. 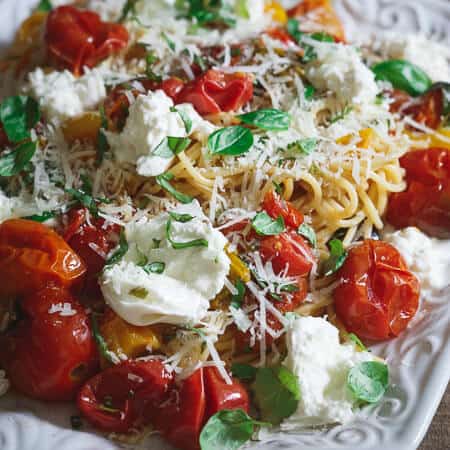 Next
Pasta Checca with Burrata
Click here to cancel reply.

This was the best thing I have made in a while. Thank you!

Love! Adding this to my dinner plans this week!

That salmon looks to die for!

Incredible! The salmon has such vibrant color!