AS AN AMAZON ASSOCIATE I EARN FROM QUALIFYING PURCHASES
21 shares

These paleo blueberry chocolate macaroons are bursting with sweet wild blueberries and dipped in creamy dark chocolate. They make for an easy, no fuss paleo dessert!

Let’s discuss the difference between macaroons and macarons. Macaroons, like these, are a basically a bunch of coconut held together by egg whites. Sometimes dipped in chocolate and adorned with cutesy little chopped nuts, ginger (like these dark chocolate orange dipped macaroons), or whatever else you want to sprinkle on that chocolate while it sets. 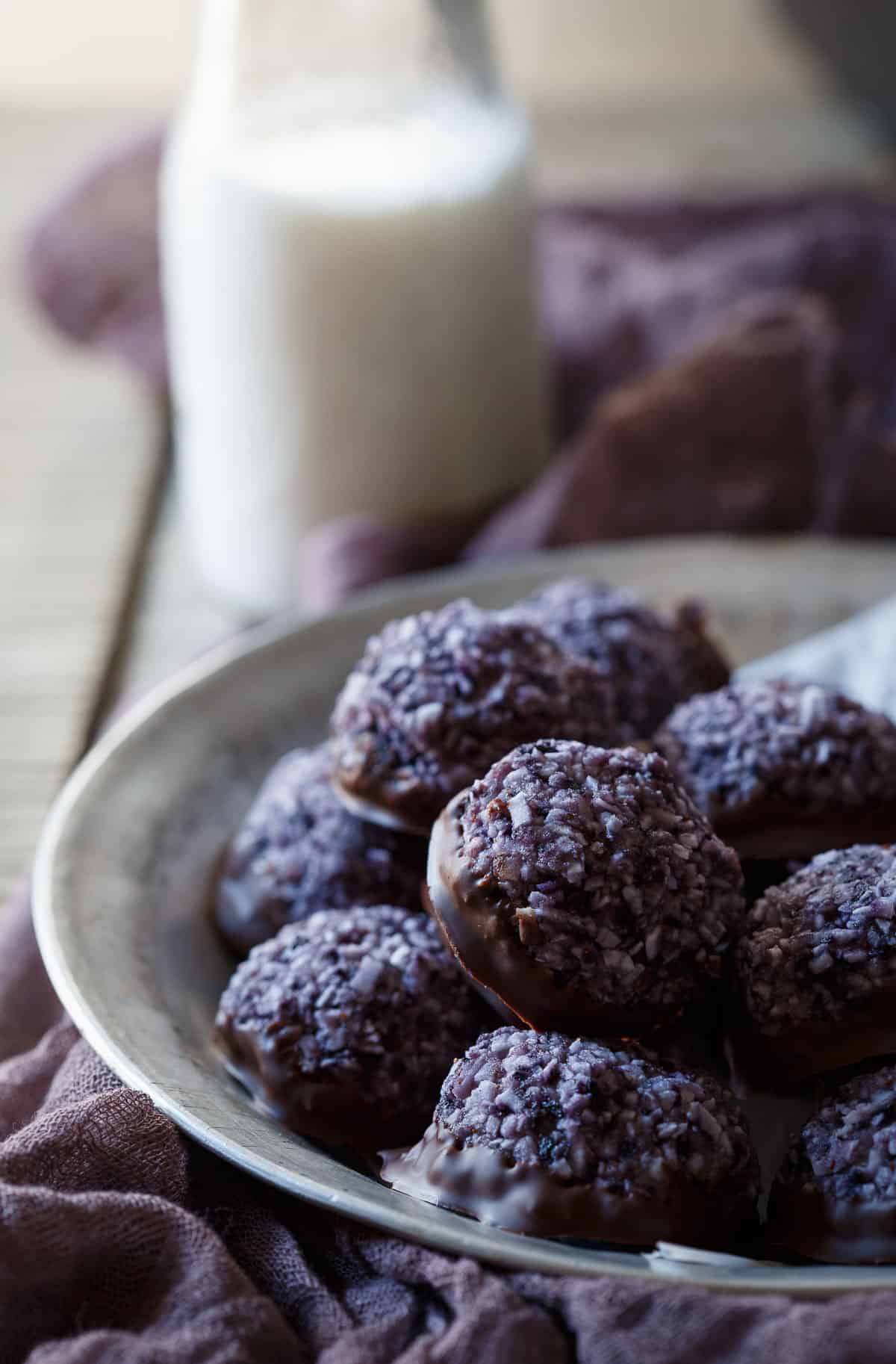 Macarons, on the other hand, are a really impossible to pronounce (when you never took a day of French in your life), temperamental and fragile French sandwich cookie of sorts.

They involve precise measurements, perfectly beaten egg whites and a lot of staring at the oven praying they’ll bake up and grow their trademark “feet”.

They line bakery shop store front windows in their pretty pastel colors, but don’t let that cutesy appearance fool you, they can throw even an experienced home baker into a fit of rage when sheet after sheet come out hollow, cracked, footless or just flat. 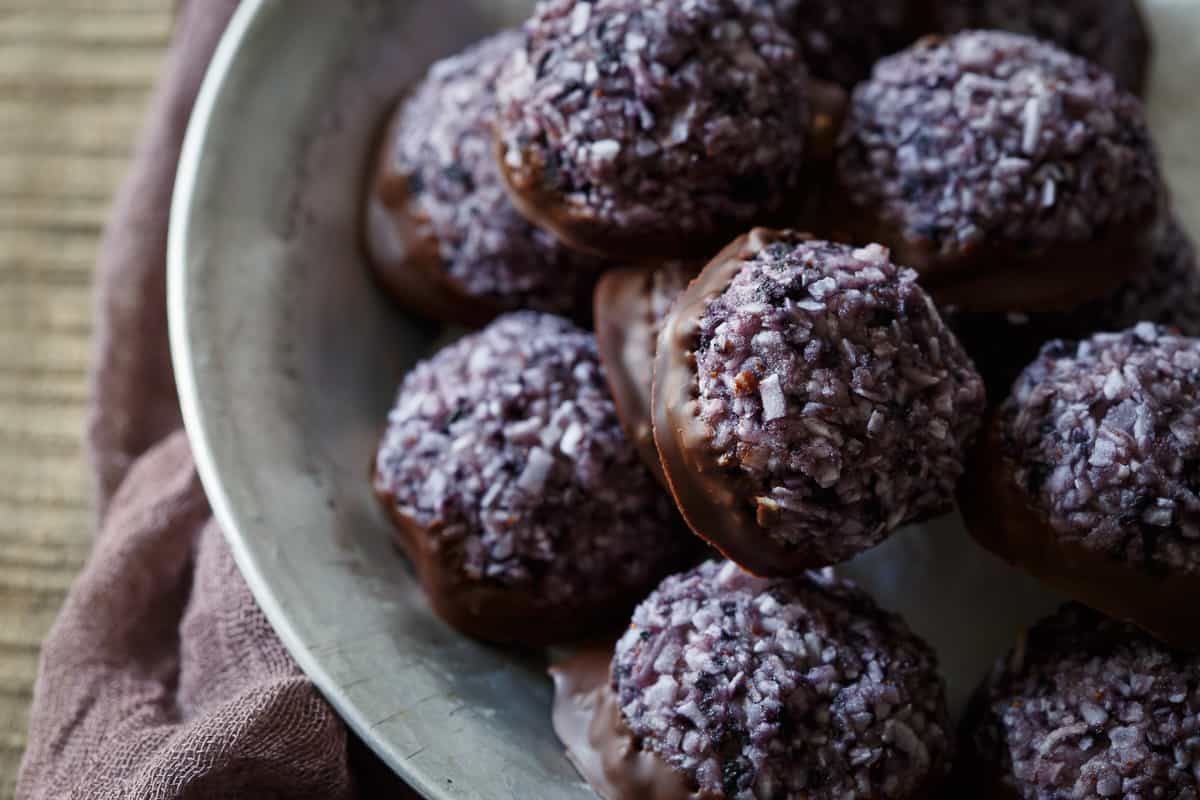 I may or may not have had some experience with that (how not to make macarons).

Almost three years later, I can finally see the comedy in that post.

At the time, I wanted to scream, cry and punch the French person who first created them square in the face. 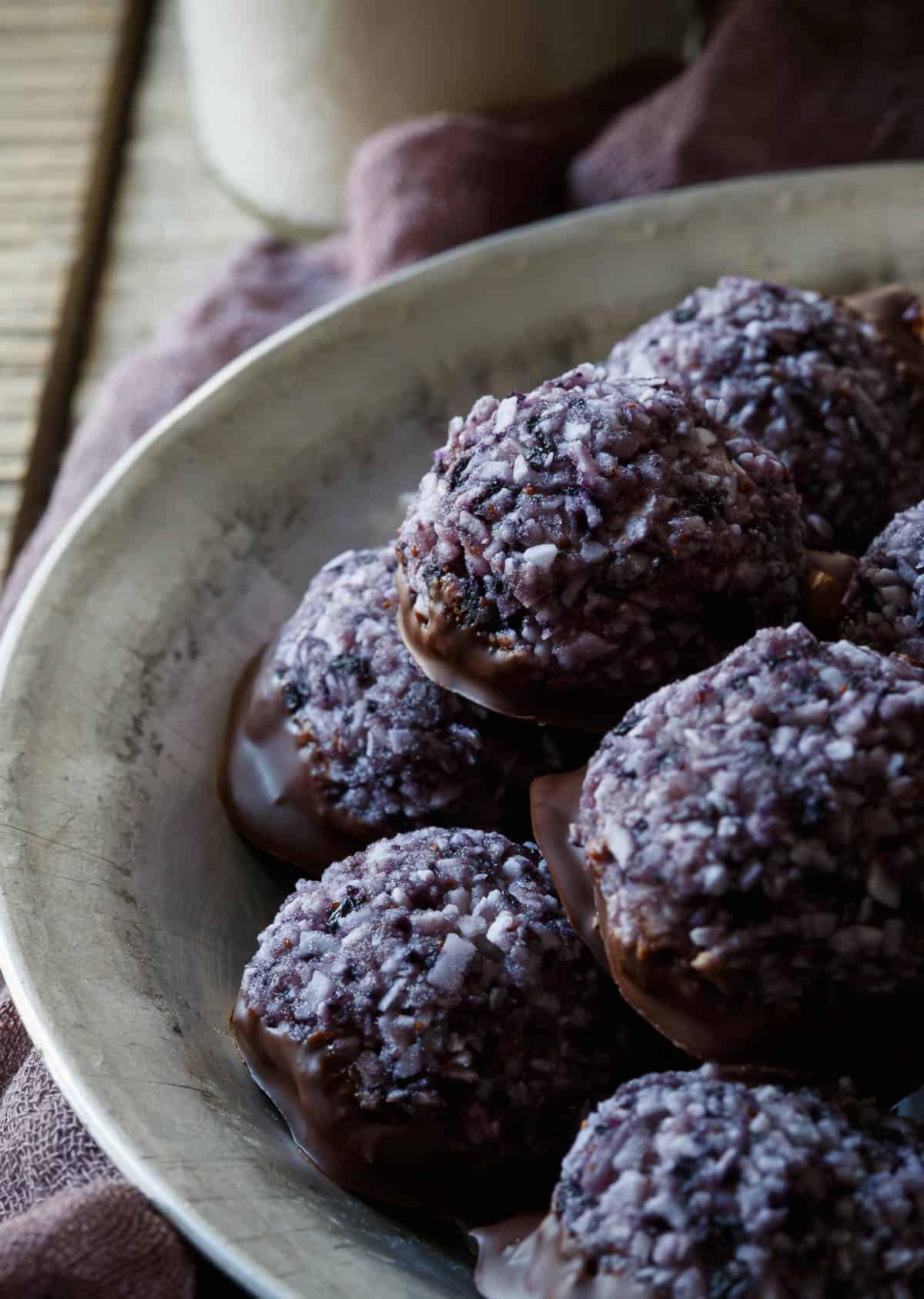 Since that poignant April day, I’ve stuck to the former, macaroons. They’re the kind of cookie that never gives you problems.

There’s no nerve wracking oven-staring necessary, and unlike macarons, they’re actually very easily adaptable to a paleo friendly diet. Try to substitute maple syrup for sugar in a macaron and your world will likely fall apart. The same substitution in macaroons, however, is a simple swap. They’re a chill cookie and when it comes to baking, I’m all about that.

These paleo macaroons are filled with wild blueberries that not only give them a really awesomely funky color but a bit of a superfood health boost too so you can now justify eating half the batch yourself. #doingitformyhealth Duh

Check out this paleo blueberry chocolate macaroon recipe over on Food Fanatic too!

I found that I had to cook these much longer than the recipe says. Also the first batch I used my silpat and they stuck & fell apart. The 2nd batch I used parchment and they didn't stick but still fell apart. I was not able to dip them in chocolate as they fell apart into the chocolate. I ended up gently lifting them up and dripping chocolate on the bottoms. They taste fine but I would not make these again. Followed recipe to a T and did not substitute anything!

Love this combo! I never met a macaron I didn't like.... pinning for later!

These macaroons look awesomely yummy! I will try this at home and hopefully, I can make it correctly.

Macarons are also not something you should attempt when you live in Central FL. There's like a 2-month window here when the humidity level is sufficiently low for macaron success. Luckily, macaroons work in all climates, and I will be happy to try this recipe out!