Home » Recipes » Dessert » How NOT To Make Macarons

How not to make macarons: an outline of 3 different methods for making macarons and their results.

The first macaron I ate was about 2 years ago at Le Panier in Pike Place. Somehow, I had avoided ever tasting one up until then. I had just started blogging and funny enough when I sat down with my latte and macaron on the one open stool in the packed bakery, I noticed 2 girls obsessively taking pictures of their individual macarons with crazy big lens outfitted cameras. At the time I was still using my 5 year old point and shoot and had no idea what could be so interesting about a baked good to spend 15 minutes taking pictures of it instead of shoving it in their mouths instead. As I was leaving, I overheard a sentence of their conversation and the word “blog” and put it all together. Fast forward 2 years and I’d probably fit right in with them at that table now. Although, I would order multiple macarons so I could shove one in my face before taking pictures. Priorities.

Since then, they’ve been unavoidable when you follow far too many food blogs than should be admitted and the thought of attempting to make them myself has slowly grown on me as one of those “must dos” when your life sort of revolves around food. When Lindsay announced this month’s kitchen challenge I took it as a sign and convinced myself this needed to happen.

I’m not a baker. I don’t own a kitchen scale (and refuse to buy one for the sole purpose of weighing macaron ingredients). And my pastry bag & tips consist of a ziplock bag with the tip snipped off. 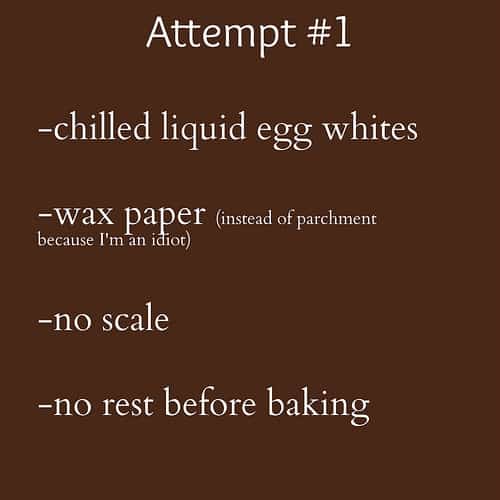 I followed a recipe I found online from a trusted source exactly. Stella kinda knows her stuff so I figured I might be able to swing these fickle little things after all. I watched the videos that Mardi made based on Stella’s recipe about 3 times before starting and I’ll admit, I was feeling a bit confident in myself.

That feeling lasted up until about minute 6 of beating the egg whites.

Mardi claims that she’s used chilled liquid egg whites with no problem in this recipe and since I’m a cheapo that didn’t want to waste half my organic eggs by using them (because let’s be real, what the hell do you do with the yolks when custard isn’t really something you want to take on that day?), I went that route straight out of the gates. Except by minute 6 when they were barely even foaming as the mixer beat away at them I had a feeling I was already in trouble.

At minute 12 when they looked like nothing more than bubbly egg whites, I had resigned to failure and went upstairs to put store appropriate clothing on so I could run out for more powdered sugar, food dye and eggs for batch #2. I happened to leave the mixer running though and when I came back downstairs at minute 22ish, they actually happened to look somewhat fluffy and whipped. So I threw my bag down on the chair, flipped the speed to 10 on the Kitchen Aid and whipped the shit out of them for another 2 minutes. I figured it was a 50/50 shot at this point and just went with it.

Folding in the dry ingredients actually went much more according to plan than I thought it would and when I put them in the oven (on wax paper instead of parchment by accident) I had hope.

I sat in front of the oven door, praying for those little suckers to puff up and grow feet like an absolute idiot who was literally talking to them at one point.

18 minutes later and this is what I had. 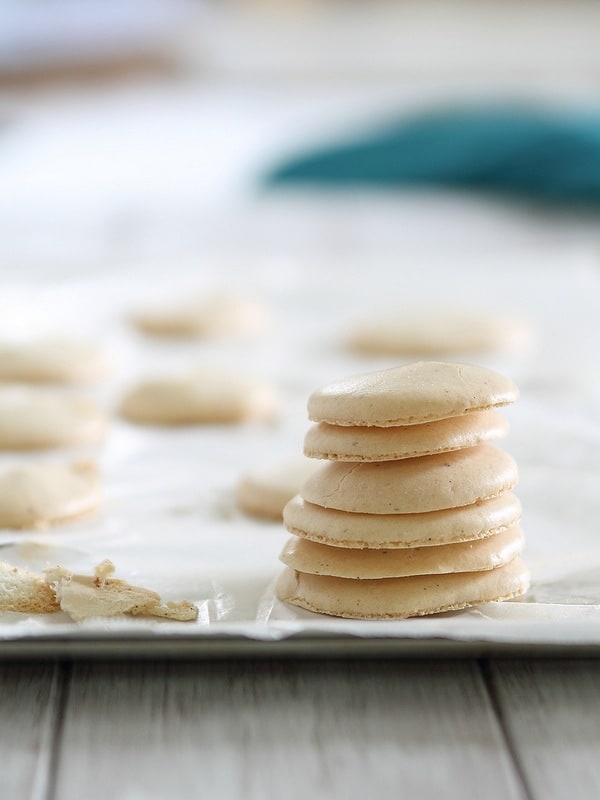 Tiny little feet but almost flat as a pancake. When you bit into them there was hardly any of that chewy middle underneath the eggshell-esque outside.

Oh, and then there was that whole wax paper thing. 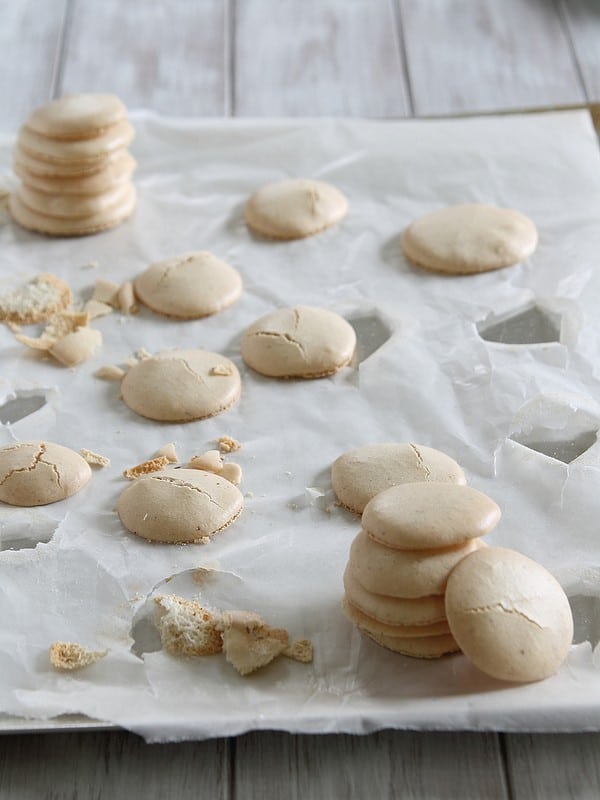 It’s not non-stick, in case you were wondering.

A mid-day 12 mile bike ride ensued to clear my head a bit and then to the store I went to restock and reattempt. 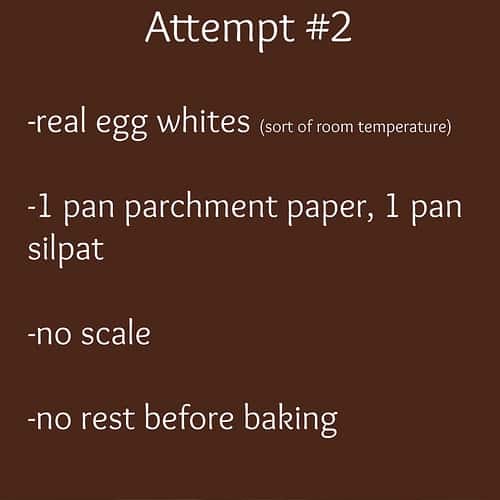 Things were looking good with this batch. When my egg whites looked like this after the 10 minutes or so of whipping, I was thinking “yep, this is the batch”. 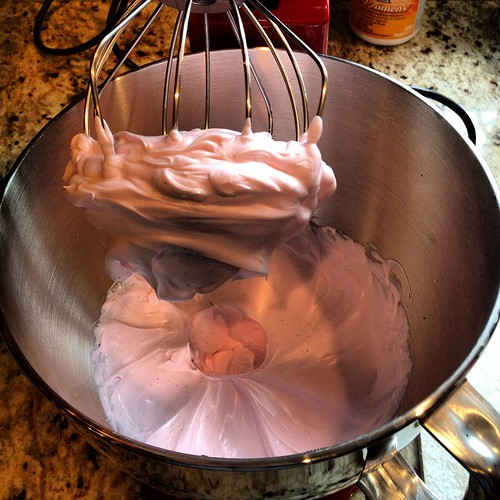 I piped them out, stuck ‘em in the oven and was confident those little feet would appear and I’d have conquered the art of macaron making.

Except, that didn’t happen. 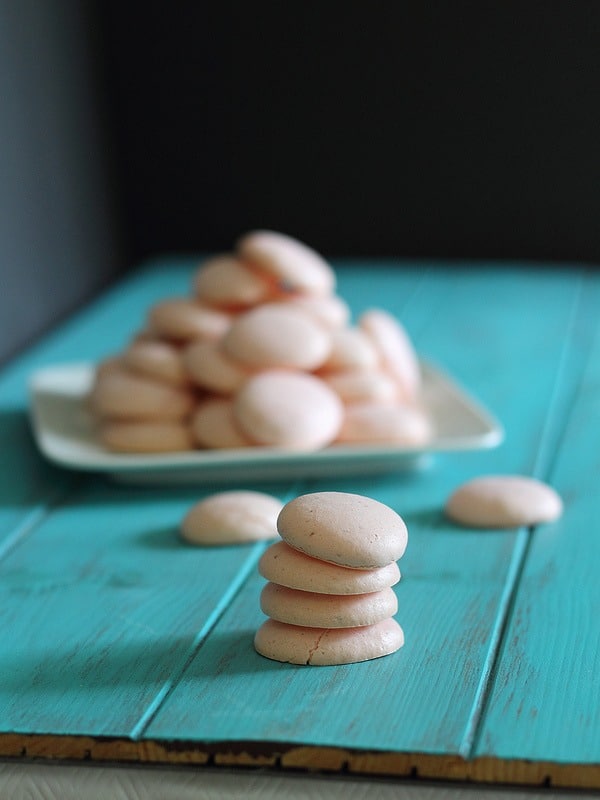 I got good “puffage” except not even a freakin’ toe, let alone feet. 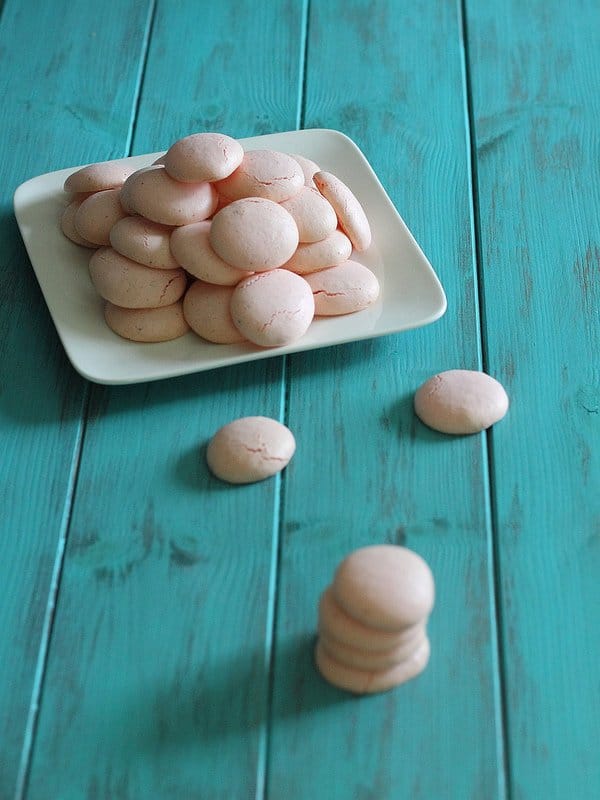 These tasted great though. Good texture inside & out and the silpat vs. the parchment didn’t seem to make a difference either way.

I had a bit of batter left in the bag at this point though so I marched on to attempt #3. After googling things like “why won’t my macarons grow feet”, it seemed like people swore by letting the batter rest after piping before going into the oven (even though Stella said this doesn’t matter). Something about it drying it out and a whole bunch of other baking terms I won’t pretend to understand but figured I’d attempt it as a last ditch effort.

So I sat impatiently, uploading my failures to instagram for the next hour and waited while they “dried”. 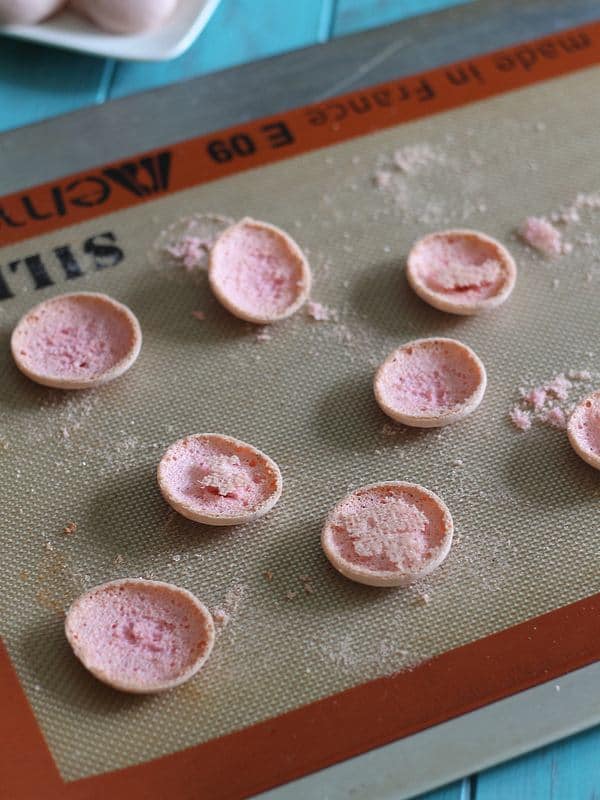 Probably the worst batch of the day. Completely hollow underneath, no chew factor and obviously no feet considering they more closely resembled amputees from the waist down.

At this point I gave up, showered and got ready for a birthday dinner where I shoved a bacon manhattan and 1lb. of king crab legs down my throat to forget about these bastards of a pastry and the frustrating day.

I will conquer these suckers eventually though. I get obsessive about stuff like this and can’t end on failure. I’m pretty sure success is going to require a kitchen scale and an oven thermometer though so I gotta work on that first.

If nothing else, Ginger enjoyed a few extra snacks for the day and it was a good excuse to play around with a new lens & tripod. I’m in love with the tripod, not so sure about the lens yet.

Got any macaron tips? Wow! After reading all of these I guess I am very fortunate. So far I've baked them many times at macaron no-no conditions~

Oddly, I actually found that the above conditions actually increase my success chances... Especially, humidity, no rest, and not warming up the oven. I find my self plonking ice cubes into the oven after each batch to cool it down faster. Though, I do tend to turn off the top heat after the feet forms. Cause my oven tends to have bad heat fluctuations so the tops would burn if I leave the top heat on till they are cooked through.

Personally, I prefer the French method of making them. As the Italian method tends to cause peaks(, burst piping bags, and hand aches), due to the batter being too thick. As to the meringue not fluffing enough just be sure to wash the bowl clean esp if you do a second batch. The almond ground tends to make it super oily. Giving it (the empty bowl not the egg whites) a swirl of hot water helps remove the grease. If you use the french method and want the meringue to be stiffer, hand whip it (the bubbles will come out finer that way hence the stiffness). It really doesn't take that long.

I am so with you and your frustrations. After two classes (one at a cooking school in France) I am still miserabling failing at home. My family is threating an intervention as I am determined to succeed. Everyday I try another batch, this week however it is my merinque that won't stilffen.Bah! I will get this one of these days! Interesting informations about eggs, not the aging part but some eggs just arent meant to be whipped! Thinking I have just purchased two dozen of such eggs lol. Cheers

We confess: Our biggest food fails, ever! | Makeup and Health

Thanks for the good laugh :D I'm going to attempt making these for Valentine's Day. Good luck on your future macarons, but at least your second try was pretty good!

At least you baked them I made 6 batters before I even tried to bake them! The ting is you just have to use a food processeser! Believe me it is magic when I comes to macaroons!