Internet, meet Holly our rambunctious, insane, sweet as can be, smart and psycho 7-month old Weimaraner. If you’ve ever encountered the breed, those adjectives will ring very true.

I know I’ve talked about her a bit here and there (most likely complaining about my lack of sleep thanks to her 6am wake-up calls) but if you don’t follow me on Instagram, then you probably haven’t seen a picture of her yet. I’ve yet to change my About page to include her (it’s still too hard to take down those pictures of our sweet Ginger). 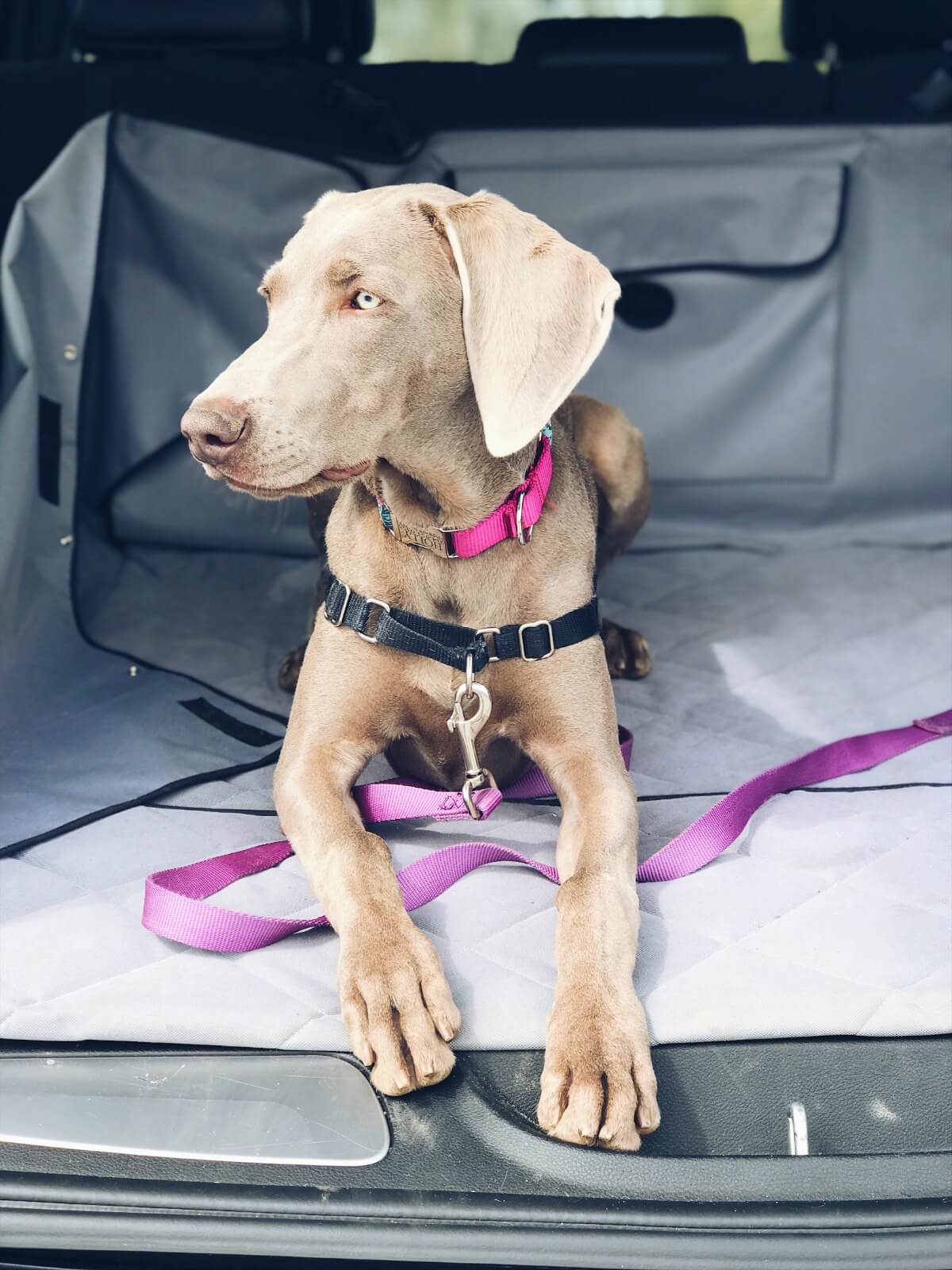 To say Holly is a handful would be the understatement of the year.

When it’s been 11 years since you’ve gone through puppy-hood, it’s a rude awakening.

That’s a true statement with any puppy but when you’re dealing with a seriously active, energy-filled Weimaraner in the dead of winter in New York, even more so.

Last time we went through this stage we lived in Palm Beach, Florida where we could be outside on walks, at the dog park or in our boat storage lot throwing balls back and forth for her to chase at midnight (true story – we did that with Ginger pretty much every night before bed) in flip flops.

When you have to throw on your down coat, snow boots, gloves and hat in addition to grabbing a flashlight and leashing up the dog every 1-2 hours while house-training you pretty much live on the brink of losing your mind every single day.

That was me this past December through March. 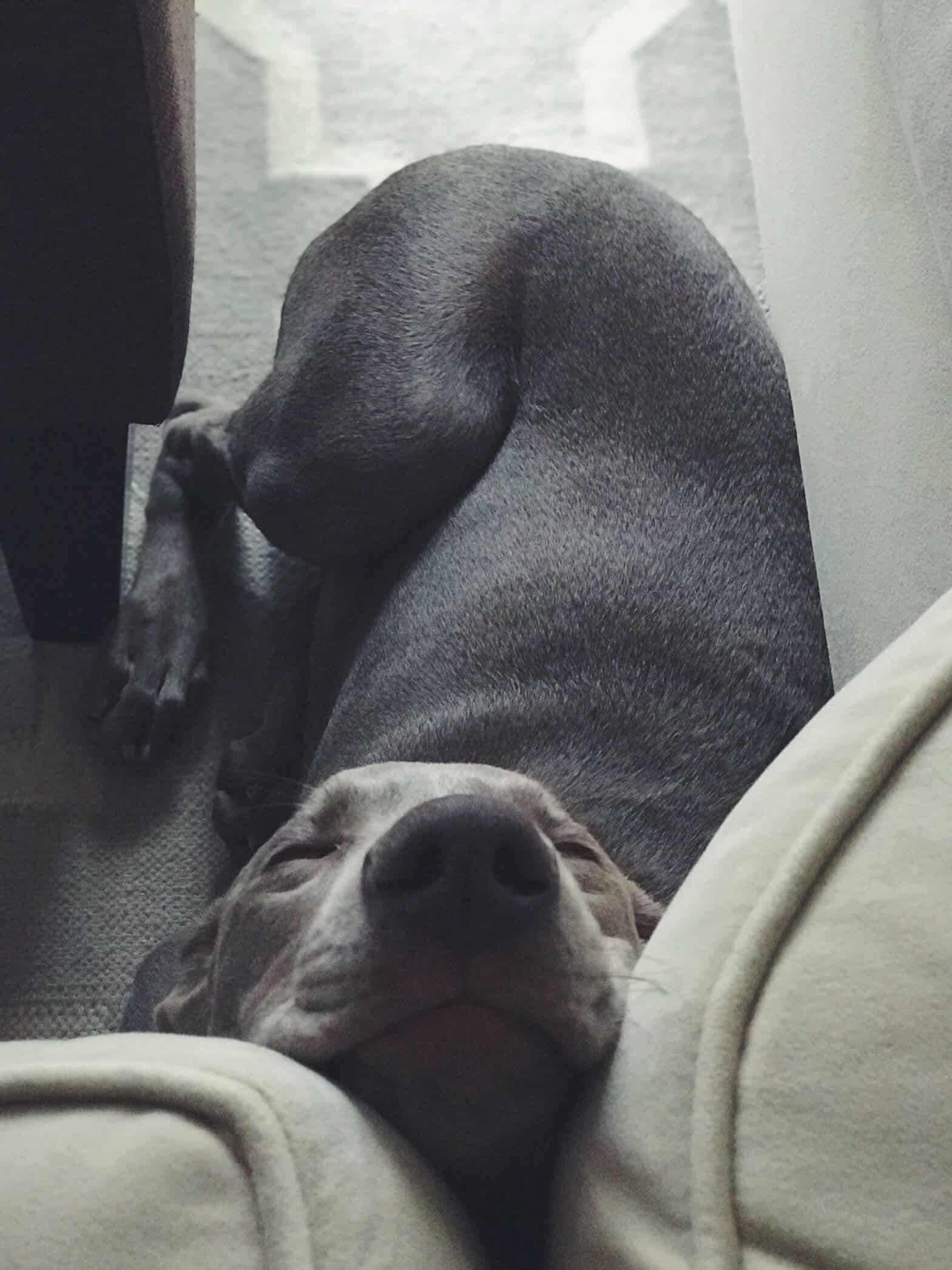 Holly sort of serendipitously fell into our lap at the end of December.

We weren’t planning on getting a puppy so soon after Ginger died and certainly not before being able to fence in our yard but a bunch of things aligned and on December 19th I found myself driving home from Rhode Island with this 13 week old cutie snuggled up against her fluffy white bear that was bigger than her in a crate in my backseat whimpering here and there all the way home for 3 hours.

And so began the countdown until spring.

The countdown until I could simply open the sliding back door and let her out into our FENCED IN backyard instead of going through the whole production of suiting up for the elements, standing out in the cold while she picked up every stick in sight instead of doing her thing, stripping it all off to come inside and cleaning up wet, muddy floors only to have to do it all over again in approximately 1.5 hours so I wouldn’t find myself cleaning up pee on one of the many area rugs downstairs (note to self – remove all rugs for next puppy, if there’s ever a “next puppy”).

New York decided to be completely uncooperative though and throw 3 major snowstorms our way in March instead of letting spring roll in.

With every snowflake that fell, the fence got further and further away and I won’t lie, I teetered between full out bawling and going completely psycho on everyone around me. 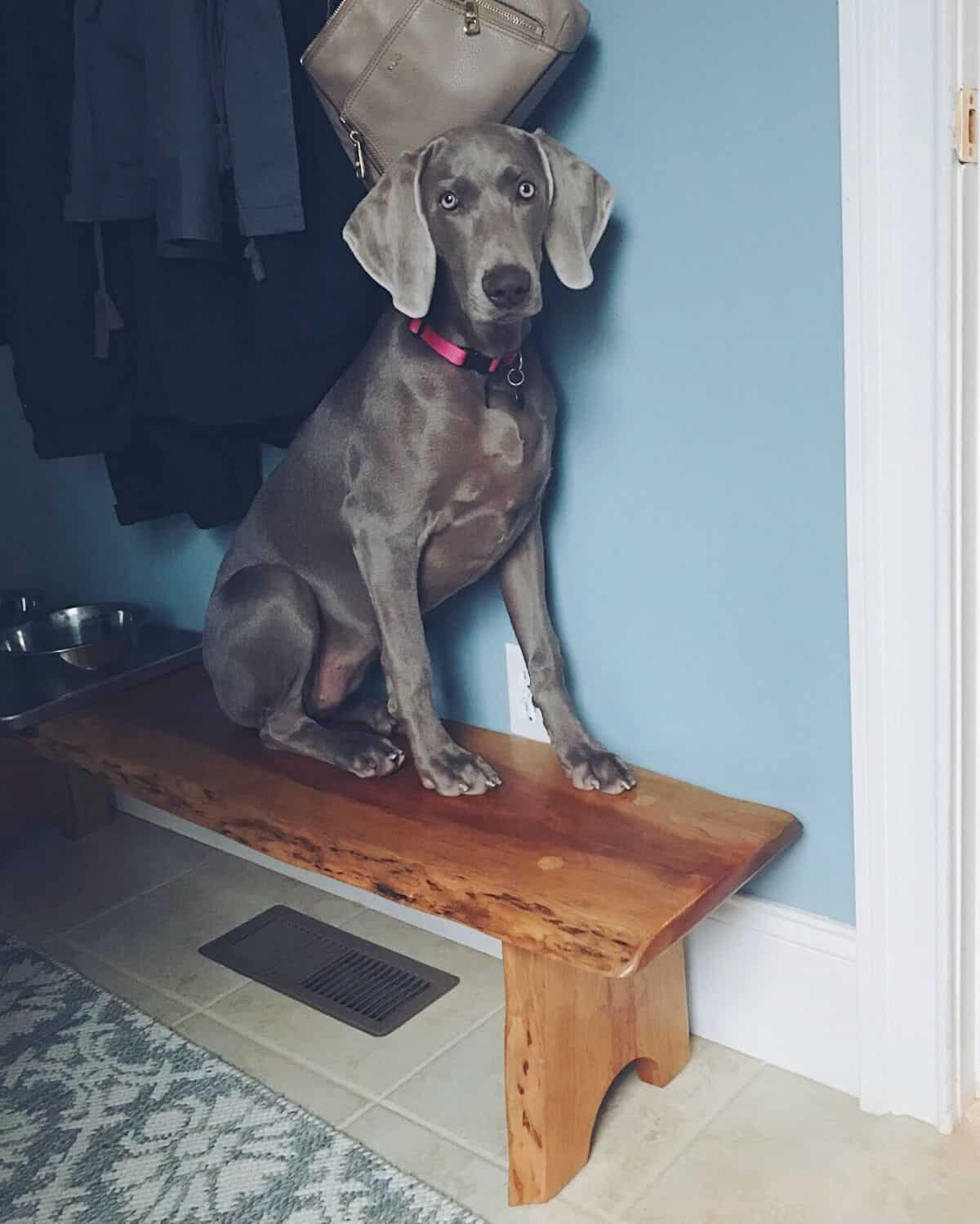 As someone who has (self-diagnosed) seasonal affective disorder, this seriously gave my sanity a run for its money.

But, we persevered and in the frigid end of March temps with spots of snow still on the ground, Ulysses, my brother and I got that fence up over the course of a long weekend and somehow avoided frostbite in the process.

Here’s what Holly thinks of her backyard now:

With the newfound security and freedom of the backyard has come the opportunity for off-leash training.

I’m not gonna pretend to take any credit here, I have the patience of a 1 year old when it comes to dog training. That’s all Ulysses.

My job is to supply the incentive: treats! 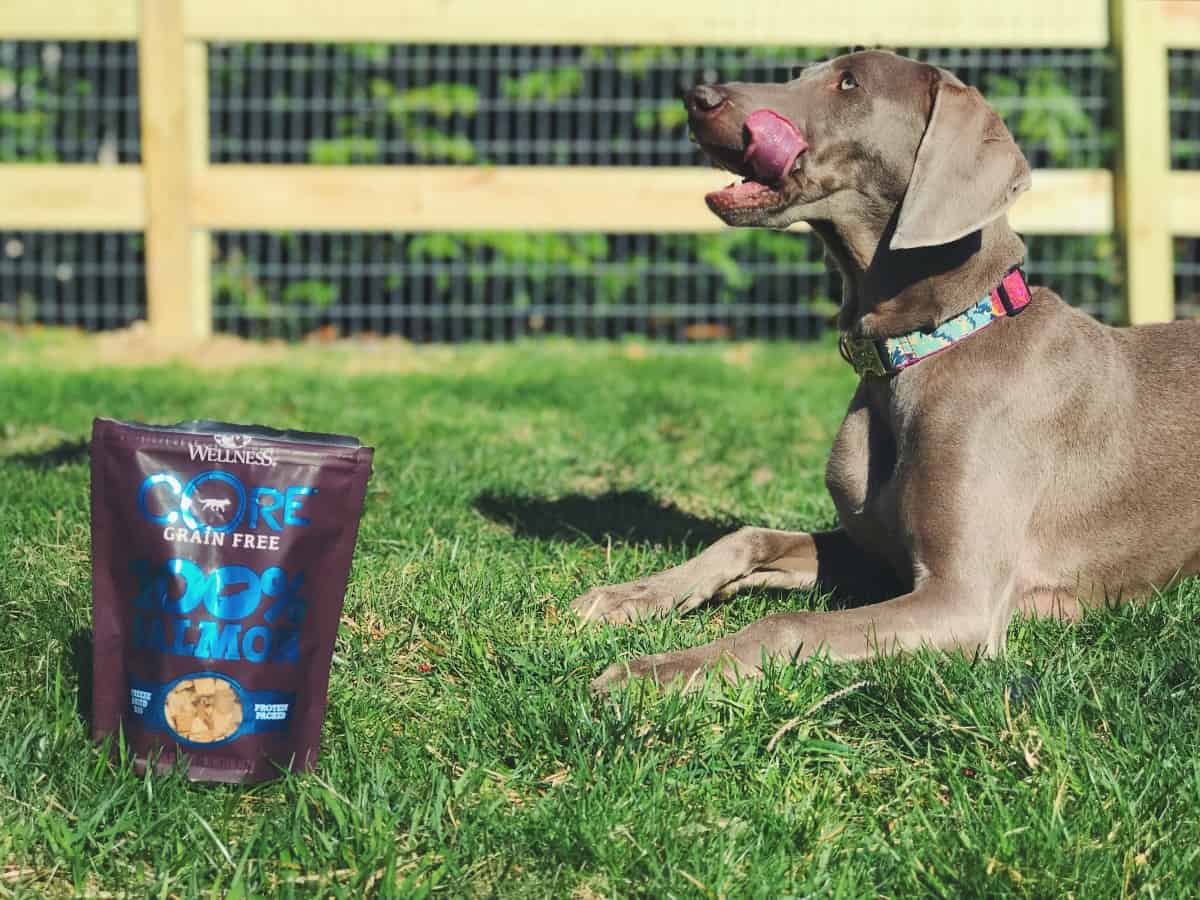 Blame it on being naive and just 25 when we got Ginger, but it took me a while to truly care or even consider the quality of both the food and treats we fed our dog. We brought her home and for a couple of years just fed her what the breeder was feeding her.

Treats were whatever looked good at the pet store or were on sale and that was that.

It wasn’t until my own food awakening a few years later that I started researching better nutrition for her, first exploring grain-free options, then investigating and playing around with raw dog food before finding a happy medium of what worked best for our lifestyle and budget while being the best quality for her.

This time around with Holly, I was much more prepared from the get go. Not to mention, the availability and popularity of quality, limited ingredient dog food and treats really seems to have skyrocketed in the last decade, a great bonus from the consumer standpoint.

Wellness was a brand I already had in our “treat closet” because their CORE RawRev 100% Freeze Dried treats are not only the perfect training incentive with their bite sized pieces but their ingredients are simple: just meat. A simple, clean ingredient list is top priority for my own food and it’s no different for my dog’s food.

When I saw them stocked in the treat jar at our vet’s office too on her first visit, I knew I had made a good choice. 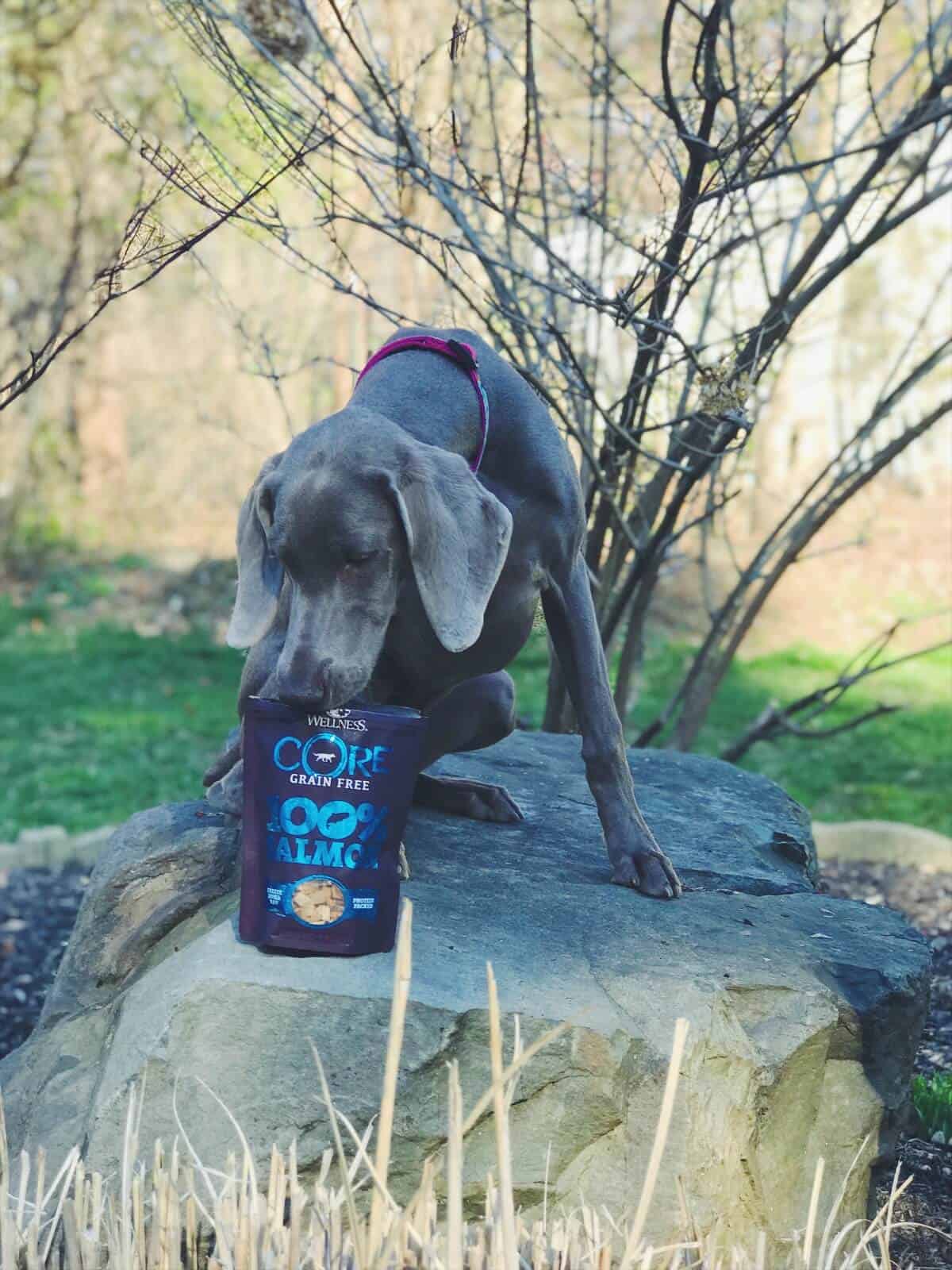 As a brand, Wellness is committed to making food that’s nourishing, good for your pet’s well-being and tastes great.

Holly really only cares about that last part but I’m all about the first part.

Her off-leash skills are coming along (thanks to Ulysses) and thanks to Wellness CORE RawRev 100% Freeze Dried treats, Holly doesn’t mind working on them!

Aw. Holly looks really adorable ???? And I'm really sorry for the Ginger but anyway, it's nice when you decide to have a new one :) Thanks for your food dog review , I will try it oneday as soon as I have a dog!