I just have to start this off by saying as I write this, I’m downing dark chocolate covered blueberries. So there’s that.

I have so many thoughts on this whole thing but let’s start with the stats. 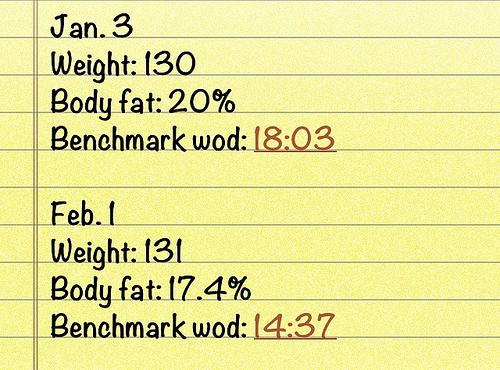 I didn’t lose weight but I fully did not expect to either. 130 is just “my” weight. I haven’t gotten below it in the past 3 years and unless I’m eating like absolute crap, I don’t tend to go much above it either. I’m a healthy weight for my height (5’7) and I’m happy with it. Body fat on the other hand is definitely something I had hoped would decrease and I’m psyched with the results of that. Since I know someone is going to ask, body fat was measured on a scale that does it. I know it’s far from the most accurate method but it was all we had access to. I’d like to think the trending is at least accurate since it was the same scale even if the actual numbers aren’t. And I’m also shocked at how much time I shaved off the benchmark wod. Apparently, fueling your body well really does impact performance. I knew that in theory but this was the first time I’d actually seen it happen on paper. 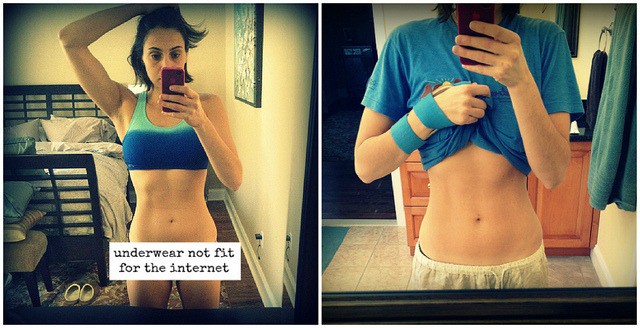 I didn’t really intend on posting a before and after. Hence why I’m in inappropriate underwear and pajamas (these were supposed to stay on my phone, not make their way to the blog) but what the heck… I wanted abs at the end of this. I didn’t get them but I do think I leaned out a bit. Interesting how body composition can change even when the scale doesn’t.

Something between where I was eating and this challenge. I’m not going back to absolutes because you know what that does to me? It makes me crave them more. Evidenced by my gorge of dark chocolate in every form I could get it last Friday. However, I will consciously limit my dairy intake going forward as the repercussions of large amounts aren’t worth it for me. I will definitely be bringing legumes back into my life in moderation as I don’t really buy into the paleo mindset on those. And as for grains, they were the one thing I didn’t really crave too much during the challenge because I barely ate them before. Will I eat pasta or rice or quinoa occasionally? Yes. Will it be every meal or even just once a day? No, because I just don’t eat that way. I prefer getting the bulk of my carbs from vegetables.

Despite the fact that I eat paleo 90%+ of the time, I really don’t think it’s for everyone. It’s getting a lot of mainstream attention these days and I think a lot of people are feeling compelled to try it as the “next diet”. I hate that. I hate that people ask me “what diet are you on?” I don’t think of it as a diet, I think of it as just a way of eating. Putting good, real food into my mouth. However, it’s taken me 3+ years to get to this point. When I first started revamping what I ate, I cleaned my pantry of everything “white” and replaced it with whole grains, I started consciously putting more vegetables on my plate, I slowly decreased my sugar consumption and changed my palate when it came to “sweets” and it’s just organically morphed to where I am today. I did not get to this point with food overnight and I think that if I had tried, I would’ve failed miserably. Too much change at once is hard to stick to permanently. So unless you have some medical issue that’s the impetus for a drastic overhaul of your diet, I think starting slow is a more realistic and most likely successful approach.

Also, one last pet peeve of the whole paleo thing…it’s not all about bacon and meat and more meat and fat. If you looked at my plates any of the 31 days I documented them on here, you’d see about 1/3 protein and 2/3 vegetables on almost every one. I ate far more vegetables than I did meat. When I hear people talking about how paleo is meat intense and high in fat, I get irked because it shouldn’t be. At least in my opinion.

The End. (because this truly feels like I just wrote a novel)

[…] have no brilliant insights this time around like I did last time with my recap of the whole experience. I feel pretty much exactly the same. Dairy bloats me like heck and makes […]

5 Tips to Stick with Healthy Eating - Running to the Kitchen

[…] big or go home” for the time being. In other words, don’t be drastic. I talked about this in my paleo challenge recap a couple of years ago, but making drastic changes to the way you eat is usually not the most […]

I am not typically a blog (or any other website) commenter but I felt compelled to tell you how much you hit the nail on the head with so many things in this post. I ate about 80-90% paleo since September when I began CrossFit, and am just finishing up my first whole30 challenge (in 4 days-not like I'm counting or anything!). I love the challenge you noted about eating/going out and having to be so conscious about what is in everything and/or try to explain it to people. So annoying! I tried as much as possible to avoid that but it just isn't possible all the time! And how people refer to paleo as a diet when I also prefer to think of it as just a way of eating. Can I add to that the amount of people who nod knowingly and say, "oh right, the low-carb diet" because apparently most people dont know that vegetables actually have plenty of carbs? It takes a lot of willpower not to try to educate people about nutrients and clean eating.

"the low carb diet" comment drives me batty. Completely agree, it can be very hard to not get all preachy on people sometimes when those are the comments you have to deal with. Good luck finishing up your whole30!

I almost never leave a response, however I browsed a few of the responses on this page Whole30 recap. I do have 2 questions for you if it's okay. Is it only me or do some of the remarks come across like they are coming from brain dead visitors? :-P And, if you are posting on other sites, I'd like to keep up with anything fresh you have to post. Could you post a list of all of your social networking pages like your twitter feed, Facebook page or linkedin profile?

I just found your blog and I'm so glad I did! I've been making small changes to my diet this year in an effort to get healthy and lose the weight I put on after college. Paleo is one diet/lifestyle that I considered trying (I love my meat and veggies) but it seemed so strict to me! I like the idea of eating whole food so much more and just finding balance for yourself. I love the occasional carb filled treat but if its only once and a while and whole grain to boot then who cares. I'd rather enjoy my life and the healthy foods I eat than spend my life constantly obsessing over perfectly adhering to a diet. Thanks for this blog post. I look forward to trying some of your recipes in the future.