AS AN AMAZON ASSOCIATE I EARN FROM QUALIFYING PURCHASES
460 shares 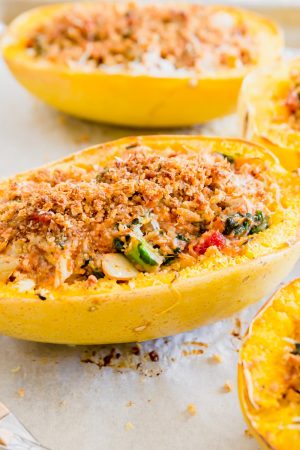 Delicious twice baked spaghetti squash is filled with spinach, artichokes, tomatoes and cheese. A lower carb, vegetarian and gluten-free dish that can be enjoyed as a side or meatless main course!

I didn’t always love spaghetti squash but the turning point in our relationship came when I stopped thinking of it as a substitution for pasta.

Even in this creamy pesto spaghetti squash recipe, I’ve trained my brain to think of it as squash, not a sub-par pasta noodle replacement.

And that mindset shift has made all the difference.

Listen, no matter how much tomato sauce and cheese you add to spaghetti squash, it’s just not going to taste like pasta.

So let’s throw that whole concept out the window and call a spade a spade.

Or in this case, twice baked spaghetti squash.

WHAT IS TWICE BAKED SPAGHETTI SQUASH

Just like twice baked potatoes, where you bake the potato two times in the oven, twice baked spaghetti squash is no different!

First, the spaghetti squash gets baked by itself until it’s tender enough to easily scrape out the strands.

Cheater method: bake the spaghetti squash in the microwave for a quicker recipe!

Next, those strands get tossed with some other ingredients to create a filling.

It’s the same concept as this stuffed honeynut squash recipe which is roasted then scooped, re-filled and baked again!

That filling then gets stuffed back into the squash, topped with some breadcrumbs and baked off again until the cheese is melted and everything is heated through.

Could this recipe be called stuffed spaghetti squash? Yeah, I guess so.

But the act of baking it twice seems to substantiate the “twice baked” preface.

For this recipe, you’ll need the following ingredients:

To start, halve the spaghetti squash lengthwise and remove the seeds. Save them to make roasted squash seeds!

Drizzle the flesh of the squash with olive oil, salt and pepper and place cut side down on a parchment lined baking sheet.

Bake the squash at 375°F until fork tender but not so tender that squash starts to collapse and lose shape, about 40 minutes.

The same method is used to roast red kuri squash before stuffing as well.

While squash bakes, make the filling.

When the squash is finished baking and has cooled enough to handle, scrape the center noodles out and place in the bowl with the filling ingredients.

Stir the filling mixture well until well combined then spoon back into each squash half.

Top each squash with additional cheese and breadcrumbs. Spritz the tops with cooking spray and return to the oven for 10 additional minutes.

Finish the twice baked squash under a broiler for 2-3 minutes until breadcrumbs are crispy and golden brown.

HOW TO SERVE TWICE BAKED SQUASH

This recipe can be enjoyed either as a side dish or a vegetarian main course.

For the side dish approach, cut each squash in half to create 8 servings.

If serving as a meatless main course, plate each half and dig in with a fork!

Some simple roasted broccoflower or roasted brussels sprouts on the stalk would round out the meal perfectly.

CAN THIS BE MADE VEGAN & GLUTEN-FREE?

Swap out your favorite plant based cheese for the pecorino romano in this recipe and the spaghetti squash easily becomes vegan.

As noted in the recipe card, I prefer pecorino romano to parmesan cheese because it’s a sheep’s milk cheese rather than cow.

If you avoid dairy because it’s hard on your stomach, sheep and goat milk dairy tend to be more agreeable on digestion than dairy from cows.

To make your own gf breadcrumbs, simply toast a slice of bread, let it cool then blitz it in a food processor or blender. Voila.

There’s no beating around the bush trying to turn it into a low carb version of pasta.

And once that becomes your mentality, spaghetti squash gets a whole lot tastier!

TRY THESE OTHER SQUASH RECIPES:

*I prefer pecorino romano to parmesan as it's a sheep's milk cheese rather than cow. Feel free to substitute parmesan in this recipe if preferred.

So much rich, vibrant flavor! I love the sundries tomatoes in this.

This was such a hit! Thank you for this awesome recipe.

I love making twice baked potatoes. Not sure why I hadn't thought of it for squash before. Adding these to my menu for next week!

I love this recipe! The second time I make it, and everyone in the family loves it!