These spaghetti squash latkes are spiced up with a little jalapeño and made a bit healthier with squash instead of potatoes.

Once upon a time I told you about my dad’s crazy “grew up in India but wasn’t Indian, mom from Italy in a family circus and dad from who knows where” background.

Crazy right? Well, it gets even better. 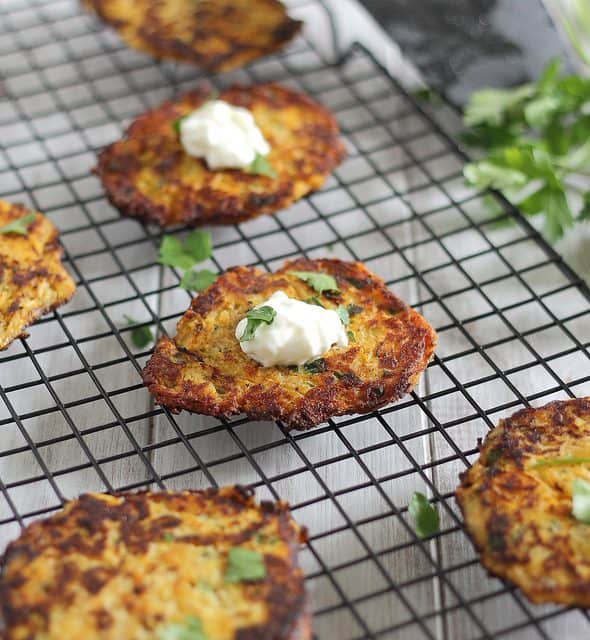 He was also raised Jewish by a pretty orthodox (from what I hear) grandfather, practiced until he left India at 18, then came to the states, met my mom and somehow they both not only convinced a priest to marry them in a Catholic church, but also allow my dad to take communion during the ceremony.

He eventually converted to Catholicism when I was in 5th grade and I very vividly remember sitting through that Easter vigil 3 hour mass for his ceremony. To a 9 year old it was the closet thing to physical torture that existed.

So he’s part Indian, but not really. Part Jewish, but not any more. And part Italian, part who the hell knows what else.

And yet with all that confusion as to religion and descent, we never even had a damn latke in my house once growing up.

The closest we got to any traditional Jewish food was a stale box of matzo in the pantry that really does nothing as far as bolstering the reputation of Jewish food.

What’s up with that, dad? 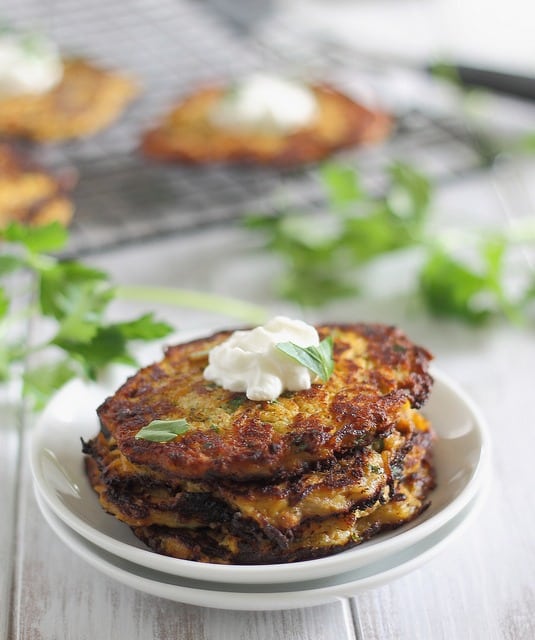 So for a girl who can’t even spell menorah without having to look it up or even begin to tell you the meaning behind it (I’m sure I learned it in ccd, but had we actually gotten graded in there, I probably would’ve come out with about a 23 as an average grade, religion just isn’t my thing),

They’re not traditional at all using spaghetti squash instead of potatoes (if you’re looking for a more traditional recipe, we love these potato pancakes), but that’s mainly because consuming an entire spaghetti squash by yourself goes a lot slower than you anticipated and are used to when there’s normally 2 people in a household.

And push was coming to shove with the shelf life remaining in that tupperware container.

So, I figured since tradition was already bucked, why not throw in some jalapeños to buck it up even more and make these spicy spaghetti squash latkes. 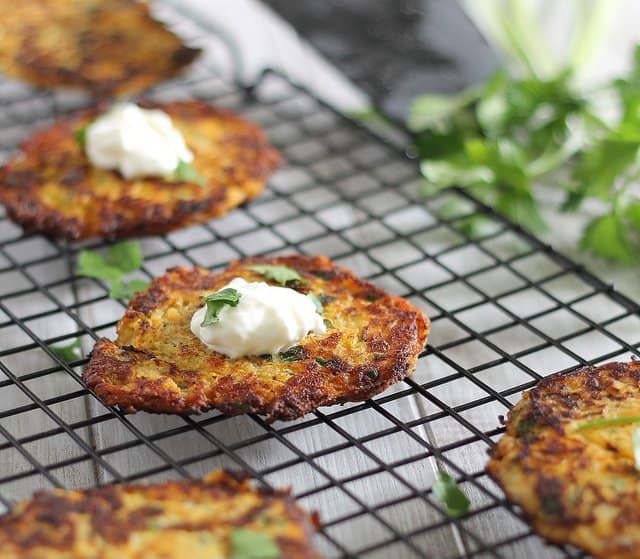 Crispy outsides with a hint of spice, perfect with some tart yogurt or apples on top depending on your mood.

Maybe I could just pretend to be Jewish for the food?

I made this with banana peppers instead of jalapenos and oh my god they are so good. Everyone in my family loves them. As the only one in my family who is vegetarian, I'm always on the lookout for good recipes to try to pull them from the dark side (haha). I love spaghetti squash and this is just perfect!

[…] brunch today happened to be Spicy Spaghetti Squash Latkes. It was inspired by this post at Running to the Kitchen. I also paired it with a couple fresh, fried eggs from my sweet little […]

Haunkkah Latkes ~ A Walk On The Wild Side

[…] Hope you saved some of your spaghetti squash your harvest last fall because this Latke recipe is made from just that … spaghetti squash. The recipe also calls for almond flour making it great for Paleo diets! Spaghetti Squash Latke Recipe ~ Running To The Kitchen […]

[…] these spicy spaghetti squash latkes at your next holiday dinner. They’re especially great since squash is in […]