AS AN AMAZON ASSOCIATE I EARN FROM QUALIFYING PURCHASES
207 shares 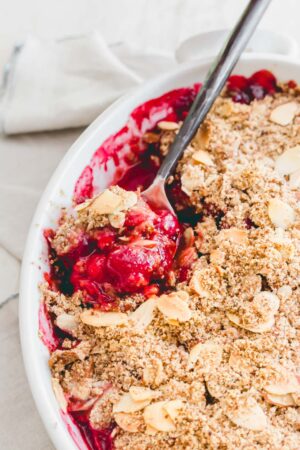 Fourth of July is this weekend.

And while I’m not and never have been one of those people to make foods in the form of anAmerican flag, I whole heartedly support a patriotic cherry pie-esque dessert.

I mean, does it get more Americana than cherry pie?

Personally, I don’t think so.

I know some will argue apple pie holds that title but I’m team cherry.

I can’t answer most “what’s your favorite food” type questions but when it comes to pie, my answer is hands down cherry pie. Every time.

Except, I have zero patience for making real pies from scratch.

The lazy (wo)man’s solution to dessert patriotism for this upcoming holiday weekend.

Let’s talk about the cherries for this sour cherry crisp.

In the past, I’ve usually used the term tart cherry. From tart cherry tea bread to mini tart cherry galettes (closest I’ll get to a homemade pie) and more.

When it comes to pie, however, I think “sour cherry” is more widely used so I’m using that for this sour cherry crisp since my intention was to mimic pie in the first place.

Whatever you call them, sour cherries or tart cherries are a bright red cherry when picked and retain that color when dried, frozen or juiced.

Their intense color makes anything you use them in a gorgeously striking hue like these tart cherry fudge thumbprints or this butternut squash goat cheese dip with tart cherry compote.

As the name suggests, their flavor is more sour and tart than sweet cherries. Not so much as they’ll cause any lip puckering like eating a lemon would but enough to distinguish them from their sweeter cousin.

Usually, this goes unnoticed in a sour cherry pie because so much sugar is added you’d never know!

This sour cherry crisp recipe however keeps the added sugar to a minimum so the wonderful true flavor of the sour cherries shine through.

If you like a little tang and freshness, you’ll love the flavor of this crisp.

Sour cherries also have some pretty impressive health benefits. I’ve written a lot about this in all my tart cherry recipes on here so just search “tart cherry” if you want more info.

This article is great at highlighting the differences between sweet and sour cherries if you want to learn more.

WHERE TO FIND SOUR CHERRIES

Their season is short and their availability in fresh form can be a bit limited.

I picked up a bunch at mine last week (the end of June in New York). Unfortunately, they’re usually only around for a couple weeks or so.

You can however find frozen sour cherries as well as canned sour cherries in the grocery store. They’re sometimes referred to as “pie cherries”, especially when canned.

If choosing the canned variety, make sure you’re buying sour cherries packed in water and not sour cherry pie filling.

It’s kind of like the difference between buying pumpkin puree vs. pumpkin pie filling.

One is just the fruit, the other is the fruit plus a bunch of sugar and additives. You want the former.

Pitting cherries is a chore, there’s no way around it.

That said, it’s a chore made exponentially easier by a kitchen gadget called a cherry pitter.

I pretty much make a rule of no uni-tasking kitchen gadgets in my house.

A cherry pitter, however, is one exception to this self-imposed rule and it’s a very welcomed one.

If you’ve ever tried pitting a pint of cherries with a knife or better yet, the metal straw approach, I know you feel me on this.

So do yourself a favor and if you plan on making this sour cherry crisp or anything with cherries, spend the $14 on a cherry pitter.

For the filling of the crisp, you’ll need the following:

As you’ll see in the pictures, I also used some strawberries and red currants in addition to the sour cherries for the crisp.

I simply didn’t have enough sour cherries to comprise the 4 cups I needed for the recipe so I improvised with other seasonal red berries.

Feel free to do the same if needed but, make sure to use at least 2 cups of sour cherries. Anything less than that and their lovely tart flavor gets drowned out by the other fruit.

For the crisp topping, you’ll need:

HOW TO MAKE SOUR CHERRY CRISP

Start by preheating your oven to 350°F.

The crisp can be baked in a pie dish, a baking dish or even a cast iron skillet. So grab one of those and set it aside.

Combine and toss the sour cherries with the fresh lemon juice in a large bowl.

Add the coconut sugar and arrowroot powder to the cherries and stir.

Transfer the mixture into the baking dish.

Make the topping by combining all the ingredients except the coconut oil in another bowl.

Add the softened (but not melted) coconut oil to the ingredients and combine using the tines of a fork or your (clean) fingers until a fine crumble texture results.

Sprinkle the crisp topping on top of the cherries in an even layer making sure to go right up to the edges of the baking dish.

Bake for 40-45 minutes until the cherries are bubbly and the topping has turned golden brown.

Remove from the oven and let the tart cherry crisp rest for at least 10 minutes before serving warm.

The longer it sits, the less liquidy it will be when serving.

This crisp is best served warm not hot.

As the crisp cools, the filling will gel/congeal a bit. When it first comes out of the oven it will be more loose and liquidy so I do suggest letting it sit for 10-20 minutes at least before serving.

To serve, scoop into bowls and either enjoy it as is or with a scoop of vanilla ice cream or some whipped cream or coconut cream on top.

Or, go full out cherry and try a scoop of roasted cherry chocolate chip frozen yogurt!

USING CANNED OR FROZEN SOUR CHERRIES FOR THE CRISP

If you can’t find fresh sour cherries and want to use either frozen or canned varieties that will work.

Just make sure that if using canned, you drain the cherries first.

If using frozen, thaw and drain before using.

CAN I USE CHERRY PIE FILLING FOR THIS CRISP?

As I mentioned before, cherry pie filling is already sweetened and usually uses thickeners and additives as well.

You can use pie filling since the cherries are sour cherries but I don’t suggest it.

The outcome will be much sweeter and the added ingredients aren’t ones I usually recommend.

This sour cherry crisp recipe was intended to be vegan and gluten-free so everyone can enjoy it.

But, if you have no need for that, feel free to use all-purpose flour in place of the sorghum (or oat flour).

Coconut oil can be replaced with cold butter as well.

Instead of coconut sugar, granulated sugar or brown sugar will both work.

And, arrowroot powder can be swapped with cornstarch.

There are plenty of ways to customize this crisp to what you have on hand so don’t be afraid to play around with the recipe a bit!

This is one of those questions that I sometimes ponder way too much.

It’s sort of like the difference between bread pudding and baked French toast. I discuss that at length in my chocolate strawberry bread pudding recipe.

Well, a quick search on the internet tells me almost but not quite.

Both crisps and crumbles contain fresh fruit. But, a crisp apparently uses oats whereas crumbles do not.

If that’s the true definition, maybe this should be called a sour cherry crumble?

My microwave apple crisp uses oats but then there’s my paleo strawberry ginger crisp that doesn’t.

I think time has blurred the lines on the difference between these two terms and just like tart vs. sour when it comes to the cherries, crisp vs. crumble doesn’t matter either.

It’s a summer dessert without a limit on names.

No matter what you call it, it’s downright delicious and perfect for any festive celebration of our country’s Independence or just an enjoyable seasonal summer dessert!

In the mood for something more decadent? Try these gluten free cherry cheesecake bars!

I made this without the sorghum flour or arrow root powder - I substituted coconut flour for the sorghum and tapioca starch for the arrow root powder. Consequently, it turned out pretty dry. Next time I'll make it with the correct ingredients and hope that it turns out like everyone else's cobbler!

The tapioca is fine to sub in for the arrowroot but coconut flour is a much different flour than sorghum (or the oat flour recommended as a sub), It can't be used 1:1 in recipes for other flours as it's way more absorbent and honestly, just acts completely different. Hope you try it again!

I don't cook with cherries nearly enough. This cherry crisp looks incredible, and I love the suggestion to serve with some ice cream. So excited to try it!

What a great crisp! Made this with some strawberries and it was wonderfully sweet and tart and the topping… so good!!

We had some frozen sour cherries to use up from this past season and it turned out great!

I adore anything with cherries and this crisp looks amazing.