So who was glued to their TV or computer yesterday watching the NYC marathon? <—ME! I watched the coverage for the first time last year and can guarantee that if I wasn’t already into running, I would’ve been after that. I’m seriously amazed by those runners who can run 26 miles at an average pace that I couldn’t pull off for even 1 mile. My mom came over for the last 20 minutes because we were about to head out for a bike ride and put it perfectly when I was saying how the lead women were running at the speed I bike at, “comparing yourself to Mary Keitany is like comparing a greyhound and a basset hound in a race.” So now on my next run, I’ll be picturing myself 2 inches from the ground with ears flopping about.  Thanks mom.

I wish I had realized the date of the marathon when making my training schedule because I would’ve loved to have had a long run on tap yesterday with all the energy I got from watching the race. I’ve never had any ambition to run a full marathon (13.1 is hard enough!) but after yesterday, I can’t say the thought didn’t cross my mind. I’m sure it will be gone by the end of the week, don’t worry.

Onto week 8. 2 more weeks until the big day!

I was still set on making up my missed mileage from the previous week (which faded out later in the week) so I hoped on the treadmill for 4 miles, constantly switching the speeds between 6.5-7.0 to keep myself entertained. I planned on 5, but only made it to 4. A decent run though all in all.

This was the most interrupted long run I’ve had for a few reasons. This was one of them. 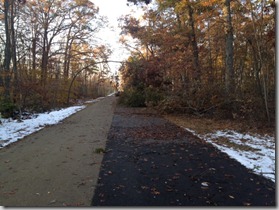 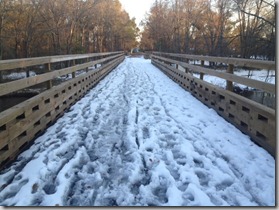 Hopping trees and sludging through snow definitely make for an interesting 11 miles. See that snow on the right? That was a bridge on the bike trail that goes over a creek. The rest of the trail wasn’t that bad. It made me think of those “bridge ices before roadway” signs on the highway. Apparently, that’s true.

The other reasons were a combination of texts, phone calls and emails that all required immediate responses (the downfall of using your iphone as an ipod.) But, it was still a great run. My times were interesting. I ran 2 miles from my house to the trail, 7 miles on the trail and 2 miles back home. Average pace on the roads without a snowy/treefallen obstacle course: 8:40. Average pace on the trail: 9:00. I ended the run with an 8:55 pace and felt great. I also wasn’t nearly as sore the following days as I was after 10, weird.

Jillian and I have rekindled our love (we were going strong last fall) so I did a Yoga Meltdown workout and a lot of stretching.

More Jillian in the form of 30 Day Shred. It’s funny, even with a pretty consistent NROLFW strength training plan recently, my arms are still aching from this workout and I was only using 5lb weights!

The bike trail was finally cleared and melted so I headed out for a 5 mile tempo run. Felt awesome after this.

I’m psyched to have finally hit 20 miles this week! Also, you may have noticed I didn’t do any NROLFW. I’m thinking about not starting stage 4 until after the race. I don’t need any injuries from lifting and my goal right now is to finish this half strong (hopefully PR.) I’d been finding it difficult to feel completely “recovered” from my long runs with NROLFW in the mix as well so right now I think some Jillian Michaels DVDs are a better fit for mid week “strength training.” And lastly, I’m really hoping this is nothing, but I woke up on Friday with a slight “tingle” under my left knee cap. I wouldn’t really call it pain right now but it just feels slightly off. It didn’t hurt while running on Saturday but when I’m not, I can feel it. Anyone know what that could be? I’m scared to google it and have so far held out from internet diagnosing myself because I tend to fear the worst in all situations like this.

Have you ever dealt with knee pain?

Did you watch the NYC marathon?

The last month I have been doing 30 day shred again once a week. Those 20 minutes kill me!

Nice training! Hope the knee feels better, girl <3 I don't think I made it that far in NROLW!!

Hmm, could be runner's knee? I have experienced that and now wear two patella straps and it does the trick nicely (keeps the kneecap from shifting when you run, which is what causes the pain).

I bet after your half marathon you will be itching to run a whole marathon!!

I don't know, after the last one my thoughts were more like "Hell no! I don't even want to do another half, let alone a full!" haha We'll see :)

Every time I run a half I say I will never do a full. I can't imagine going another 13.1 miles. My friend entered the lottery for NY Marathon, thinking she would never get a spot her first time in the lottery. She got the spot and ran her first marathon yesterday in 4:08. If you're going to run a full then NY is your race. She said it was amazing!

I get IT band pain and tightness. I use the torture device known as a foam roller:) It helps...but I do yelp in pain while rolling!