On to week 3 of training. It’s starting to feel “real!”

The plan for last week:

The day I almost had a panic attack at the bike trail. Got to the beginning of the trail, get all my gear on in the car and turn the Garmin on to sync up…blank screen. No amount of pushing/holding the buttons would get it to turn on so I ended up using the stopwatch feature on my iPhone instead. Luckily, I started at the beginning of the trail and it has mile markers every .5 miles. Turned out to be my best long run yet at an average pace of 8:44. I frantically googled what could be wrong with the Garmin when I got home and the first troubleshooting link I clicked had it fixed in no time.

Having switched week 2’s rest day to Thursday, my legs were already pretty tired after 4 straight days of running and/or cycling. I contemplated moving NROLFW to sometime later in the week but with the wedding I knew there was no way to fit it in later so I sucked it up and did it. Thankfully, the second time around for workout 3A didn’t leave me as sore as the first time.

A planned 60 minutes on the bike turned into 35 when it starting heavily raining 4 miles in. I waited it out under a tree for a while and when it let up I started back home. Of course the rain started up again not 5 minutes after leaving the cover of that tree. I don’t mind riding in the rain on the bike trail but on the main roads it’s a pretty scary experience with trucks, buses, cars spraying water in your face as they pass you. I ended up looking something like a skunk with a nice huge water mark straight down the middle of my back from the bike tire.

More heavy rain made me spontaneously go downstairs and decide to check out the treadmill and see if it somehow miraculously decided to work again. Guess what? 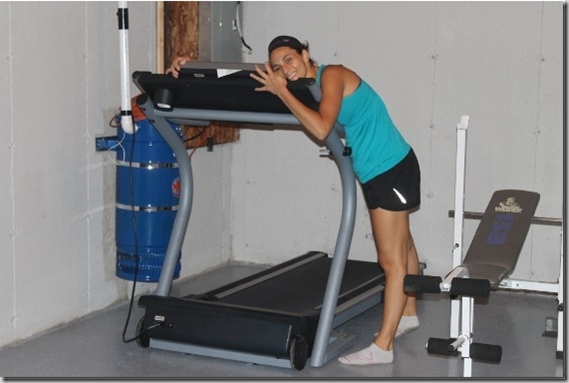 I welcomed it back to life with 6x400m speed intervals and ending up running a total of 4.25 miles with warm up, recoveries and cool down.

Planned rest for the wedding! 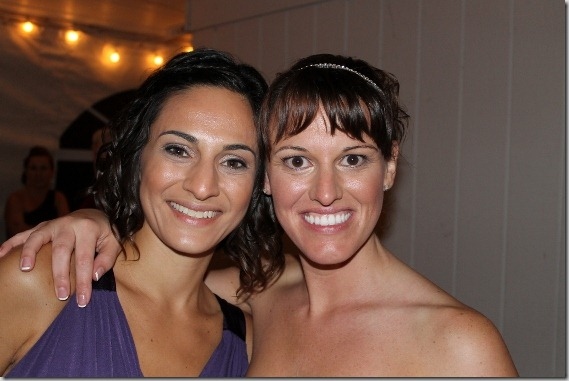 You’d think after sitting in a car for 4+ hours that I’d be looking forward to the planned 3 mile fast run to stretch out my legs but I was exhausted after being up until 3am and had zero motivation for this run. Somehow, it turned out better than expected though and I did a much better job maintaining the “race pace” I’m aiming for with these Sunday runs. 3 negative split miles with an average pace of 8:27. I came back and did a quick 30 minutes with NROLFW to close out the week.

This was 1 of 2 weeks during training that I knew I’d be traveling for so I’m glad that the week turned out like it was supposed to and I didn’t end up skipping workouts because of the other stuff going on. Week 5 & 6 are going to be much more tough with a 6 day work trip planned that spans an entire weekend. But first, week 4! 8 miles on the agenda for later today…they’re getting loooong.

What was your best workout of the week?

Anyone else training for a big race in November?

Good work on the training this week! I am about to try and head out of the door for a cheeky 13 mile run but am really struggling to find some motivation this weekend...

Yayyyy its ALIIVEEE! :) The best workout I did was 90 mins of Muay Thai on Friday... but then worst one I did was also 90 minutes of Muay Thai yesterday! Buggered up my foot! :( Looks like a long unplanned rest week is on the cards! Glad your training is going so well love! The runs are definitely getting long but they're gonna be a piece of cake for you! :)

Aw great job! Running after staying up late/traveling is HARD!