These roasted parsnips with cinnamon and brown sugar are the perfect holiday side dish. Roasted grapes and a sweet hummus drizzle make it a dish to remember!

It was during my first year of blogging, I thought a picture of a raw parsnip butt on the floor in my house was “artistic” and the dish itself looks like canned tuna in bowl.

With a spring of parsley for good measure of course.

If you can get past all that, it actually was a tasty dish, especially with the caramelized onions in there. But thankfully, my parsnip game has come a long way since January 2012 and today I’m sharing these cinnamon brown sugar roasted parsnips with roasted Concord grapes a sweet maple hummus dressing.

It’s a mouthful for sure but a tasty (and much prettier) one at least! 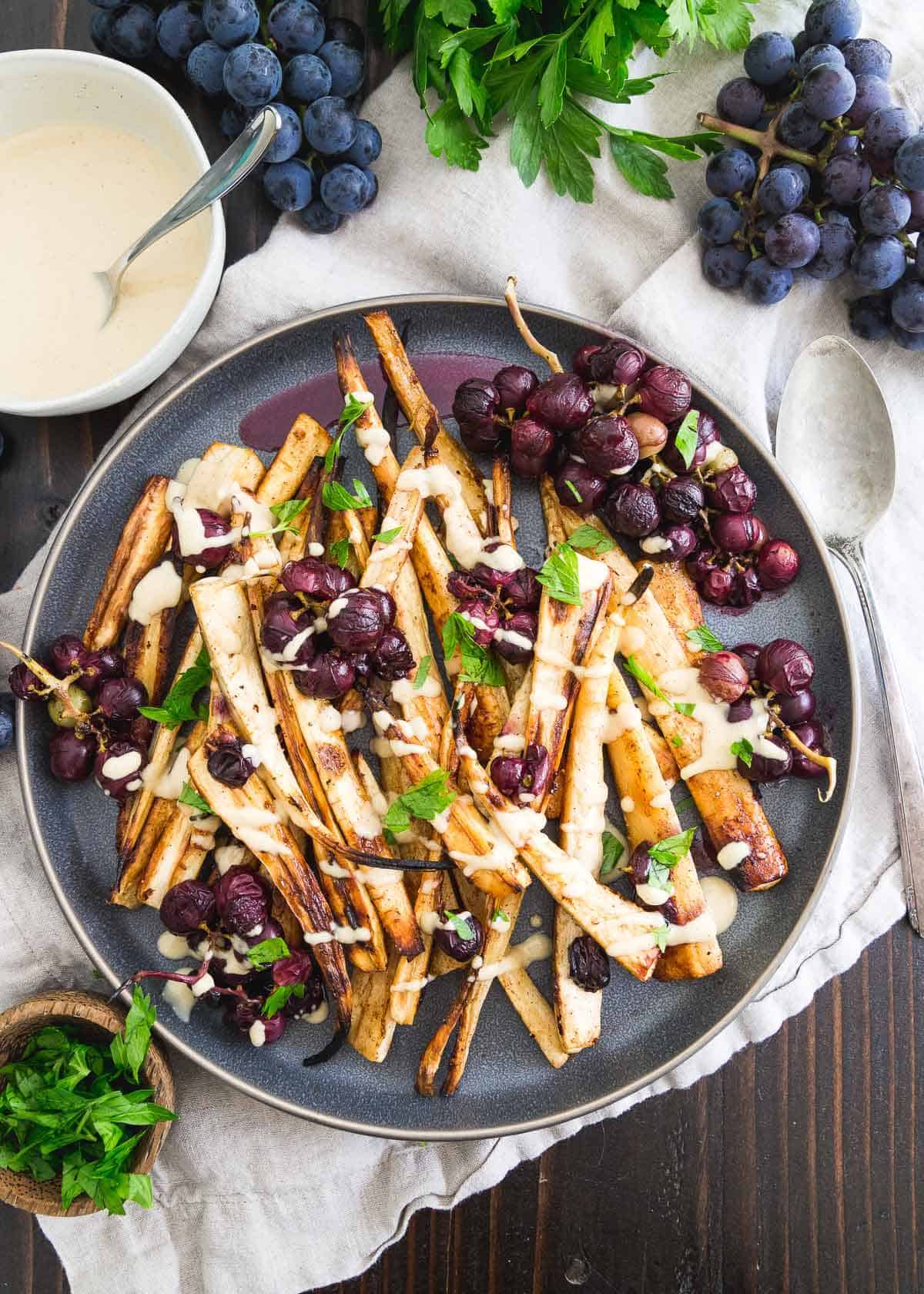 Much like the butternut squash hummus, this is the kind of holiday appetizer that’s perfect for a Friendsgiving scene.

Many would probably call it a bit *too weird* for family (unless you’re family is cooler than mine) and traditional Thanksgiving tastes but it’ll fit right in with your more open-minded foodie friends.

I found local Concord grapes at the store, tasted one and was instantly reminded of childhood peanut butter and jelly sandwiches (or pb&j muffins!).

It was such a strong connection, the grapes went in my cart without thought for some special use down the line.

A few days later while brainstorming this roasted parsnip recipe and the grapes got pulled out.

A sweet approach to roasted parsnips was decided on with cinnamon and brown sugar and then things got even more fun with a sweet maple hummus dressing to go with it.

I figured if people can be all about dessert hummus these days, why not riff on that for a dressing to go along with these sweet roasted parsnips and grapes?

I love how this recipe showcases the versatility of hummus and it’s ability to go down a sweet route too.

I’m pretty sure my friends are cool enough to go for something like this and I’ll totally be testing them out at our Friendsgiving gathering this year. Would you?!

Sabra wants to help you bring your friends together for an unforgettable Friendsgiving this year too.

Give their Pinterest board a visit for recipes, décor, ideas and more inspiration.

Gathering the ingredients for this holiday roasted parsnip recipe you might think you’re making dessert not a side dish.

The brown sugar, cinnamon and lemon zest are all stirred together with the melted butter and then tossed with the parsnips in a large bowl.

The parsnips get turned out onto a baking sheet then the grapes go into the same bowl to get lightly coated with the remainder of the butter, cinnamon and sugar mixture left inside.

Both the parsnips and grapes roast in a 425°F oven on separate baking sheets. The parsnips until they’re golden and starting to get crispy edges and the grapes until the start bursting and shriveling just a bit.

While those roast, the sweet maple hummus dressing gets made:

Everything just gets stirred together and water added until it’s the consistency you like for drizzling on top of the roasted parsnips and grapes.

This might be my favorite way to eat parsnips ever.

Parsnips have such a distinct flavor so you definitely still taste them but I think the cinnamon, brown sugar and butter mellow their sharpness out beautifully.

The roasting helps tame their sharp taste too just like in these parsnip fries which are also roasted in the oven around the same temperature as this recipe.

It’s almost like eating dessert as a side dish and the pop of sweet roasted grapes with each bite is so fun.

The sweet hummus dressing is creamy and delicious you’ll want to eat it by the spoonful, trust me!

It’s the icing on the parsnip cake so to speak and really brings everything together.

Roasted turnips and roasted radishes are two other vegetables totally transformed by their time in the oven. They’re a must try as well if you end up liking these roasted parsnips.

Can I use different grapes?

Yes, I would suggest red seedless grapes for an alternative to Concord.

Concord grapes have seeds so keep that in mind if you don’t like that texture.

Red seedless are a fine substitution.

Could I try this with another root vegetable?

If you don’t like parsnips, I think this would still work nicely with carrots. Rainbow carrots would be a nice touch if you can find them!

The sweetness in this recipe is similar to these brown sugar candied carrots – another great one to try.

You could also try roasting the parsnips in an air fryer like I do in my air fryer carrot recipe.

Another option would be sweet potatoes or butternut squash cut into sticks similar to the parsnips in this recipe.

This roasted kohlrabi recipe while not as sweet, sort of reminds me of these roasted parsnips as well.

Love the idea of this sweet roasted parsnip recipe? Make sure to give these recipes a shot too:

For the sweet maple hummus

For the sweet maple hummus:

1. Place all the ingredients in a small bowl (starting with 1 tablespoon of water) and stir vigorously until well combined.
2. Add water as needed to thin out to desired consistency.
3. Drizzle the hummus dressing on top of the parsnips and grapes before serving.
4. Garnish with fresh parsley if desired.

*If you prefer grapes without seeds, use red seedless grapes instead of Concord.

How elegant is this dish! This is perfect for the holidays.

Love this idea! Looks so delicious and I can't wait to try it!