These twice baked sweet potatoes with cinnamon cashew cream are a healthy way to indulge.

I think this recipe might be the first time I’ve ever had the patience to actually do the whole twice baked thing when it comes to potatoes.

I’m an incredibly impatient person so 4 or 5 minutes in the microwave pretty much always wins out over 90 in the oven.

Coincidentally, my “foodie” status (a word I personally despise) was questioned on my facebook page the other day for using the microwave (I guess foodies aren’t allowed modern day kitchen conveniences) in another recipe so how fitting that today’s post goes all old school and throws the oven in your face.

It also throws cinnamon cashew cream at you. Totally not old school.

In fact, totally new school where “foodies” blend the heck out of nuts and turn them into a creamy mixture.

Sweetened up with some cinnamon and brown sugar, these are the distant (healthier) version of that sickly sweet, marshmallow studded sweet potato casserole we’ve all had the misfortune of trying at some holiday dinner. 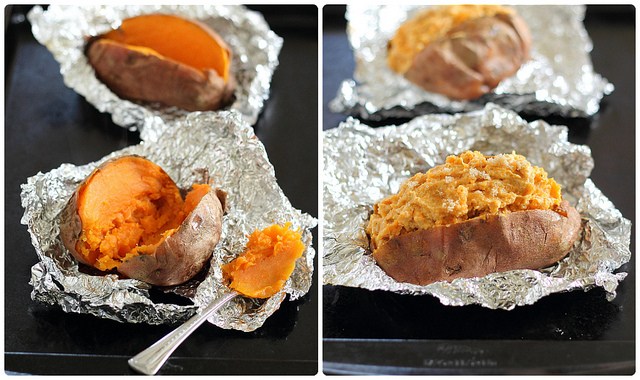 I know you’re going to look at the directions and think the fried sage leaves are superfluous and be tempted to leave them off.

The sage balances the sweetness of the potato perfectly.

Plus, the crunchy leaves are fun to chew on. 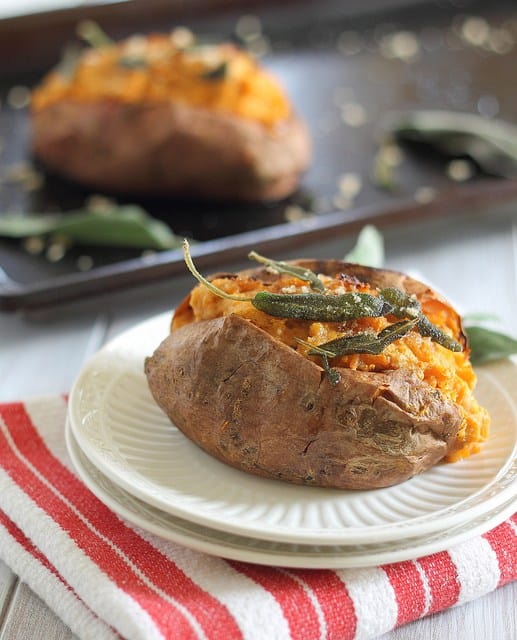 Make them and then relish the fact that you can now be called a true foodie because you used your oven to make a potato.

This will make more cashew cream than you need for stuffing the potatoes. Use extra on just about anything! (roasted vegetables, mixed in oatmeal, as a sweet dip, etc.)

How to Have a Vegetarian Thanksgiving | Say No To Food Waste

[…] To serve with the meatloaf, I made twice-baked sweet potatoes, loosely following this recipe. […]

[…] Photo and Recipe credit to Running to the Kitchen […]

These are so pretty and the flavor combination just sounds heavenly! Definitely need to try these.