An easy baked apple oatmeal breakfast with cinnamon, nutmeg and brown sugar. Almost like apple crisp but for breakfast and of course, healthier.

Before we get into this week’s What I Ate Wednesday, I have to say Happy Birthday to my mom.

Don’t worry mom, I won’t reveal what year this is. I’m on a plane to Texas right now so unfortunately I can’t celebrate with her today but hope it’s a good one!

Ready for some good eats? Let’s par-tay thanks to Jenn! 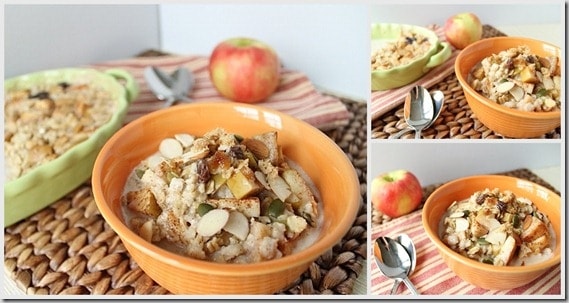 Usually I roll out of bed, eat something quick and get to work. I never leave enough time in the morning for “involved” breakfasts. Sleep always wins.

I don’t know why, but I got the idea of a baked apple oatmeal in my head the night before and was determined to test it out. Boy am I glad I did.

Oats, apples, cinnamon, brown sugar all came together for an almost apple crisp like breakfast, but of course a bit healthier.  There are so many variations I’m excited to try this with now. The recipe for this one is below since I loved it so much. I eat stovetop oatmeal all the time for breakfast so this was a fun new way to enjoy oats.

It was one of those days where none of the “normal” lunch ideas sounded good. I ended up throwing some quinoa to cook without a real plan and 20 minutes later ended up with a burrito bowl of sorts. 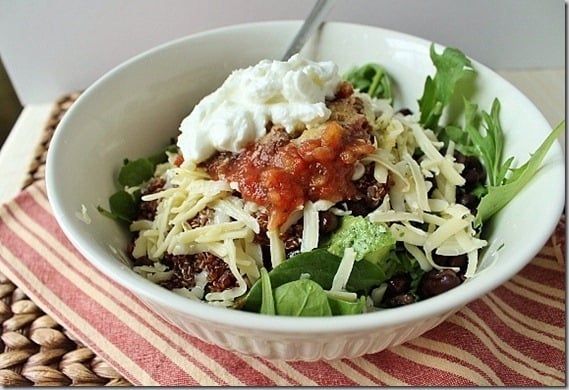 A base of spinach, arugula and salad with black beans, cheddar, avocado, tomatoes, nutritional yeast, salsa, greek yogurt and quinoa on top. Random but good. 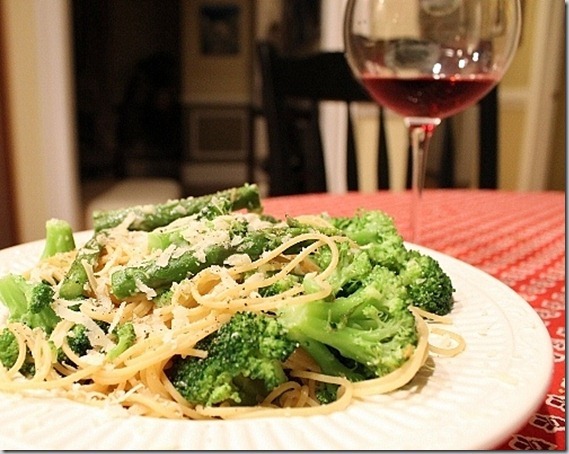 Dinner almost didn’t happen. For some reason I’ve been pretty unmotivated when it comes to this meal lately. No idea what’s going on there but last minute instead of succumbing to cereal or salad, I decided to do a mock carbonara of sorts using the asparagus and broccoli in the fridge.

I blanched the veggies then sautéed them with garlic and olive oil while the pasta cooked. Drained the pasta, and poured in a mixture of a beaten egg, pasta water, heavy cream and parmesan cheese. Tossed to “cook” the egg and added in the veggies. A lighter, carbonara sans bacon. It was ok. Could’ve used some more “sauce” but better than cereal I guess.

I had the last one of pumpkin cranberry chocolate chip bars for some dessert later on with tea while watching Ginger spend 15 minutes trying to “fluff” her bed with her front paws. She was getting so mad at it she started biting the corners in frustration.

It was the funniest thing I’ve ever seen. Wish I had gotten it on video. I’m sure she was wishing she was on a different kind of bed like I caught her on earlier this week. 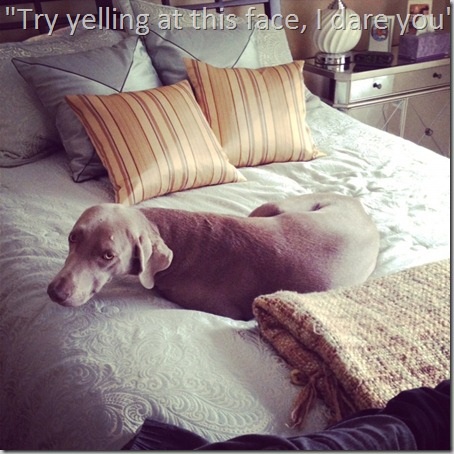 Guilty. She’s not allowed on any furniture in the house, especially beds.

This was quite the surprise to see when I got out of the shower. Not sure what got into her but she’s lucky she’s cute.

Of course being the serious “mom” I am, I took a picture before yelling at her to get down.

And if you love apple oatmeal, this stove-top apple cinnamon oatmeal recipe is a good one too!

*I don't think the heavy cream is necessary, I just had some on hand I was trying to use up. Any milk combination will work for the wet ingredients.

Do you let your pets on the furniture? 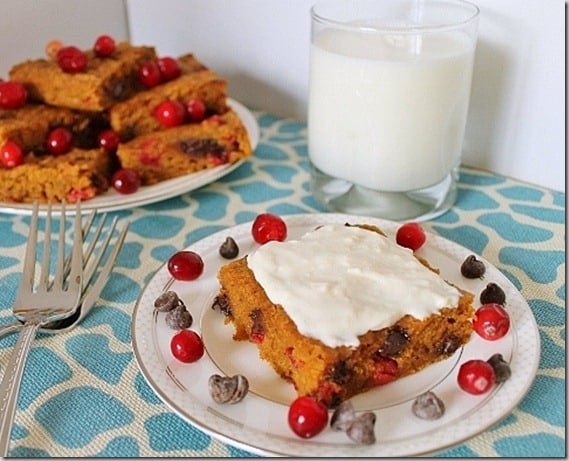 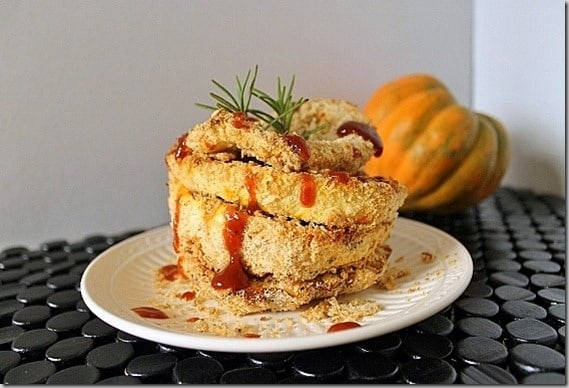 Delicious, great texture!! Made this yummy oatmeal just this morning and my dad and I both loved it. We are picky oatmeal eaters and love baked oatmeal. This is the first recipe I have seen/made that does not use eggs and take 50+ mins to bake. Great recipe!!

and Ginger looks SO cute. I can just picture the fluffing... Basil flips blankets up with his nose, then dives under them. If I am nearby, he will paw at me until I help him. :D

Oh gosh... that lunch - no matter how random- looks great. Sometimes the random things you throw together are the best!! Great food pics too, btw. :)

While the oatmeal looks yummy, I can't get that burrito bowl out of my head! YUM, I might just have to make one for lunch :)

Have a safe trip!