Yesterday was my first ever 10K race. I wish I could say it was my best race, but it definitely wasn’t. Not bad, just not the best. The “over scenic, shaded rolling terrain” as described in the sign below is basically the best euphemism I’ve ever heard for HILLY. 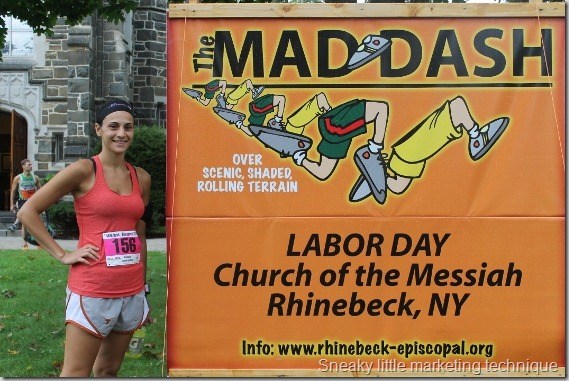 The temperature wasn’t bad, a nice average 72 for late September but the humidity was 95% and the air was thick. I have asthma and there are two types of weather conditions that make it flare up. Extreme cold and extreme humidity. I knew this going into the race once I checked the forecast this morning, so I had some time to try and adjust my expectations but, it’s hard (at least for me) to race and not want to do my absolute best time-wise. Knowing I can run faster in better conditions always leaves me annoyed that I couldn’t do it this time. I’m working on that.

Packet pick-up ended at 8:15 but the 10K didn’t start until 9am so we had some time to hang around, use bathrooms and actually watch some of the 5K’ers finish. 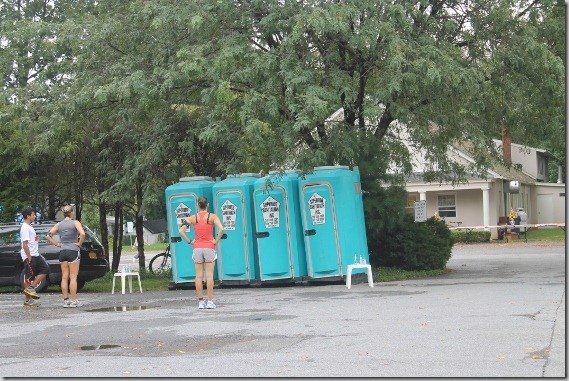 The benefit of a small race? Check out that port-a-potty line! Just me. I thought it was funny Ulysses took a picture of this but it does epitomize every road race, doesn’t it?

About 10 minutes until the 10K start time I started to get worried there was no announcement for where the start was. There were no signs so I assumed there would be an announcement. Wrong. Thankfully, some other people had heard it was down the street and around the corner so I followed them and literally got to the crowd as soon as the race started, on a hill. That should have been my signal as to how hilly this course was going to be. 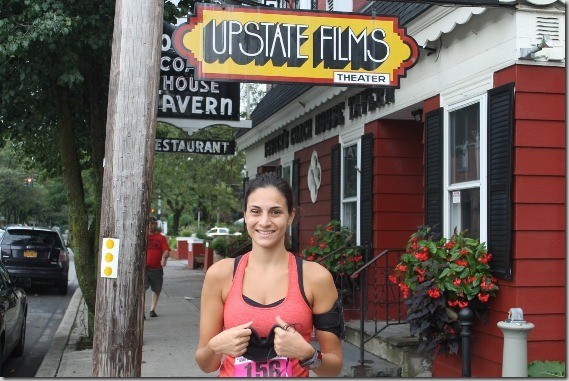 The first mile was actually mostly downhill and not bad at all. Mile 2 was somewhat flat but after that the “rolling hills” definitely started rolling and it felt like the corresponding downhills of every uphill were no where as long or steep.

I walked through the first water station (mostly because every time I try to run and drink, I choke) but quickly started running again. Come the second water station though somewhere in mile 3, I took a 15 second walk break and they just got progressively longer as the miles went on. I walked more during this race than I did the Palm Beach half last year. I would force myself up the hills (I ran every one) but then I’d get to the top and feel like I was going to die and have to walk for a bit. In retrospect, it probably would’ve been smarter to just walk a portion of the hills themselves and leave the flat terrain for running.

My splits were all over the place and definitely not my strongest but had I known the terrain better I think I would’ve both saved more of my energy in the first 2 miles and trained a bit more for the hills!

Splits according to the Garmin

With about 3/4 of a mile left, I had stopped to walk at the top of the biggest hill of the course for about 5 seconds when a girl came up next to me and waved me on saying “come on!” I cannot thank her enough for that boost of motivation. I’ve never run a race when someone has actually encouraged me while running and it was the exact thing I needed at that moment. We ended up running side by side until the end and talking a bit. It was her first 10K too and she is training for the Philly half in a couple weeks. We were both saying how hilly the course was and how neither of us really train outside of flat terrain. I doubt she’ll find the blog but if for some reason she does, thank you Amanda!

Once I saw Ulysses about 1/4 mile from the finish line, I waved her on this time and we sprinted for the end. 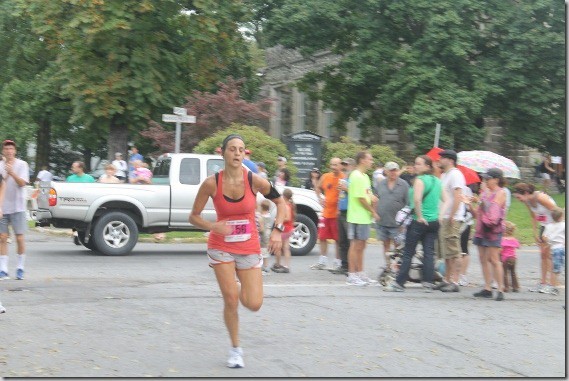 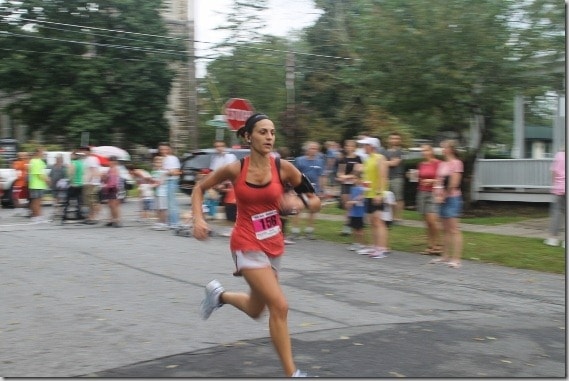 I had honestly stopped looking at the time on the Garmin after about mile 3 when I saw a “9” in front of my pace. I don’t run 9 minute miles when training and I knew looking at it would only discourage me more. After setting what I thought to be an “easy” goal of 55 minutes, I was getting worried I might be pretty close to it by the end given all the walking I did so I tried to finish strong and fast. Once I rounded the corner to the finish, I saw the clock at just under 54:00 and made that my goal. My chip time ended up being 54:00 exactly for an average pace of 8:42.

It’s kind of weird to think I ran a 5 mile race 3 months ago at an 8:11 pace when yesterday’s was over 30 seconds slower per mile. While I know the hills + humidity were huge factors, I can’t help but wonder if I’ve gotten slower?

So, I have mixed emotions about the race. On one hand I’m happy to have finished, finished strong at that and to still have kept a respectable pace (for me). On the other hand, as I mentioned earlier, I’m slightly annoyed and frustrated that I know I could’ve done better had the weather been different and had I trained better for the actual course. I guess what it comes down to is 1. I can’t control the weather and 2. I can prepare better for the terrain. So I can own half of my frustration.

All in all though, it was a great Labor Day, I ran 6+ miles, made chocolate chip dough balls when we got home and ended the day visiting some friends and their newborn twins. I can’t complain.

What’s next on the race front? We’ll see… 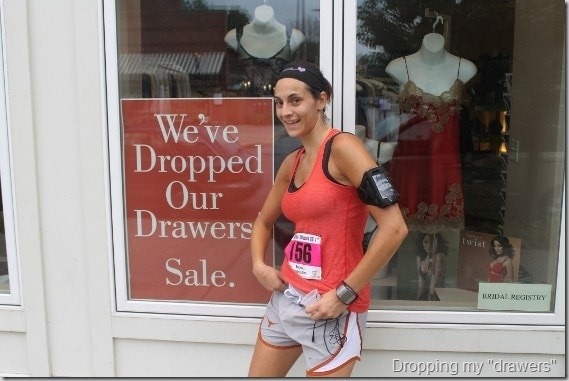 Tell me the best thing about your weekend. I have a lot of reading to catch up on!

New to your blog today and when I got here I saw Rhinebeck and it made me read on! I grew up about 45 minutes south of there but live in Hawaii now so what a treat to find a cool new blog to read and see something familiar on it!!

Becky @ Fit Chick on the Fly

Great job! Don't be discouraged about your time, the hills and humidity can play a HUGE factor in your time.

You're legs look awesome in those sprinting pictures, that's better than a good time right?

What I ate Wednesday french toast