Yesterday morning started out like every other race morning, EARLY! Every single race I’ve done I wake up with the same thought: “why, oh why did I sign up for this? I could totally just go run X miles myself today and not have to be up this early.”

The weather was horrendous and as I listened to the rain that was so hard it sounded like hail hit the skylight in my bathroom I’d be lying if I said the thought to just skip the race and forfeit the $20 registration fee didn’t enter my mind. If it wasn’t for the fact that I was meeting my brother and his girlfriend in Hoboken and that I had blogged about it already, I might’ve just gotten back in bed.

Of course in the end it’s always worth it and the satisfaction of another race under your belt definitely trumps the wake up call. It’s just a little hard to remember that when this is what you’re driving through to get there.

Note that the windshield wipers are on their “frantic” speed here. You know, the highest one where they’re going so fast you think they might just fly off.

Side note: improper frequency of windshield wipers is a HUGE pet peeve of mine. It has to be coming down in buckets for me to even contemplate using that speed. This was the kind of rain that is so loud and hard you can’t hear your radio and your hands are on the steering wheel at 10 & 2 like you’re 16 taking your driving test. I probably shouldn’t have been operating a camera at the same time. The things I do for blog content!

1.5 hours later I got to Hoboken and thankfully the rain had stopped. We picked up our bibs, used the nasty port-a-potties and headed to the start. 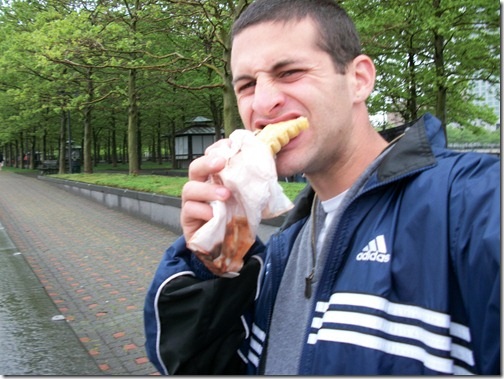 Adrian was a spectator/cheerleader/photographer this year so he got to eat yummy chocolate, pear croissants while Doreen and I stretched. 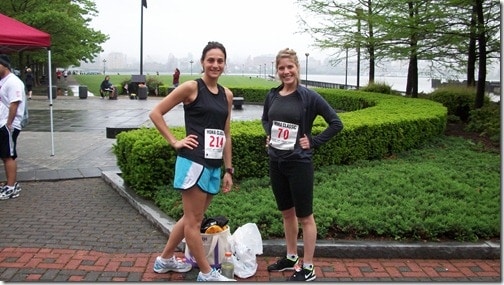 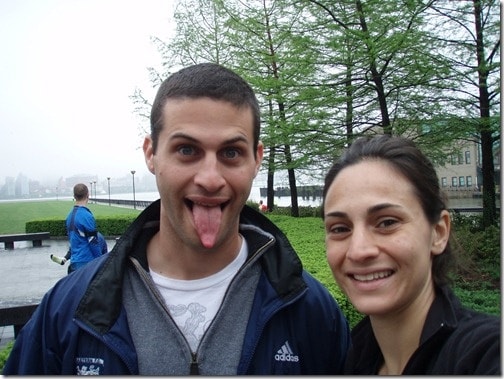 Scary and how ‘bout those bags under my eyes!

They changed the course a little this year so we had to walk a few blocks to the start. 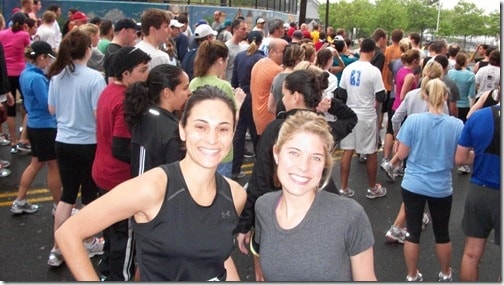 Why do we look insanely white compared to everyone else? 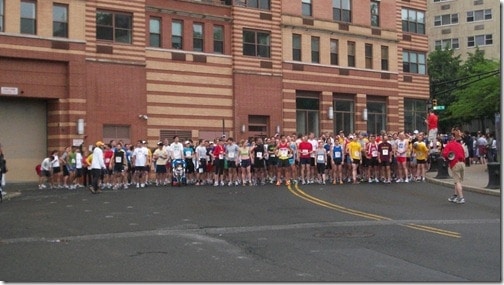 We discussed paces right before the start so we knew we wouldn’t really be running this “together”. Doreen is super fast! Even with me thinking I’d be about 20-30 seconds faster per mile this year than last, she still paces quite a bit faster than that. Her goal was to beat Adrian’s time last year of 36:08. So after about the first 1/2 mile I couldn’t even see her anymore.

The course was very similar for the first 4 miles even though they started in a different place so I knew what to expect. Mile 1 was flat and fast but at mile 2 you enter Stevens Institute of Technology’s campus which is full of hills! Last year it kind of took me by surprise so it was nice knowing what to expect this time around. The next 2 miles were again very similar and flat. The last mile they added in a loop through a new park to make the course an exact 5 miles. Last year the course was short (4.94 miles) and while that was great for reducing my pace and time, it’s nice to run a course that’s the exact length it’s supposed to be. 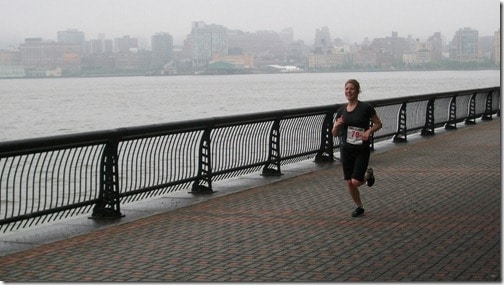 Doreen on the final stretch. 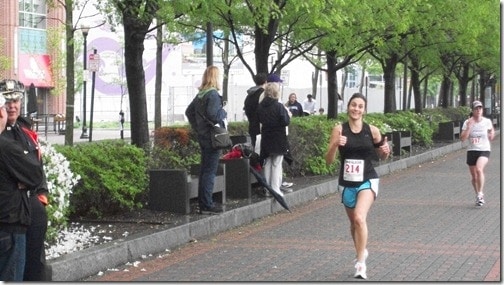 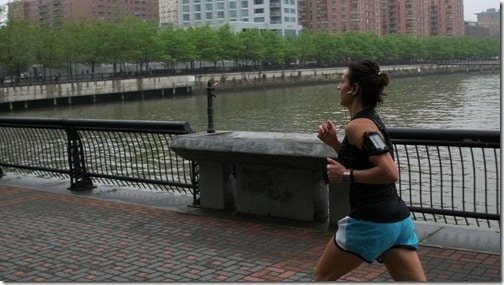 “Sprinting” at the end.

Curious if Doreen beat Adrian’s time? Sooooo close! She clocked in at 36:51. I told you she was fast! She killed it! 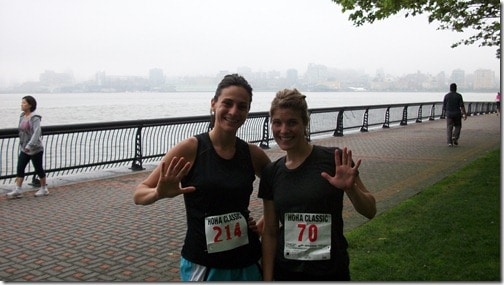 Then onto the best part about any race, food! We headed to La Isla, just like last year for their famous “stuffed french toast”. It was on Food Network’s Throwdown with Bobby Flay. Bobby lost.

The place is kind of a hole in the wall but, like most of those places the food is delicious. 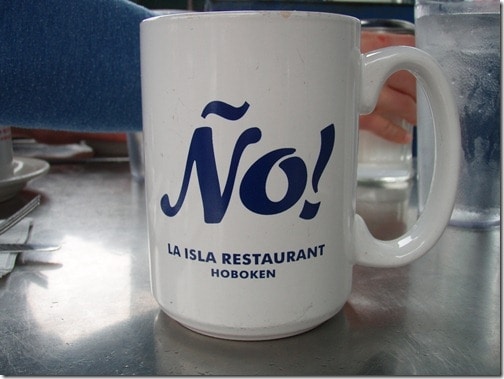 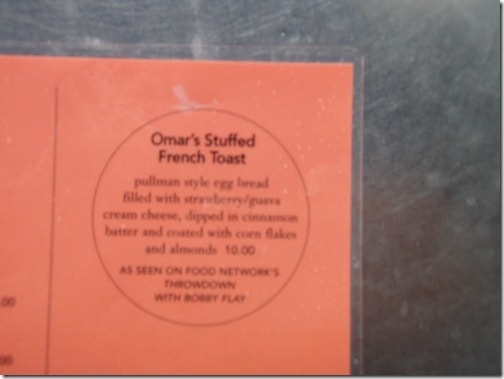 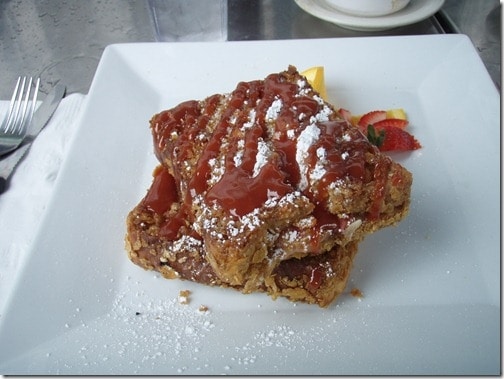 This picture doesn’t even come close to doing this bad boy justice. 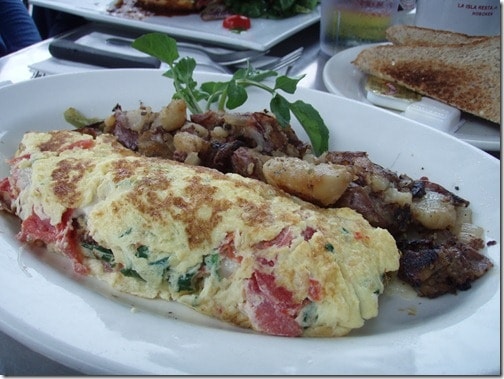 We all split everything and left perfectly satisfied. 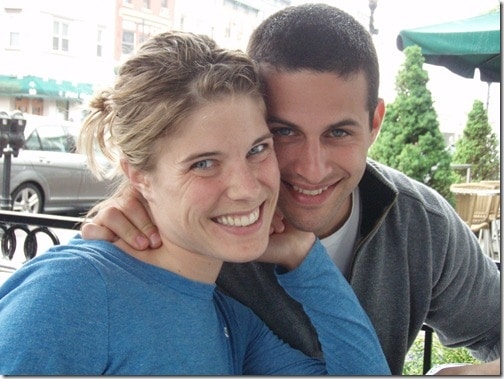 And then it started raining again.

Anyone else race this weekend? How’d you do?

You two did great! It was killer to have to sit and watch this year while I chowed down on that pastry.... it really pained me.

I may have to come out of retirement next year and do it under 35min.... that might require a little training though... we'll see!

I ran a marathon on Sunday, and it was soooo rainy, cold and windy! I also had the thought of ditching the race (I just ran a marathon the week before), but I had already blogged about trying to challenge myself and all that, so I did it and also PR'd! Maybe something about the rain was lucky for us!

Nice job on the marathon! (just saw your time on your blog) 2 marathons in a week is beyond impressive!