AS AN AMAZON ASSOCIATE I EARN FROM QUALIFYING PURCHASES
27 shares

This paleo chocolate mousse is decadent, creamy and topped with a quick strawberry chia sauce for a burst of brightness in each bite.

I dated my husband for 7 years before we got engaged. We were engaged for 1.5 years. That’s 8.5 years before marriage of knowing someone and guess what I found out AFTER we had sealed the deal? 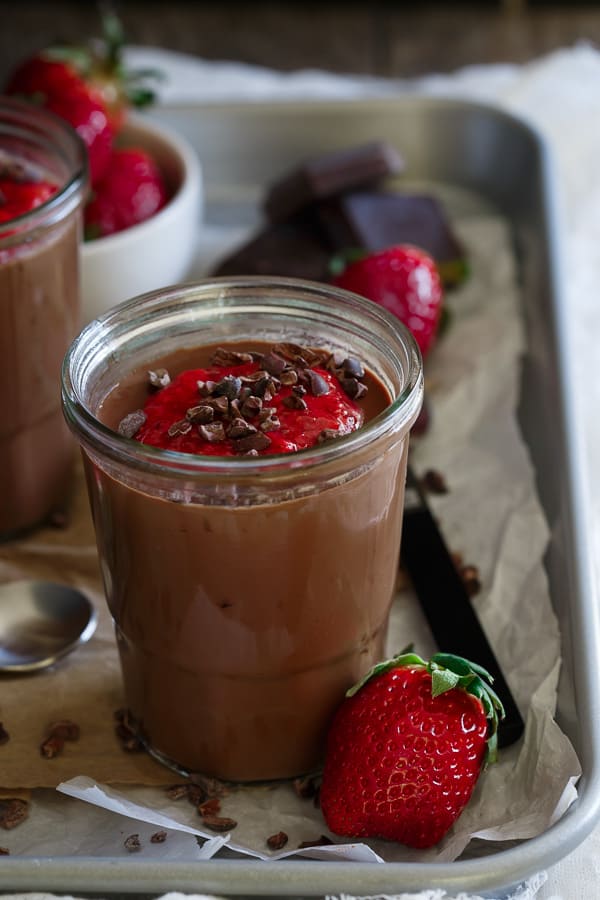 I have no idea how this incredibly important personality trait didn’t come to light before dessert one random night somewhere in the first month of marriage but I felt like I could hear the screeching brake sound in my head when he said the words aloud.

Was it too late to back out?

I feel like this could definitely be legitimate grounds for an annulment, right?

Some people don’t get why this is a big deal. “He can eat whatever he wants, you eat what you want” they say but what they don’t think about is dinners out and the strategic dessert selection choice at the end of the meal. 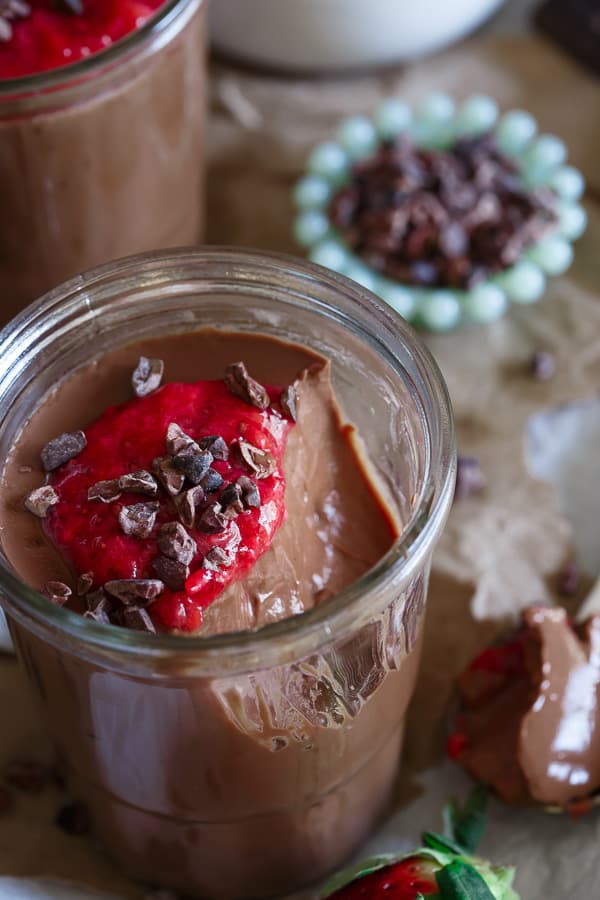 As a chocolate LOVER, I want whatever chocolate thing is on that dessert menu, but as a typical indecisive woman when presented with a menu, I want to try more than just that.

Well when there’s a chocolate hater in the crowd, you can’t get both those things.

And that is why dessert is pretty much ruined for me any time we go out to eat. No, I’m not being the least bit dramatic…

There is one good thing about this though, when I’m home and I’m craving a brownie hard core (like this fudgy paleo skillet brownie), I know I won’t have to share.

Just like with this paleo chocolate mousse. It’s about as decadently chocolate as you can get which ensures I don’t have to worry about husbands by the name of Ulysses creeping on my dessert.

Check out this paleo chocolate mousse recipe over on Food Fanatic’s website too!

Can I substitute honey for the coconut sugar? I want to make this today and can't get to Whole Foods for coconut sugar.

I'm betting that would work just fine, haven't tried it but shouldn't be an issue.

It makes me laugh so hard that you didn't know this until 8 years in ha!

Even so, I'll come eat some Fudgy Paleo Skillet Brownies whenever you need some help:)

Love that these ingredients are all natural and healthy! I'm so tired of seeing dessert recipes that are full of whipped topping, mixes and cans! Ugh! And people feed this stuff to their children, who don't know any better. IT's very sad to me, and I'm happy to see something tasty, natural and healthy here, instead!!

I married a non-chocolate lover, too. I don't know what happened there...hard to understand ;) This looks so good. So creamy and rich. Love that you used coconut milk (another thing my crazy husband doesn't like). So apparently this dessert is all for me! That works!