AS AN AMAZON ASSOCIATE I EARN FROM QUALIFYING PURCHASES
45 shares 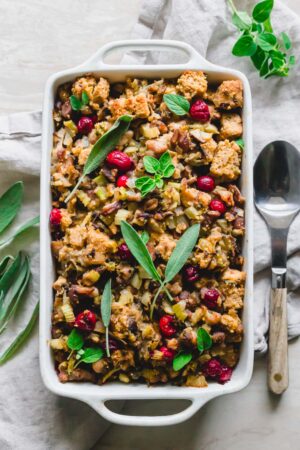 This chestnut stuffing is made with toasted cubes of homemade cornbread and filled with sausage, mushrooms, fennel, cranberries and fresh winter herbs like rosemary and sage.

It’s a wonderfully festive and incredibly delicious addition to any holiday meal and might even outshine the main dish!

I think it’s probably fair to say we all have one dish in particular that epitomizes Thanksgiving. Without it, the holiday just doesn’t feel right and you look forward to those couple bites all year round.

For me, that’s my mom’s stuffing.

The bird itself actually does nothing for me and we’ve even recently had Thanksgiving meals with this cranberry goat cheese butterflied leg of lamb one year and salmon another after finally acknowledging no one cared about the turkey.

But the non-negotiable for me and my brother is always mom’s stuffing. No matter what else is served (and we tend to rotate through different sides every year), the stuffing had to be there.

What I love most about her recipe is that it’s essentially a meal unto itself. I made these sausage cranberry apple stuffing muffins a few years ago riffing off my mom’s recipe.

And if you go check out the ingredients in those, you’ll see there’s practically everything but the kitchen sink in there.

I distinctly remember the first time I tasted a Thanksgiving stuffing that wasn’t my mom’s (it was in college at our Thanksgiving feast in the cafeteria before going home for break) and being hugely disappointed upon the first forkful.

It was basically just mushy bread with a few pieces of celery and onion and my first thought was “um, wtf it THIS?!”

In this chestnut stuffing recipe, all three are accomplished.

Grabbing a pack of vacuum sealed roasted and peeled chestnuts at the grocery store is crucial in keeping this stuffing recipe manageable.

The last thing anyone wants to be doing during Thanksgiving meal prep is roasting and peeling chestnuts!

The roughly chopped chestnuts are the star of the show in the stuffing but their supporting actors are big time too. Everyone’s an A-lister in this recipe!

The flavors are big and bold and this is the kind of stuffing recipe that will grab people’s attention on a holiday table. It’s not just “the thing served with the turkey” if you know what I mean.

HOW TO MAKE THIS CHESTNUT STUFFING RECIPE

Stuffing is actually quite easy, the only time consuming piece is prepping the ingredients. This is a time when knife skills come into play.

In order for the stuffing to hold together better as a cohesive serving once baked, the ingredients need to be finely diced and minced for the most part. Outside of that though, stuffing is easy peasy to make!

Start by preheating the oven to 350°F and lightly greasing a 9×13″ baking dish.

Once all the vegetables are chopped and minced, heat some of the butter (or ghee) in a large skillet over a medium flame.

Add the onions, celery, fennel and garlic and cook until softened, about 5-7 minutes. Season with salt and pepper.

Add the ground sausage to the pan and brown the meat breaking it up with a spatula as it cooks.

Lastly, add the chestnuts and cranberries and stir to combine. Cook another 2-4 minutes until they’re heated through. Season again to taste with salt and pepper.

Transfer the stuffing mixture to a large mixing bowl. Pour the stock into the bowl with the stuffing and stir to combine.

Gently fold in the toasted cornbread cubes until incorporated then spoon the mixture into the prepared baking dish.

Dot the remaining butter on top of the stuffing and cover loosely with foil.

Bake the chestnut stuffing for 30 minutes then remove the foil and continue baking another 15-20 minutes until the top is golden brown with crispy edges.

Remove from the oven, garnish with additional fresh herbs and serve warm.

WHAT IS CHESTNUT STUFFING MADE OF?

There are obviously a million directions you can go when making chestnut stuffing but for me, this combination of ingredients works incredibly well together.

I actually took a lot of the elements from my tart cherry chestnut stuffed turkey roulade when developing this recipe.

The cornbread brings a rustic feel to the stuffing that complements the chestnuts nicely. I always prefer to make my own croutons or bread for stuffing recipes and either cornbread or a loaf of sourdough are my favorites.

There’s also a delicate play between sweet and savory flavors in this stuffing.

The mushrooms and vegetables are rooted firmly in the savory camp while the cranberries, fennel and even the chestnuts bring a subtle sweetness to the dish.

And of course, there’s the sweet Italian sausage pulling everything together. You’ll notice there’s not a lot of sausage in the recipe, just half a pound and that’s purposeful.

The sausage is there for flavor but it’s not meant to be the star of the show by any means. The chestnuts (which are the only ingredient in a rough chop versus a fine mince) are really what shine in this stuffing.

WHAT GOES WELL WITH CHESTNUTS?

If you’d like to alter some of the ingredients to customize the stuffing, ingredients like cabbage, carrots and even some fruits like apples and pears all go well with chestnuts.

Feel free to tweak the recipe to your liking. A few substitutions here and there will work just fine as stuffing is incredibly forgiving in that way.

I do recommend keeping the cranberries in the recipe for both color and flavor. They’re one of my favorite combinations with chestnuts (even in sweet recipes like these chestnut flour waffles) and their brightness and tart bite is a highlight in this stuffing.

Just stick to the overall quantities and measurements and it will surely come out delicious!

CAN THIS BE STUFFED AND COOKED INSIDE A TURKEY?

If you’re looking for a chestnut stuffing for the turkey, you can definitely use this recipe. Of course, cooking a stuffed turkey will lengthen the time it spends in the oven so just plan accordingly.

The juices from the turkey will further moisten the chestnut stuffing as it cooks and will impart even more flavor.

I imagine this recipe inside this tart cherry cranberry glazed turkey would be amazing!

I personally prefer to keep the stuffing separate from the bird but if your family’s tradition is to stuff it and cook, go for it!

DOES THE CORNBREAD NEED TO BE STALE?

It’s a myth that bread or croutons need to be stale when making stuffing. While the breading should be dried out, it shouldn’t be stale.

Whether making your own cornbread for this chestnut stuffing or using store-bought, the best way to ensure dried out bread is to cut into cubes ahead of time.

If you have the time, spread the cubes out on a baking sheet and let them sit out overnight. Before making the stuffing, bake the cornbread cubes in the oven at 350°F for about 10 minutes.

This perfectly toasts the cornbread so it dries up a bit and can soak up all the good moisture from the stuffing ingredients as well as hold its shape in the stuffing.

DON’T I NEED EGGS FOR STUFFING?

Many stuffing recipes use an egg or two solely to act as a binder. In fact, I’m pretty sure my mom’s recipe does too.

But, since I no longer eat eggs due to sensitivity issues, I decided to play around with just using stock to make this chestnut stuffing and seeing how it held together.

I figured, there’s plenty of vegan stuffing recipes out there that do this so why not?!

As you can see, it’s not necessary to use eggs to make this stuffing (or any stuffing recipe for that matter!). The stuffing holds together just fine from the moisture of the stock and the butter.

That said, if you want to throw an egg in for extra help binding things together, by all means do so. It won’t change the flavor of the recipe at all.

WHAT TO DO WITH LEFTOVER STUFFING

Ah, the best part of any good Thanksgiving meal, the leftovers!

While I always love a good repurposing meal like this leftover Thanksgiving cranberry vegetable sandwich (which is really just a vehicle to eat more cranberry sauce for me!), chestnut stuffing will keep well too in both the refrigerator or freezer.

Store any leftovers in an air-tight container in the fridge for up to a week. Anything you won’t eat in a week can be frozen in a freezer safe container for a couple of months.

Reheat the stuffing using either the oven (covered) or microwave. To keep it moist while reheating, the oven is the best option.

CAN I MAKE THIS IN ADVANCE?

Chestnut stuffing can definitely be made ahead of time!

In fact, doing so helps all the flavors meld together better and leaves one less thing to worry about on Thanksgiving day.

Keeping frozen until baking: Alternatively, you can make this in advance (use the same method as above) and then freeze the stuffing. This is great if you want to get the stuffing out of the way weeks in advance. This approach can be used up to 1 month before baking. Don’t thaw the stuffing before baking. Bake from a frozen state increasing the oven temperature to 400°F. You may need to increase baking time a little to ensure it’s cooked and heated through sufficiently.

HOW DO I KNOW WHEN THE STUFFING IS DONE COOKING?

Since all the stuffing ingredients are cooked in the skillet before transferring to the baking dish and this recipe doesn’t use any eggs, there’s no need to worry about “when” the stuffing is done cooking in the oven.

The sausage is browned and cooked ahead of time, the oven simply bakes it all together.

CAN I USE DRIED HERBS INSTEAD OF FRESH?

I highly recommend fresh herbs for this recipe.

If you’re in a pinch, you can substitute dried rosemary and sage (use about 1/3 of the called for amounts of fresh herbs) but stuffing is really better tasting with fresh herbs so they’re worth seeking out!

HOW TO KEEP STUFFING WARM

Some dishes are ok at room temperature or even cold (like these green beans with bacon, goat cheese and cranberries – another holiday favorite in our family) but stuffing is not one of those dishes!

The good thing is, it’s incredibly forgiving and can be kept in the oven, covered at a low temp (175-200°F) to stay warm while other dishes are prepared.

You don’t need to worry about it overcooking or drying out.

I realize I’m biased but I think this is just the best chestnut stuffing recipe out there!

A bowl of leftover chestnut stuffing with a generous spoonful of cranberry sauce is my absolute favorite “leftover meal” of any holiday, not just Thanksgiving.

I hope you give this recipe a try, it’s wonderful for any holiday meal (does double duty for Christmas too!) and so flavorful it might just become the table favorite in your family.

MORE RECIPES FOR YOUR THANKSGIVING TABLE:

One of my favourite sides at Thanksgiving

Love your recipe and I love every combination to making this perfect stuffing. Presentation picture perfect and festive.

This looks so delicious. Wonderful flavors and so festive. I'm making this for sure.

The recipe was delicious! I didn't have ghee so I used coconut oil, and it came out very yummy! :) thank you!

Such an amazing stuffing recipe! Thanks for sharing!