These spinach and cheddar quinoa cakes with creamy buffalo dip are packed full of healthy quinoa, barley and spinach. Dipped in a cream cheese buffalo sauce, they’re an addictive appetizer or side!

Last week, after 3 years without cable and thinking I got absolutely no channels on my tv, I found out that basic channels (2-13 and a bunch of Spanish channels) actually come through. I won’t get into how dumb I felt for not knowing that or how many nights I wished for a simple episode of Jeopardy to turn on in the background while making dinner so I could scream at the tv when I actually knew an answer (or more correctly, a question). So obviously, I watched hours and hours of news, bad daytime tv and most importantly, the new episode of Scandal last week to make up for the 3 year hiatus. 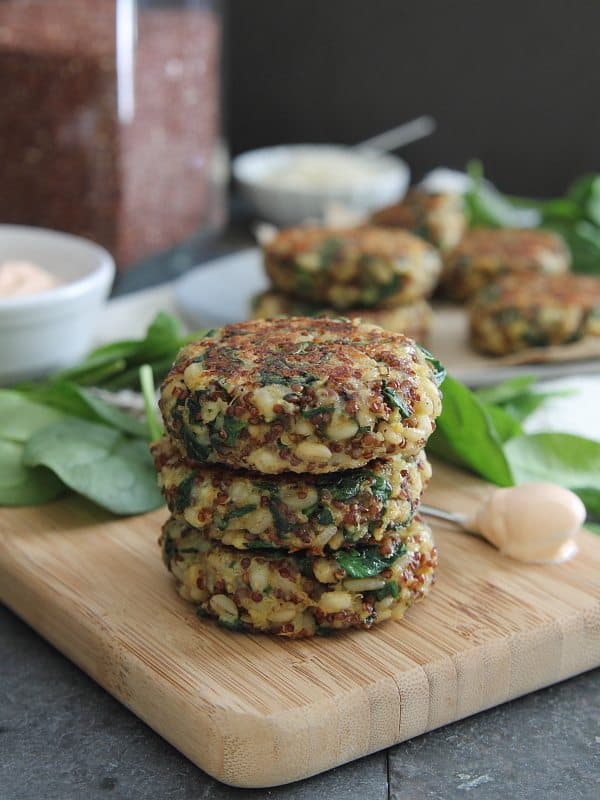 Also, I got to watch the Oscars last night.

Normally, I avoid these celebrity gaga fests like the plague. If there’s anything more obnoxious to me than a bunch of celebs strolling down a red carpet while annoying announcers tell them how great they look and gossip over which designer (who 99.9% the population watching will never be able to afford to wear) did their dress, suit or borrowed jewelery, I honestly can’t think of it. But, 3 years without tv will make you do crazy things and subject yourself to that exact kind of torture.

And so here’s my one observation…

When did getting pregnant before getting married in celebrity world become like the “thing” to do? Seriously, there are way more than just the handful of “exceptions” these days. And yes, I realize how old this makes me sound but it’s not that I disapprove or anything (I really couldn’t care less about the reproductive habits of famous people) I just don’t get it. It’s like, “oh, I can totally make my mind up that I want a kid, but marriage? Ehh, I don’t know…” Um, newsflash people, marriage is reversible, kids aren’t. How is the kid decision an easier one to make than the marriage one?? It takes way less commitment to get married than to have a kid. 18 years from now, your marriage could just be a distant memory and an alimony check but that kid will be making a mess of your house and asking for a quarter million bucks to go to college. 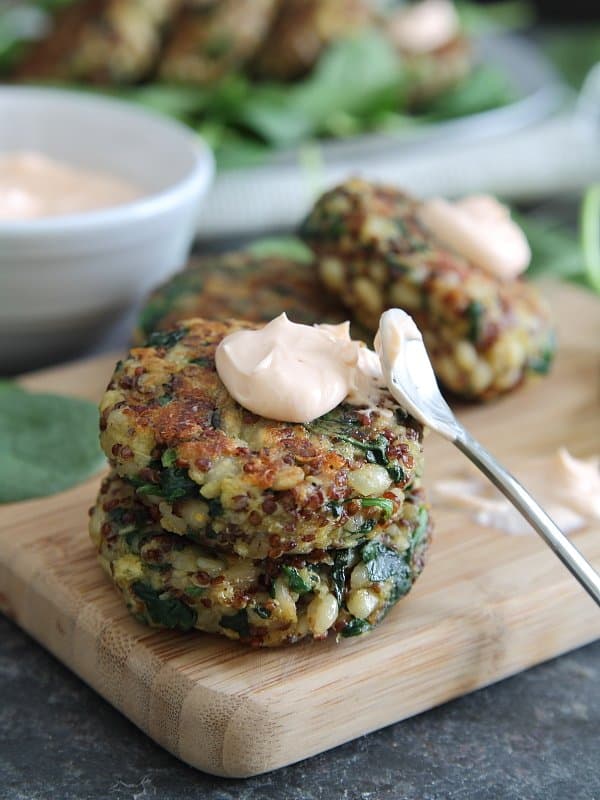 But I’ll stop bitching about pregnant celebrities and talk about these quinoa cakes. No tough decisions to make with these, they’re packed with quinoa, barley, spinach and cheddar, insanely good, only get better with a creamy buffalo dip and way less of a commitment than kids.

For the Creamy Buffalo Dip

For the Creamy Buffalo Dip

Used all barley. No quinoa in the house. Frozen spinach instead of fresh. Out of garlic. Came out fabulously. Thank you!

Yeah !!! now I'll have tasty AND gluten free (if I stick to just quinoa) apps for the football party/ OR cocktail party

I made these the other night, my changes

1/4 cheddar & 1/4 mozz sub barley for Bulgar like Marley did. used frozen spinach but defrosted and squeezed out as much water as I could.

It was delicious! I ended up using a 1/4 c. to portion them out and froze them for the nights I get too busy to cook from scratch.

I pinned these awhile ago, but I'm going to make these tonight for dinner. I'm getting hungry just thinking about them!

[…] 12. Running to the Kitchen | Spinach and Cheddar Quinoa Cakes with Creamy Buffalo Dip […]