This cheesy zucchini quinoa is a great way to sneak in vegetables to a cheesy comforting dish that everyone will love.

Two to three times a week I walk up to the fish counter in my local store and the little Ecuadorian fish man starts unwrapping the salmon before I even have to say anything. Wild Alaskan King is my usual drug of choice. He places a huge piece on the cutting board, looks at me to nod when his knife is above the 3/4-1 lb. mark and I normally do walking away $13-16 poorer within a minute. It’s an efficient transaction. 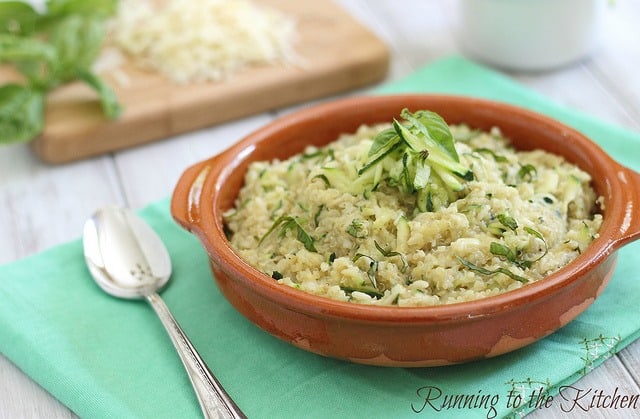 The other day I got to the counter and a man with a shopping cart filled to the absolute brim (something kind of hard to do in this store since it’s a small, mostly just produce and fish kind of place) was in front of me. I can only assume it was 4th of July prep. As I was starring into his cart (it’s like people watching but better) I heard the fish man say the total out loud as if wanting the man’s approval before wrapping it all up…$223+. So of course I looked up to see what the heck he was buying at that price and that’s when I saw a pile of shrimp almost a foot high, each one the size of my hand. They were wild, fresh and since I’d never seen anything like them before, I figured probably a one-time deal. Out with the salmon, in with the shrimp.

Usually, I’m not bothered by shelling shrimp. I have no problem ripping off their little legs because they’re just that…little. Not so much on these guys. It actually brought me close to the verge of gagging while doing it because they were so big it felt like I was really dismantling a body, not a pathetic little bottom feeder. They were worth it though, huge, succulent and awesome on the grill because they were actually big enough not to fall through the slats. 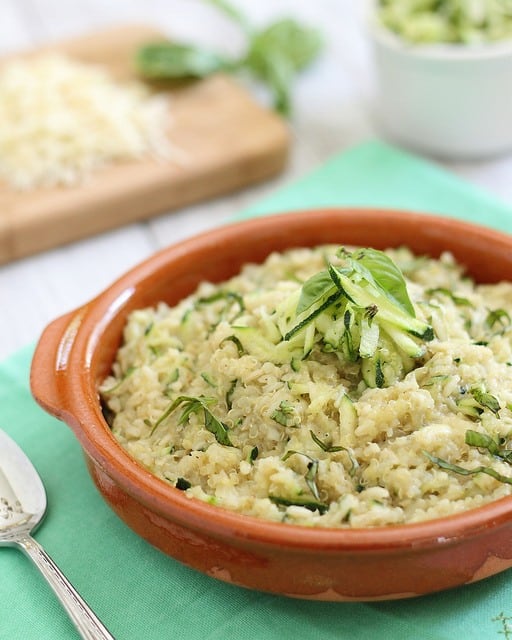 What any of this has to do with cheesy zucchini quinoa is really nothing other than we ate it all together at the same dinner. With shrimp and fresh sweet corn on the grill, I needed one more thing to complete the summer trifecta. Zucchini sounded like the perfect complement.

According to facebook, most of you are quinoa or brown rice obsessed, so I went with both. Part carb, part complete protein superfood, part epitome of summer vegetable, part cheese. Holy yum. 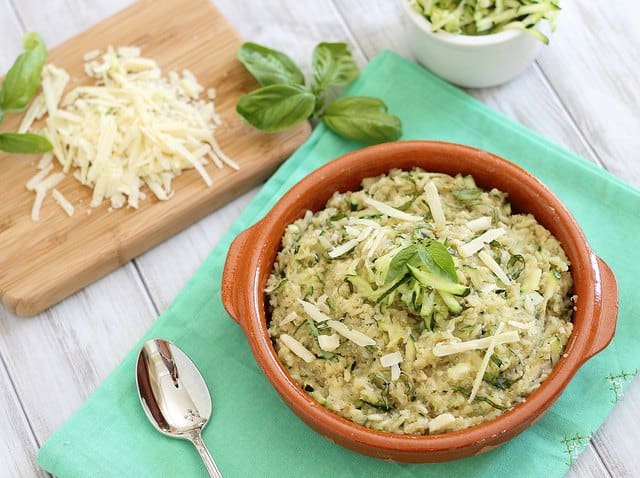 Not a bad way to get your veggies in and forget about jumbo sized shrimp legs.

Delicious recipe, I also added peas for a touch of sweetness which was great and upped the vegetable content. For slightly less mushy quinoa, try cooking then sitting. Good easy-cook method here: www.lovequinoarecipes.com

Tried this last night and LOVED it! It was my husband's first quinoa experience and he raved about it. I've already shared the website and recipe with two co-workers and my sister. Thank you!!! Looking forward to trying a few more recipes.

Oops - forgot to add that I made it with all quinoa instead of the brown rice.