These baked apple crisp rings made with almond meal are a healthier version of the classic dessert. Top with vanilla ice cream for a delicious treat.

Being on the road for the past few days has really made me disturbingly aware of how much I keep myself in a bubble when I’m at home. We have no cable and my internet awareness is whatever I read on twitter, facebook or blogs, all content that I control by the people I choose to follow. God, that makes me sound lame. 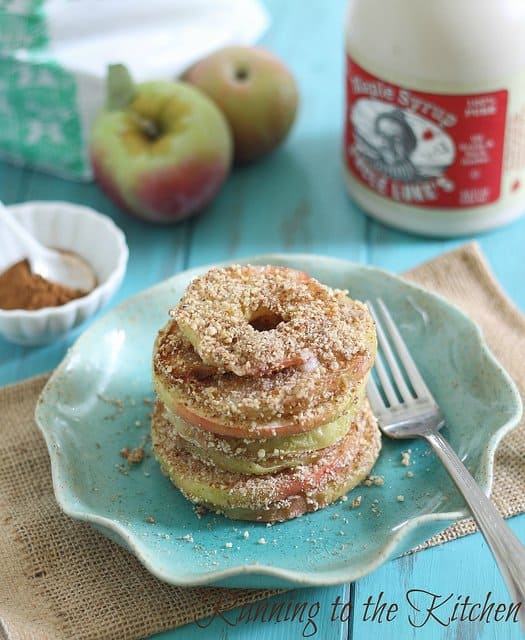 In fact, my decision to move back north when we lived in Florida was about 95% due to me *thinking* I missed the change in seasons, apple cider donuts and pumpkin picking in a real patch while not 90 degrees outside.

However, there are two major downfalls of the season. 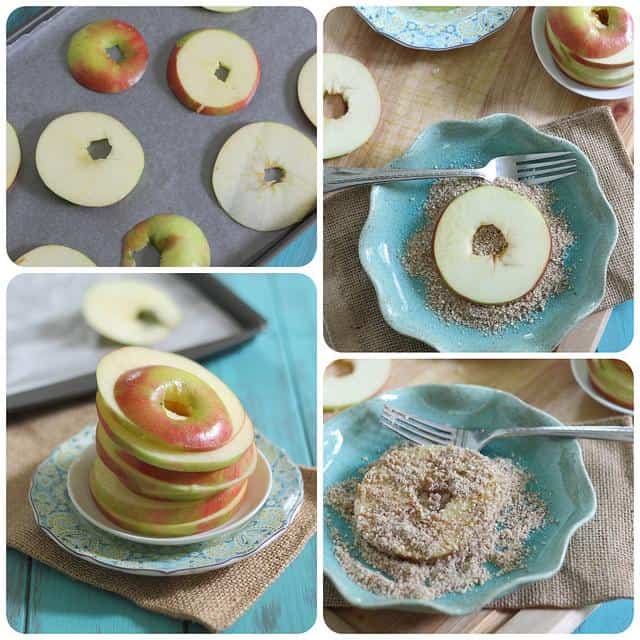 For my thoughts on football, see this post on edamame dip – it’s a little intense.

My thoughts on politics? Glad you asked.

Short story…I cannot stand them. Or at least what they’ve become in this country. 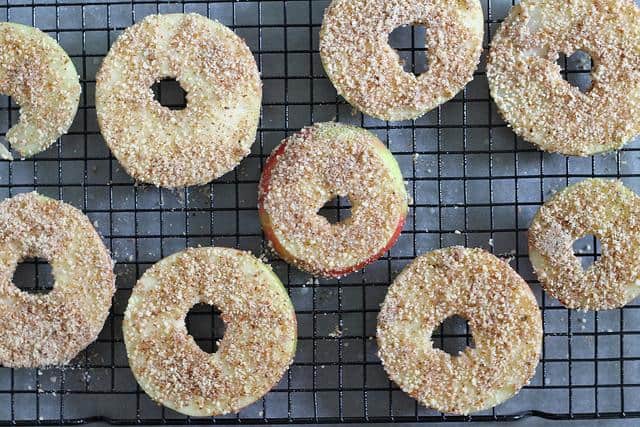 Longer story…The hoopla, and yes, that’s an appropriate word because nothing concrete ever actually gets discussed, drives me nuts.

We turn conventions into freakin’ spectacles where news reporters comment on the dress of the first lady or other stupid trivial things rather than actual issues, we listen to politician after politician say absolutely nothing of substance and instead deliver 1 liners that will bring the already incredibly biased audience in attendance to their feet, clapping every other minute so we can pause, wait for the ruckus to die down and then listen to the next 1 liner and we listen to commercials that attack the opposite party about their past and marital relations rather than state what they actually stand for.

My parents think because of my lack of interest in all this I’m a naïve, liberal (I’m not liberal, but they’re about as Fox News slanted as it gets) youngin’ that is living in some blogging la-la land.

Part of that may be true at times, but naïve I am not.

In truth, I honestly just think this country is so far broken in many of it’s policies and “systems” that it’s beyond fixing. Well let me rephrase that, it’s beyond fixing because the way our electoral system is set up, the American public will never elect a person who is capable of actually making real change.

I do believe those people exist, they just don’t make it on the ticket and even if they did, I don’t believe we have the balls to “hire” them for 4 years. We’re a country that wants everything and yet for the most part, aren’t willing to put in the effort or sacrifice anything so change will never actually happen.

So when I’m forced to listen to and watch pathetically shallow recaps of the democratic convention while eating breakfast at the hotel, getting coffee in line at Starbucks and even when discussing deferred maintenance on a college campus, it makes me want to scream and go back to my bubble.

Because to me, that’s way more interesting and attention worthy than critiquing Michelle Obama’s attire or speculating on why Bill & Hillary are still married.

Tried these last night and loved 'em! Roped the lot with some homemade apple butter and it hit all the right notes.

[…] Almond Apple Crisp Rings are so cute! They are the perfect little things to put in a pretty dish, and grab one while […]

[…] Baked Apple Crisp Rings from Running to the Kitchen […]

wow these sound yummy i absolutely love healthy surprises. i can't believe it's vegan and healthy!!!

We tried these today. They taste great, look great...but they were soggy, not at all crispy. :( Did I do something wrong?

Hi Karissa- the apple itself will be soft, the outside coating should be crispy though. Slicing the apples thinner will keep them crispier. You can broil at the end for a bit longer to try and crisp them up a bit more.