This Shamrock shake copycat recipe is a healthy, all real ingredient version of McDonald’s shamrock shake you can feel much better about drinking!

*This post was originally published 3/6/2012. It’s been updated with new photography and a video on how to make this healthier copycat version of McDonald’s famous shamrock shake. Some text is original.

Sunday afternoon Ulysses, Ginger and I went for a run on the bike trail near our house.

As we were walking onto the trail from the parking lot, a family of 4 was coming off the trail headed to their car when all of a sudden the little kid on his scooter screams “AND I CAN GET AN EGG MCMUFFIN TOO?!”

Ulysses and I just turned to each other and burst out laughing.

There’s a McDonald’s not even a quarter mile from the bike trail parking lot (irony at it’s best) so I guess that family’s Sunday afternoon plans involved some exercise and then erasing any and all strides they had made with that effort at the good ole golden arches with everyone’s favorite March treat, the Shamrock Shake.

People rave about these disturbingly fake green shake concoctions every year around St. Patrick’s Day and after trying one out of pure curiosity, I honestly can’t say I understand the hype. 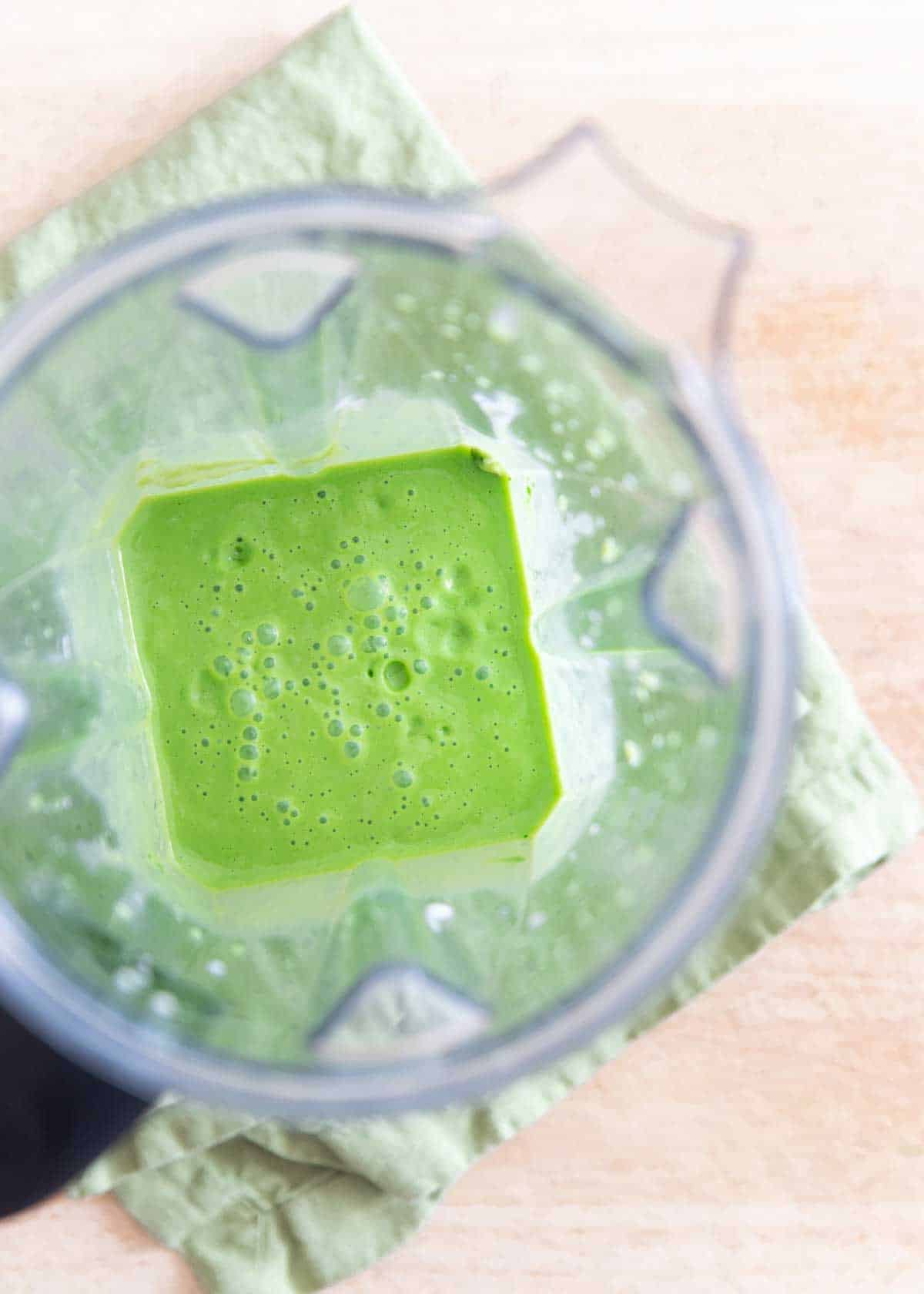 A shamrock shake basically just tastes like a vanilla milkshake with some fake mint thrown in.

I truly think its seasonality (aka: short availability during the year) is the main reason for the cult like following this green drink has. It’s really nothing crazy special in my opinion.

But, it’s definitely not the first time I’ve gone against the crowd when it comes to food choices.

So, I decided to play around at home and try and recreate this green wonder.

Except of course, in a healthier, more “real-food” kind of way.

The result is what I’m calling a healthy shamrock shake. You could easily called it a shamrock smoothie too. To be fair, it’s more smoothie than shake but hey, semantics.

Let’s break this shamrock shake thing down, shall we?

When Is The Shamrock Shake Available?

I’m pretty sure McDonald’s likes to keep this a secret to preserve the hype but if using years past is any indication of the future, the shamrock shake usually becomes available mid-late February and runs through St. Patrick’s Day.

And believe me, 3-4 weeks of this thing is plenty.

Well, let’s go over the ingredients McDonald’s uses in their version. 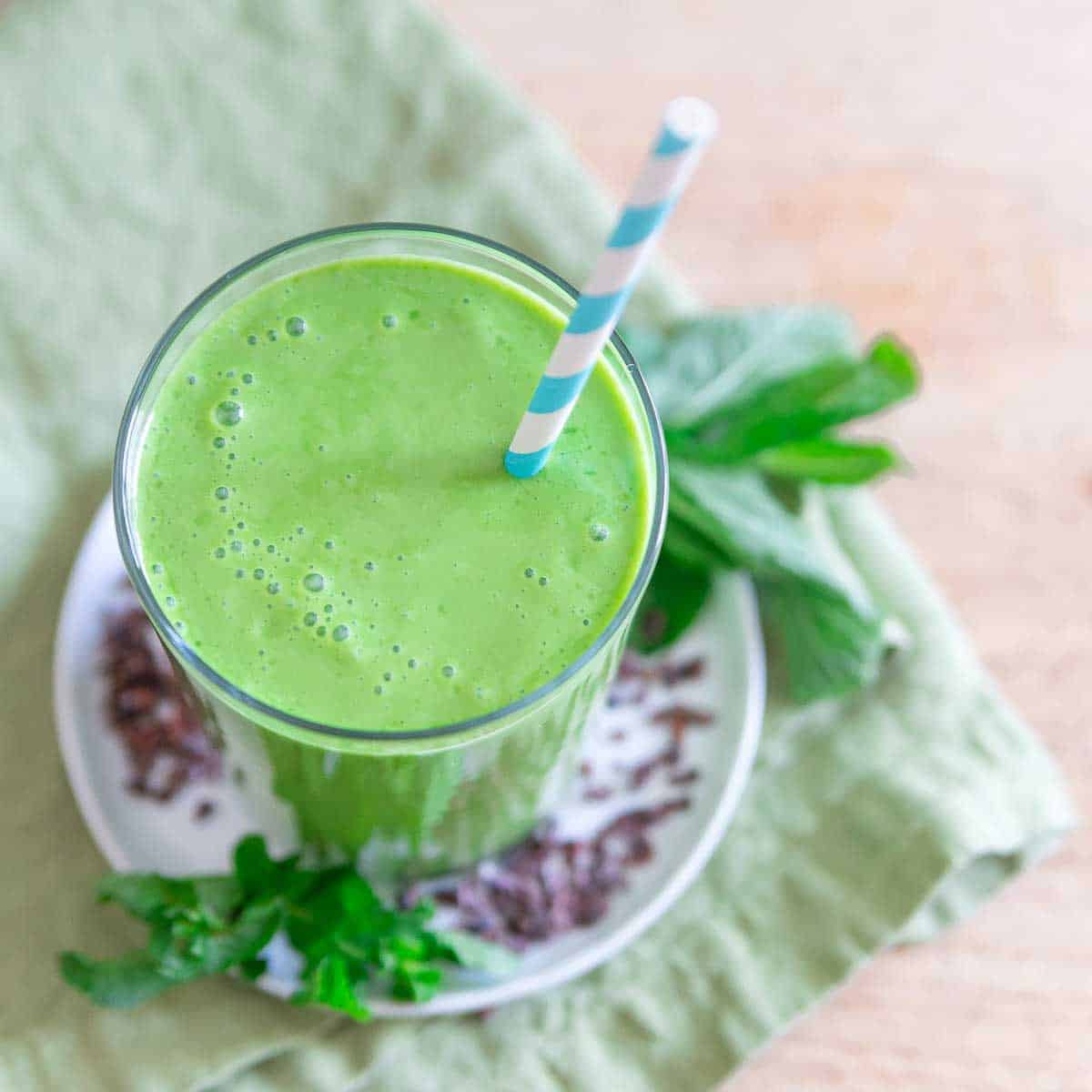 According to McDonald’s, there are 4 main ingredients in the holiday shake:

I don’t know about you, but the vague “shamrock shake syrup” disturbs me a little. As does most food at McDonalds though I guess.

I will say this though, the origin of the shamrock shake is pretty cool.

Apparently a franchise owner in the 70s came up with the recipe as a festive way to celebrate St. Patrick’s Day. It was originally called the “St. Patrick’s Day Shake” before being renamed to its catchier current title.

From what I understand, proceeds (or part of them) from the sale of shamrock shakes used to go to the Ronald McDonald Foundation as well (not sure they do any longer). 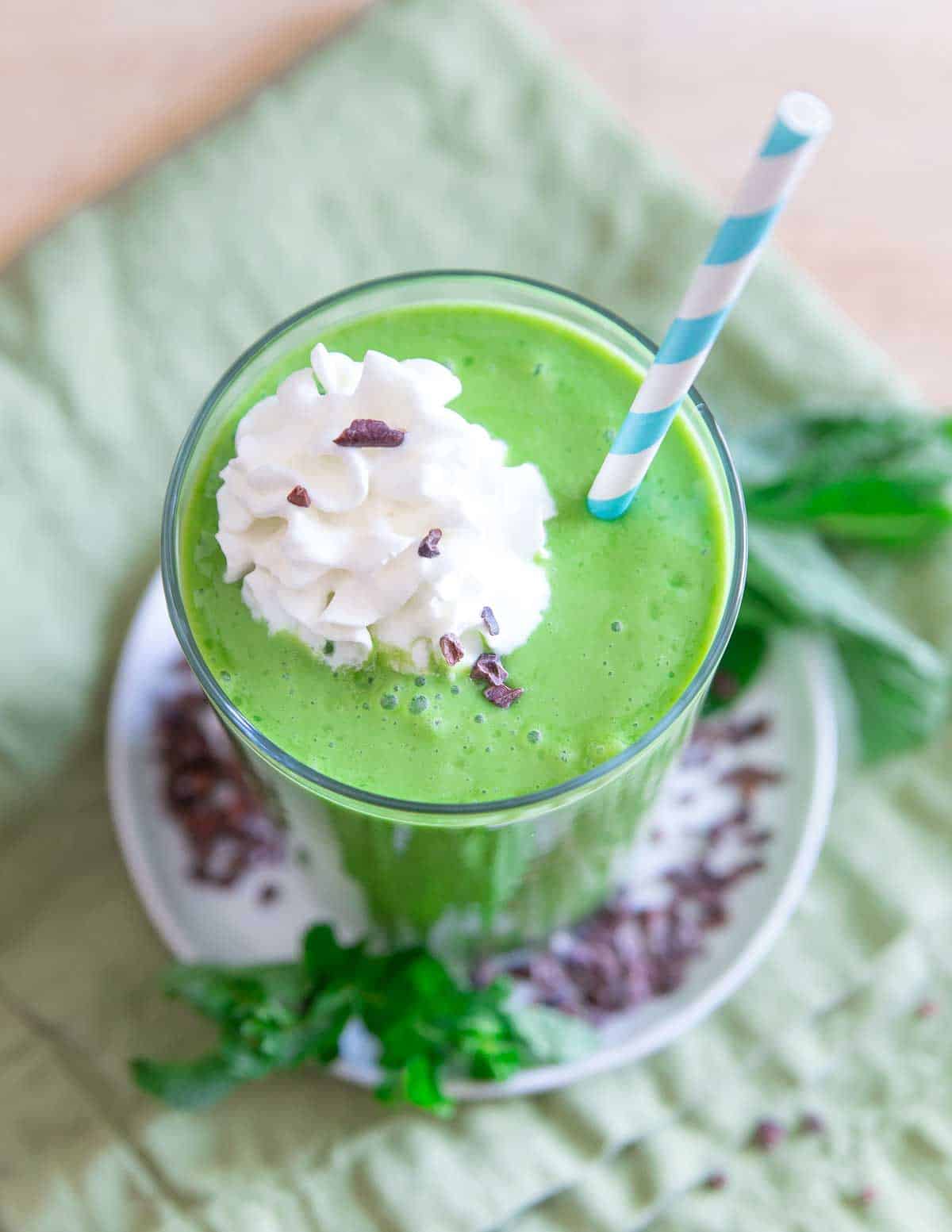 What’s In This Healthy Shamrock Shake?

So in a quest to mimic whatever the shamrock shake syrup does to turn a vanilla ice cream base into a pale green concoction that looks like a leprechaun died in the cup only this time with ingredients we can all understand and no food dyes (food dyes are such a pet peeve of mine – don’t even get me started on “red velvet” baked goods), I came up with an ingredient list like this:

The result is a sweet minty shake that borders on the line of smoothie.

Although, if you wanted it to be more shake like and turn this into more of a treat/dessert, replacing the Greek yogurt with vanilla ice cream would be perfect. Or even, matcha mint chocolate chunk ice cream! Don’t miss this Baileys ice cream either, it’s the perfect boozy way to celebrate St. Patrick’s day if shakes aren’t your thing.

I used to eat maraschino cherries by the handful when I worked in a restaurant in high school and college but these days, they’re just not something I keep in the house. By all means though, throw one on top for the full shamrock shake effect if you like.

So if you’re someone who loves the tradition of this green shake around St. Patrick’s Day but maybe you’re looking to keep the calories in check, I encourage you to give this healthier shamrock shake a try.

I think it does a great job of capturing that creamy vanilla milkshake like texture with the minty fresh taste of the original just in a way you can feel good about drinking while saving yourself some calories and the annoyance of the drive through line!

And if you want more green food recipes to celebrate St. Patrick’s Day without all the fake ingredients, try green oatmeal!

If you want it more of a shake consistency/taste, substitute vanilla ice cream for the Greek yogurt.

[…] Irish posts (here and here), I found this deliciously simple Shamrock Shake recipe from Running To The Kitchen's blog. This shake was all sorts of amazing! I can assure you that I plan on making this again […]

I didn't make the simple syrup - I was too impatient! I looked at all the ingredients, threw them in a blender (although I did combine the honey in some hot water first so it wouldn't be clumpy) and drank it. Delicious! Will be repeating.

BTW - it tastes nothing like a shamrock shake, this is way better! REAL, not fake. :)

Ah I can almost taste the mint deliciousness

you did nailed it! it looks delicious

I've never had one either, and it always seemed strange to me. *This*, however, sounds pretty good!