AS AN AMAZON ASSOCIATE I EARN FROM QUALIFYING PURCHASES
4 shares 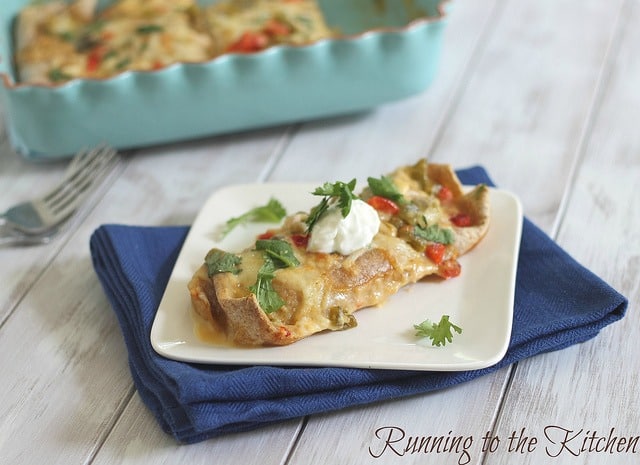 We’re back! I feel like the two week hiatus between PW Wednesdays are like one long commercial break and we need an announcer in the background saying “stay tuned for what crazy (loaded with cream, butter and other fat) kind of dish will they will be making next!”

Well, the wait is over. We’ve got white chicken enchiladas on the menu today thanks to Tina. 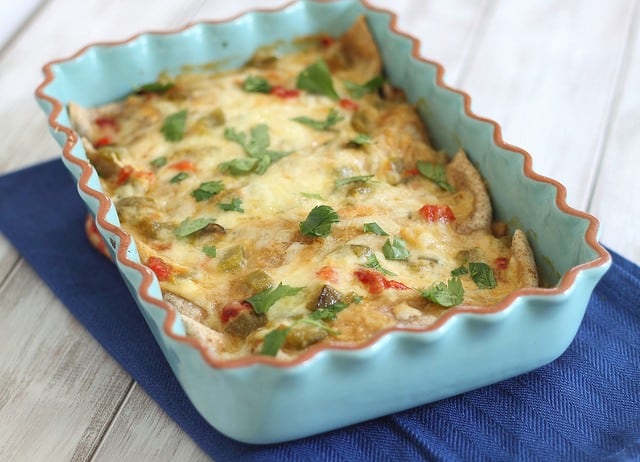 Honestly, this dish was a bitch to make. Good thing it was tasty. Super tasty. Like really good even after sitting around for 6 hours tasty (welcome to the life of a food blogger forever chasing natural light and making husbands eat mushy food hours later). It’s one of those dishes that leaves your kitchen a disaster zone no matter how much you try to clean as you go.

Step 1: make and shred chicken (30 minutes in and of itself)

Step 2: roast peppers, suffocate them in a plastic bag, peel their skins off and chop them (another 45 minutes)

See what I mean? It’s a time consuming bitch.

I even made the chicken and roasted the peppers the day before I made this to save some time and it was still time consuming and transformed my kitchen into a hot mess.

Per usual, Ree’s ingredient quantities are totally overkill. To feed 8, it calls for no less than 1 1/2 cups heavy cream, 1 cup sour cream, 1/2 stick of butter and 2 1/2 cups of cheese.

Also per usual, I didn’t follow directions. It’s a recurring theme in my life.

I halved the recipe and then even further reduced certain items and/or substituted them entirely (mostly those fatty ones above). The result was a super spicy (I used serrano peppers in my mix which are a bit hotter than your typical jalapeno), perfectly creamy (without being overkill) and cheesy chicken enchilada. Besides my beloved carnitas, this is probably my favorite recipe we’ve done so far. 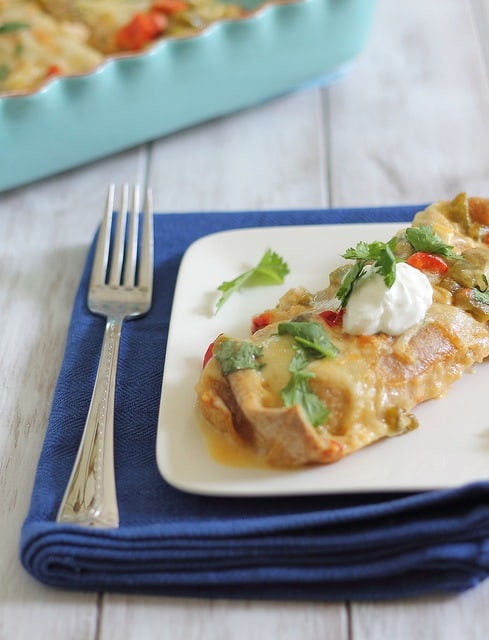 I’m learning to look at this book as more of a guideline than an actual recipe because it’s got some great ideas, it’s just that the execution is usually either off or not my cup of tea (read excessively fattening).

Although, one thing I’ve got to hand it to Ree on is making incredibly photogenic dishes. I swear her food just “pops” on the screen and usually makes me (like right now) wish I was eating it again even though it’s 11pm at night and I’m still stuffed from dinner.

For the recipe to these bad boys check out Tina’s blog.

Megan- Wanna be a Country Cleaver

Missed some of the previous PW Wednesday posts? Search no more…

[...] that I’d call good. I would make all but 1 of these again and that’s not because the 1 (enchiladas) were bad, but because they were just too time consuming and more of a mess than I’m willing [...]

[...] sure to check out what the other girls thought of this recipe: Running To The Kitchen Wanna Be A Country Cleaver Table For Two [...]