Posted on Published: May 16, 2012 Categories Breakfast

AS AN AMAZON ASSOCIATE I EARN FROM QUALIFYING PURCHASES
7 shares 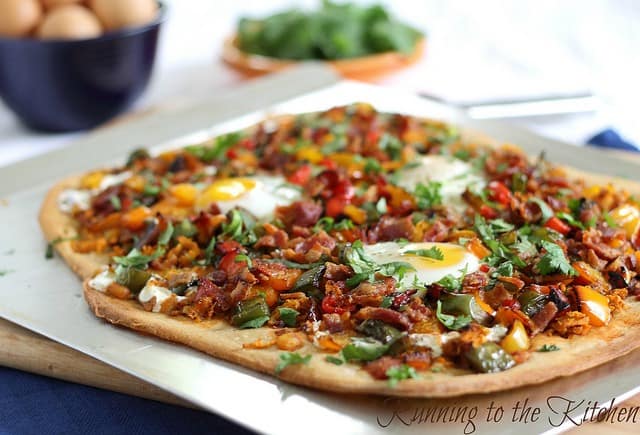 PW Wednesday is back! And looky, looky more pizza.

Rachel had this week’s pick and I think she was a little nervous about picking another pizza. I was more than ok with it though after the heavenly carnitas one which I can only describe as an out of body experience with every single bite. Seriously, I’m still dreaming of that meat.

The last PW post got a disclaimer upfront about using ridiculous cringe worthy words, this one gets one for the inundation of photos. I’m sorry, breakfast pizza really loved the camera and I just couldn’t choose. It was like picking a favorite child and since my mom tells me that’s impossible (totally don’t buy that btw…you moms just say it so you don’t look bad), so too was this. 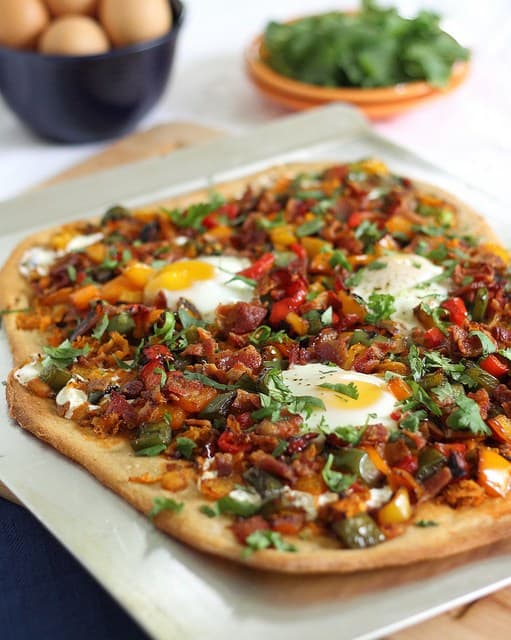 So, let’s discuss this recipe. As with many of Ree’s recipes, there were some ingredients I wasn’t too psyched about using or just questioned in general:

1. frozen hashbrowns. I don’t usually buy things from the frozen aisle unless it’s a. green veggies b. frozen waffles or c. ice cream. Frozen hashbrowns fall into that sketchy area of weirdly packaged/processed/not so sure what’s in it but probably more butter than necessary kind of food. Not my thang. So I used sweet potatoes that I had on hand, grated them (by hand because that attachment scares me on my food processor) and made my own hashbrowns.

2. 1 lb. of bacon. Ok, I love me some bacon just as much as the rest of the world but 1lb. on a pizza?! A pizza that already has frozen hashbrowns, a ton of peppers, cheese and what was supposed to be 8 eggs? I just found that a bit excessive. I think you can see from the pictures the pizza does not look skimpy on the bacon. That was using 5 slices. Less than half a pound. Ree could maybe use a lesson in moderation?

3. 8 eggs. I have nothing against eggs. Love ’em, eat them multiple times a week yolks and all, but had I tried to crack 8 on here you wouldn’t have been able to see the actual pizza. Also, this ended up serving 2 of us for dinner. We probably ate a bit more than a serving size each so maybe it could’ve served 3 if we weren’t such animals, but not 8 like stated. 8 eggs for 2 people would’ve also been a bit much. 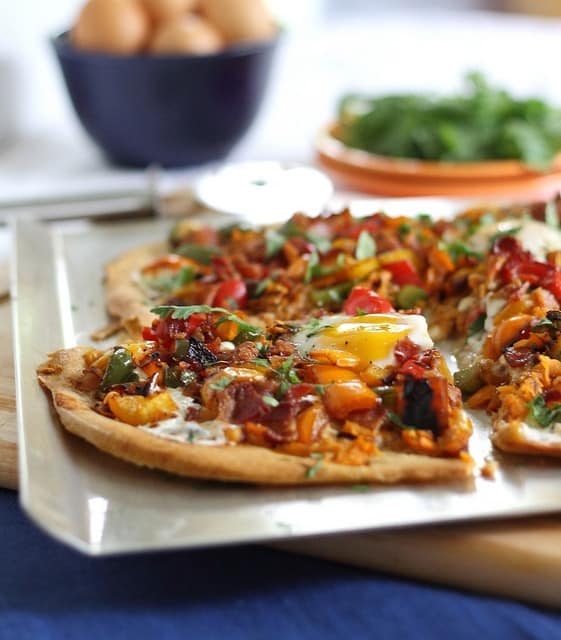 Consider that stuff the “bad”.

The good was plentiful too though.

1. The colors. They say you should eat a rainbow. This is a rainbow that I can sure as heck enjoy eating. Pretty food tastes better. Fact.

3. Depth of flavor. While the meat on the carnitas pizza last week made me swoon with it’s pineapple juiciness, that was pretty much the best part of that pizza. This one had so many flavors going on that you tasted something different with each bite. From the gooey mozzarella to the sweet potatoes to the sweet peppers (sauteed in bacon grease ;)) to the crispy, salty bacon and finally the freshness of cilantro. There was a lot going on on top of this pizza and my mouth was happy enjoying it with every bite.

4. The crust. I have to retract my previous statement saying the pizza dough came out weird because I used the same exact recipe (in the book as well) this time and it came out perfectly. It must have been my (expired) yeast last time. I’m also now blaming that on the patheticness of my crust rolling skills. 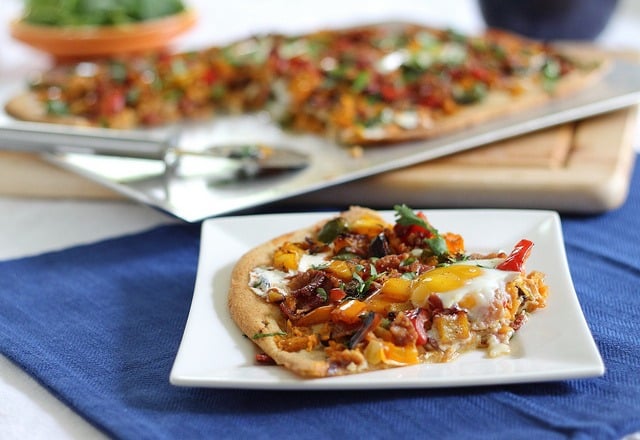 As you can probably see from that picture, I found it really hard to get the crust crispy in the middle. No fault of the crust, there was just a ton of stuff on top of it. It didn’t really bother me, but a fork was definitely needed to eat parts of it.

All in all, another delicious choice (with a few modifications).

Oh and just one more…. 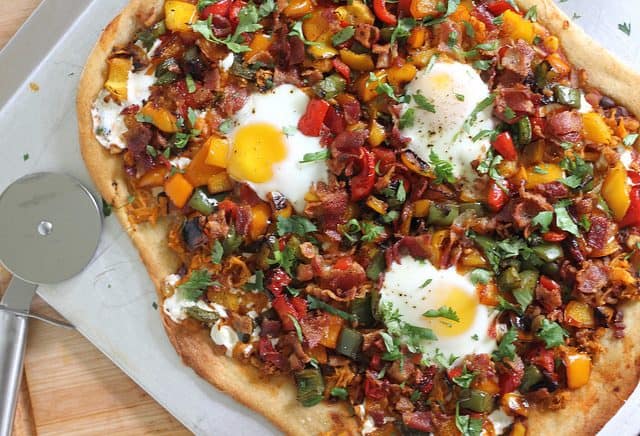 Megan – Wanna Be a Country Cleaver

Other posts in the PW Wednesday series: 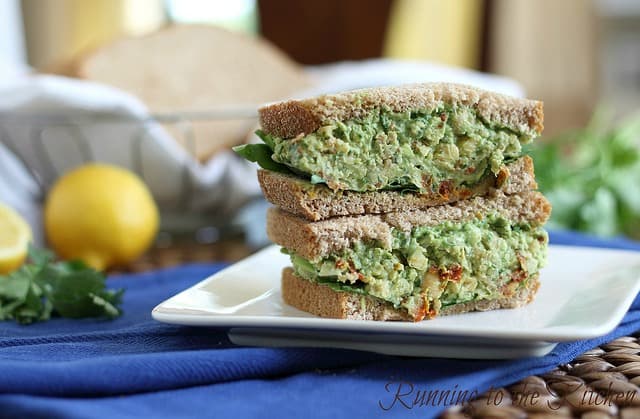 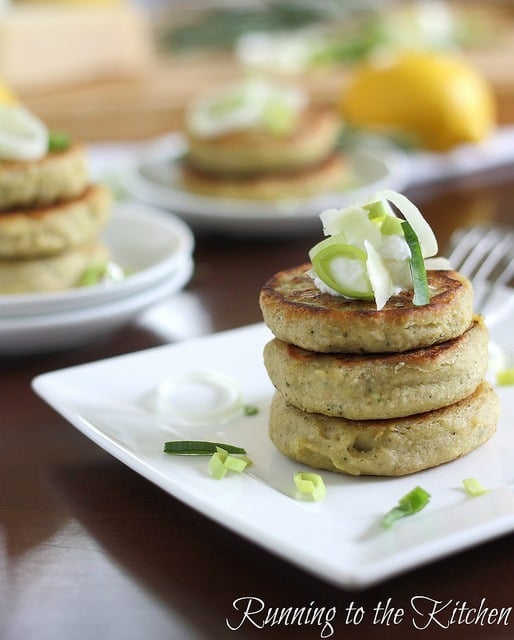 […] go on over and grab it!! Don’t forget to check out every one else’s delicious creation! Gina, Megan, and […]

[…] I made that crust. I’ve become a homemade pizza crust convert since our PW experiences and it makes me so damn proud every time now. Just thought you should […]