It’s been about a month since I last talked about my workouts and how Bodyrock was going since starting it in early February so I figured I’d do some recaps and progress reports today. Also, I’m sort of ADD with my workouts so I’ll tell you what I’m thinking is next…

First of all, Bodyrock is awesome. I can’t stress enough how easy it is to have a free resource online for intense 15-25 minute workouts. For the past month I’ve been cycling through new Bodyrock workouts they’ve been posting and ZWOWs, mainly this one and this one with about 2 days of running per week (3-4 miles at a time). Earlier this week I took the fit test (where you do as many reps as possible for 50 seconds with a 10 second rest between each exercise) for the 4th time and here’s what the numbers say.

*I did pushup burpees on 2/20 instead of regular ones by accident, hence the lower number.

I loved having the fit test to measure progress and I’m pretty happy with those results. My biggest improvement, although the numbers don’t really reflect it, is pushups. Some of those 25 and 26 in the first two tests were on my knees. The last two tests were not. I’ve always felt super weak in that exercise in the past and now I finally feel like I’ve got some legit strength in my arms. On top of whatever workout I was doing each day, I’d throw in 50-100 pushups (broken up) and it definitely paid off.

I had some pictures in my camera since the end of New Rules of Lifting For Women which I got through stage 4 of back in the late fall/early winter so I took some earlier this week to compare. They’re not true “before Bodyrock” pictures, but pretty close. Also, I’d like to imagine that I’ll be that tan again sometime soon… 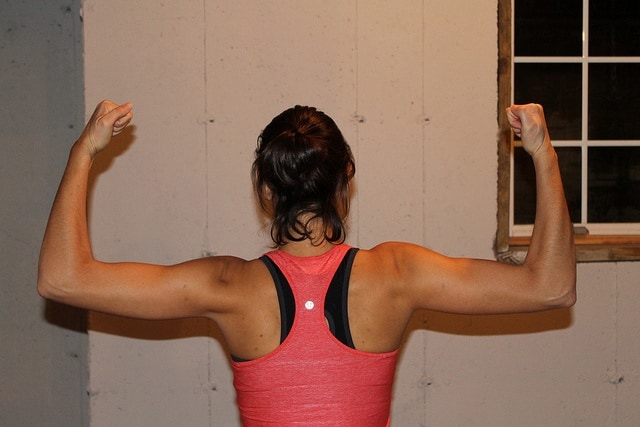 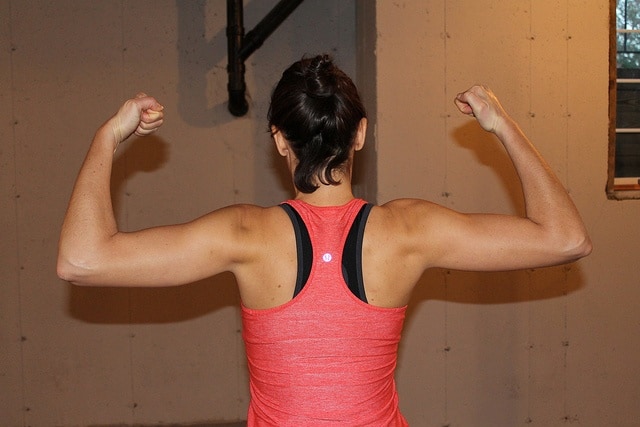 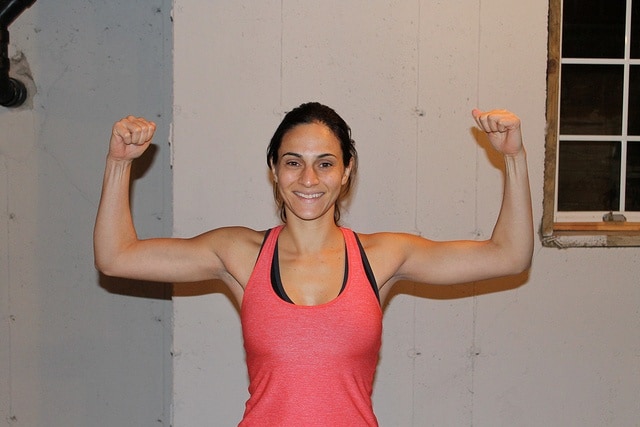 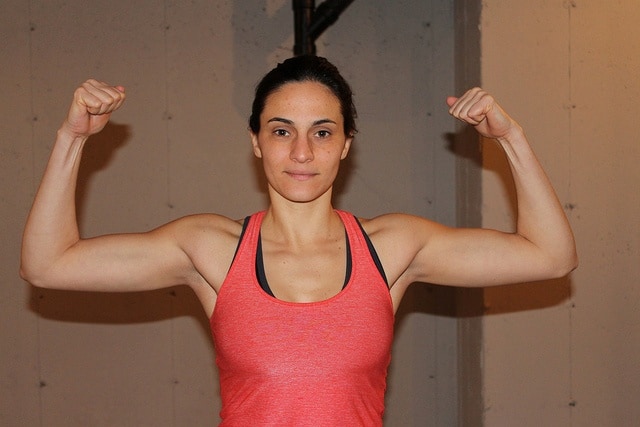 My arms and shoulders definitely look bigger/bulkier to me but not necessarily more “defined”. I didn’t have leg or ab pictures but to be honest, they don’t really look that much different. Proof is in those fit test numbers though, I’m stronger and better conditioned and therefore, I’m happy.

I don’t necessarily want to completely give up Bodyrock, but I’ve decided to start Jamie Eason’s Livefit Trainer this week. After reading Janetha and Monika’s reviews of the program, I’m feeling pretty stoked about the possibilities of it. I’ll be honest (and vain) and say I wouldn’t mind looking like either of them after the 12 weeks.

The program assumes you’re working out in a gym and therefore has many exercises utilizing either cables or machines. Luckily, bodybuilding.com has a video of every single exercise in the program and it gives you 3 related exercises for each one. 95% of the time I’m able to find a barbell or dumbbell alternative that I can make work in my home gym (<–throw back to my first week blogging!). I’m also lucky in that I have a small corner home gym that has some basic stuff like a leg press, pull down bar, etc. so I think I can make this program work without having to join a gym, something I’m not willing to do.

Phase 1 has absolutely no cardio in it (the theory of which is explained on the website) and I’ll be honest in saying that I’m skeptical of that part. So far I haven’t run at all but I’ve thrown in long walks with the dog to make myself feel like I’m at least doing something. I’m very nervous about potentially losing my running conditioning and knowing how hard it is to build up a base, I really don’t want that to happen. Cardio kicks back in the program after week 4, but I might cave and do at least a 3 mile run once a week in phase 1. I feel like that’s enough to “keep up” my running at the most minimal level but not enough to alter the program’s intentions. Another option is a cardio intense bodyrock workout instead of running. Also, there are 2-3 days of rest in each week of phase 1 and I really don’t see myself needing that much. After 3 days of lifting this week, I’m slightly sore (you’re supposed to be giving it a 60% max effort on weights this week) but not enough to need 3 days of rest.

I’d love to hear thoughts on the whole cardio part in phase 1, especially from anyone that’s done the program!

So that’s the plan and hopefully I’m sticking to it.

On the diet side, I’m not really following her suggestions to a tee (I eat healthy enough as is) but I am trying to eat smaller meals more frequently and be a little more conscious of my protein intake. Protein builds muscles and muscles are goooood.

In light of that, this smoothie happened yesterday afternoon. 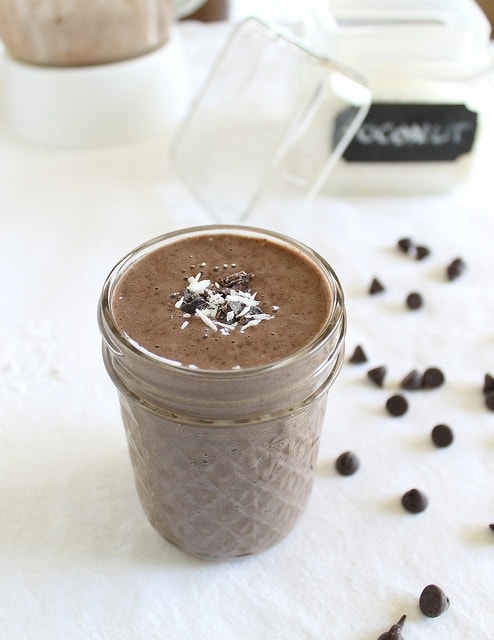 Seriously, Katie is on point this week with the snacks. First the coconut lemon balls and now this. One of the best chocolate shakes I’ve ever had and it’s high in protein. 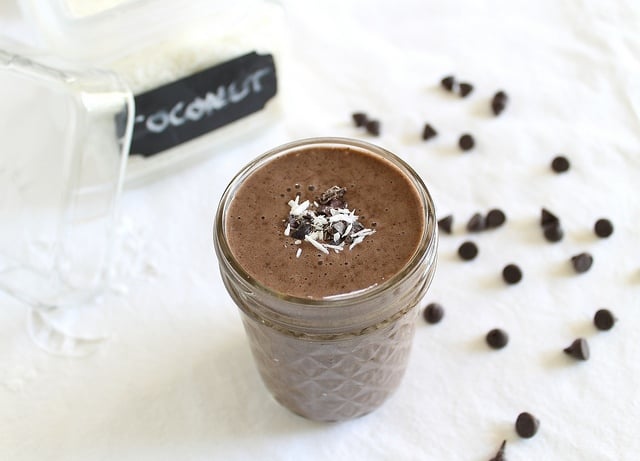 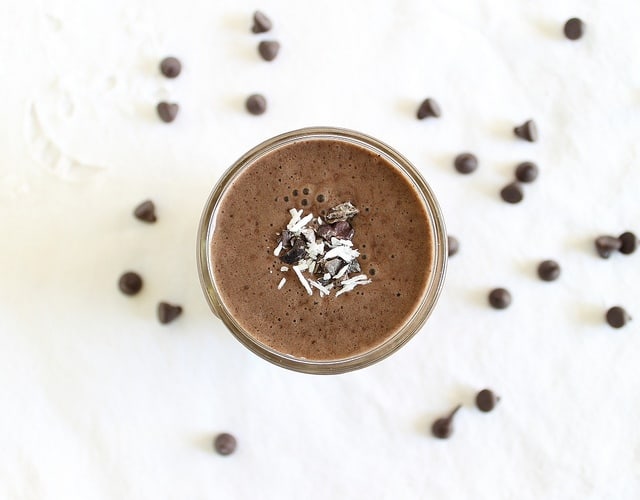 I used carton coconut milk and cacao nibs on top, otherwise it’s the same as her recipe.

Bonus points if you drink it out of a cute jar.

Anyone else doing the Livefit Trainer out there? I’d love to hear thoughts on the program!

[...] to the KitchenLivefit trainer phase 1 recap & reviewApril 26, 2012Just less than a month ago I started Jamie Eason’s Livefit trainer program which is broken down into 3 phases, 4 weeks each. [...]

[...] clean eating diet, I’m really not sure why it took me so long to jump on this bandwagon. I finish phase 1 of the Livefit Trainer tomorrow and I can honestly say I’ve eaten some of the best tasting foods in the past 4 weeks [...]

I'm contemplating the LiveFit plan but I don't think I could give up cardio. There's just no way it would work for me. I might just do 30 min of cardio and her weight program and see what happens.

I am just finishing up with Jamie Eason's LiveFit program! I have really loved Phase 3, so stick with it!! The first phase was hard for me too and I ended up just making 1 rest day in place of the 2/3 and just getting through it a week or so faster and on to the good stuff! I'm not much of a fan of cardio/running, so it was no painful for me to drop the cardio for a bit. I feel like the program is really for fitness beginnners and running once a week is not going to hinder your ability to build muscle, I think it's just to try and get newbies accustomed to the workout style. I tailored the workouts to my liking to some degree in all of the phases, for instance, I build muscle really quickly in my chest and I noticed my boobies were shrinking rapidly in phase 2, so I took the chest days down a notch to avoid overworking that muscle group. Hope this helps!! Love your blog!

[...] jokingly).He’s partially right, I am a bit more “into” protein recently since starting the Livefit trainer program but I’m not just downing buckets of cottage cheese or anything. I’d like to actually enjoy that [...]