I’ve been wanting to get a bike for awhile now but, over the past 3 weeks it grew to an obsession really and when I get obsessed with something it usually ends up in a purchase. Yesterday was no different.

I spent one final morning perusing craigslist hoping to find a cheaper, lightly used version of what I was looking for to no avail so to bike store I went!

Except, it was closed. Seriously? Why would the bike store not be open on a Sunday? Isn’t that like the prime day of leisure for people to purchase things like bikes? 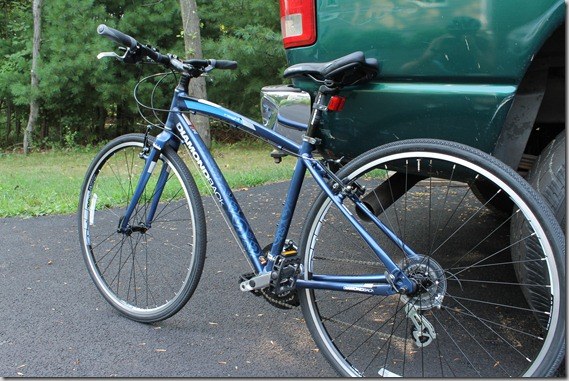 Luckily, we live in America, home of chain stores galore and places like Dick’s are open on Sundays. Could I have gotten a better bike at an actual bike store? Yes. Would the person there actually pay attention to me and help me unlike the lovely 16 year old in the bike department of Dick’s? Yes. Would I have paid at least $200 more? Also, yes. So, for what I was looking for (I don’t plan on signing up for any triathlons tomorrow or anything) this was perfect.

I was actually still vacillating between a road bike and a hybrid when I walked into the store but, soon found out they don’t actually sell the road bikes in the store so my mind was made up pretty quickly. I think the hybrid is actually the better option for me anyway. I’m just not a rounded handlebar type of gal. 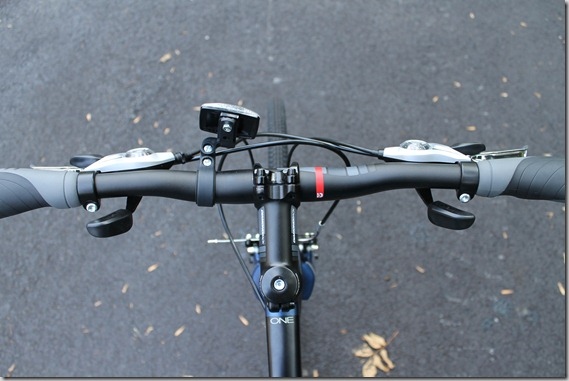 Ginger was skeptical, running around barking and snapping at the bike. 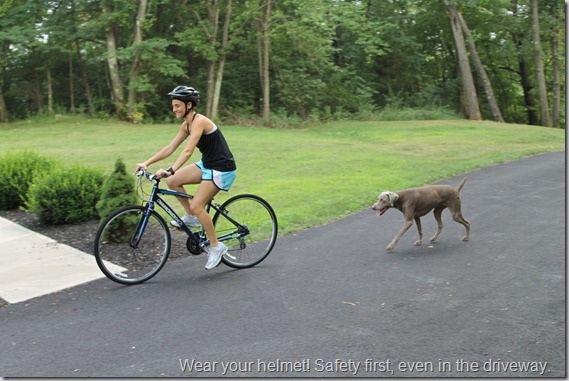 When she was a puppy and we lived in Florida, she would whine constantly at night. Like, the entire night. No joke. At the time, we thought it was just because she had a ridiculous amount of energy, as weimaraners are kind of known for that. So, we would take her out, leashed up and ride her around the gated community we lived in at all hours of the night in an attempt to tire her out thinking that was the issue. Well, turns out when we moved to NY and actually let her sleep near us (in Florida we kept her in the kitchen, not near our bedroom) the whining stopped. Ever since, she’s had a “thing” about bikes. Gee, I wonder why? Poor thing just had separation anxiety!

That is why I shouldn’t be allowed to procreate. Crying baby? Maybe it just needs some exercise!? Strap it to the bike Ulys!

Of course I had to take baby blue for a spin so I headed out from my house to the bike trail which is exactly 2 miles away and rode a short section of it. The sky looked like it was about to open up at any moment so I didn’t go far. All in all, 8.5 miles in just under 40 minutes. 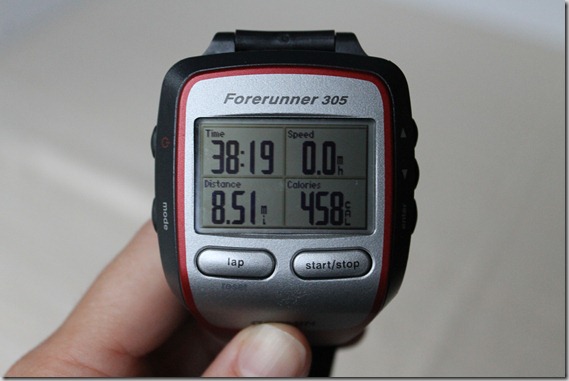 It was so fun testing my Garmin out on something other than running! I finally feel like I can relate to all the bloggers that post about their bike rides now. Before, I had no concept of what 14mph on a bike felt like. Now I do! I think my average pace was somewhere in the high 13’s. I’m so excited to have this for cross training days. Since I don’t belong to a gym, my cross training options were pretty limited before. It will also be nice to take to the beach next week! Only 6 more days… 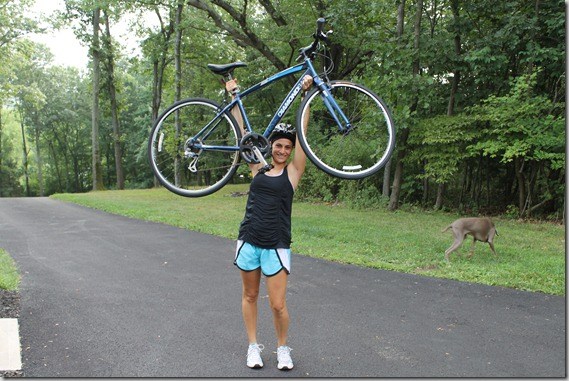 I’ve noticed I wear these shorts a lot on the blog. I swear I have others. Why am I holding the bike in the air? Not really sure, it just seemed cool at the time.

Tell me, do you have a bike?

Ride it for a workout, leisure, race with it?

Do you know how to change a bike tire? I’m kind of petrified of having any issues while riding, I haven’t the slightest idea how to fix anything on a bike. I guess running is kind of nice in that regard. No equipment to break on you!

[...] If it does this rain bs again, it’s over. We will have officially broken up. But for now, the bikes are hitched on the car, the bags are packed and I’m soon going to be reunited with my second [...]

[...] up my training plan on Tuesday since it was pouring outside, I was excited to get in my first real bike ride with blue yesterday. I figured since I biked 8 miles on Sunday that I would shoot for 10-12 and see how I [...]

"Strap it to the bike Ulys!" That's totally what Mike and I would do! When Bungee was having crazy separation anxiety, we would spend so much time exercising her. Once we spent the entire day, walking, running, and hiking with her and even after 12 miles she was still a nutbag. Turned out she was claustrophobic and couldn't handle being crated...thanks adoption people for telling us she was crate trained.