This arugula walnut pesto is also vegan with the addition of nutritional yeast instead of parmesan. It’s a fresh, delicious addition to any pasta. 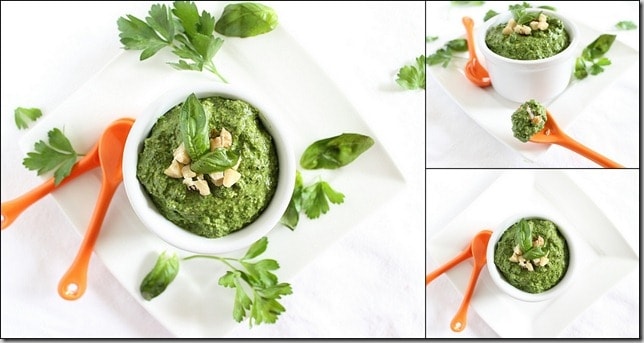 This is why I could never be a “life casting” blogger… I’ve got absolutely nothing to say to open this post that starts with my breakfast from yesterday. Nada.

So instead, let me update you on my spud finding pup. As if bringing a potato inside wasn’t weird enough last week, guess what she came back with yesterday?

I’m seriously starting to wonder about the neighbors. Are they just chucking random food items outside of their house? On a mission to make my dog fat? Trying to save me from buying dog food? I’m perplexed, Ginger’s never been happier.

On to more normal things… like breakfast. From my kitchen, not my neighbor’s yard. 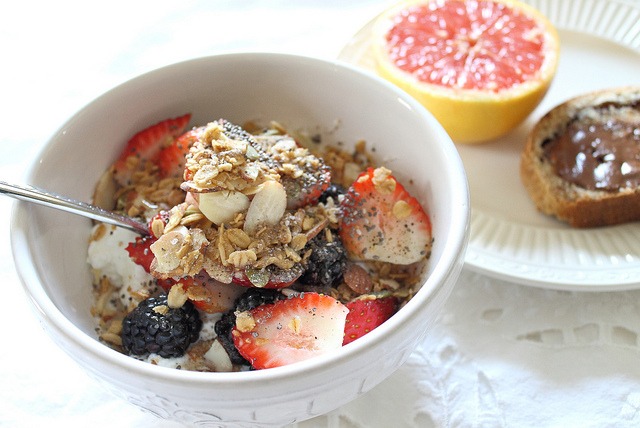 Finally a combination that kept me full for 4 hours! Yogurt + cottage cheese with a million toppings, half a grapefruit and a slice of bread with the last of the chocolate coconut almond butter. I wanted a breakfast bake really badly but after getting woken up at 2:46am to the third smoke detector in our house whose battery decides to die in the middle of the night and hearing my stomach growl then, I knew there was no way I was waiting 30 minutes for a breakfast bake to cook this morning. It actually took me almost an hour to go back to sleep after we changed the battery because I was so hungry.

Lunch was awesome and one of the times I’m very thankful to work from home so I can indulge my spur of the moment cravings.

This time it was for pesto.

It actually ended up being a vegan pesto because I was too lazy to unwrap the parmesan cheese I had in the fridge and threw in some nutritional yeast instead.

Loved it! The combination of walnuts, arugula and the nutritional yeast was awesome. I love pesto because it’s so forgiving, but this one really stood out flavor wise. 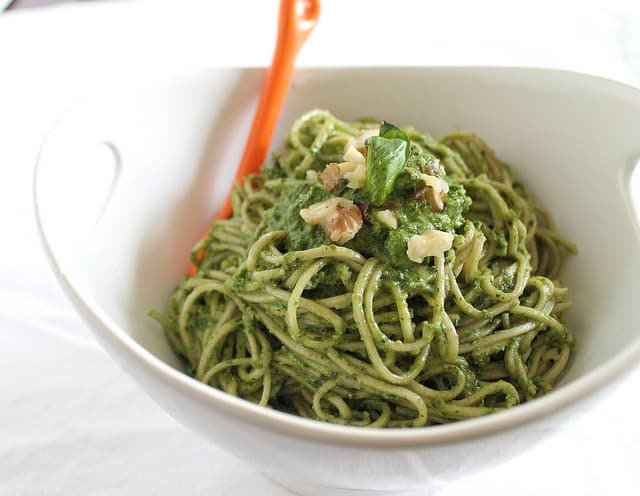 It went perfectly with some soba noodles I had in the pantry. From craving to lunch in just 15 minutes.

The ingredients were 2 cups arugula/baby spinach mix, 1/2 cup basil/parsley mix, 1/3 cup walnuts, zest and juice of 1/2 a lemon, 1 1/2 tablespoons nutritional yeast, extra virgin olive oil, salt & pepper. It made almost a cup so I have a bit leftover.

Dinner was totally made up on the go since Ulysses got home early just as I was finishing the bodyrock workout from hell. 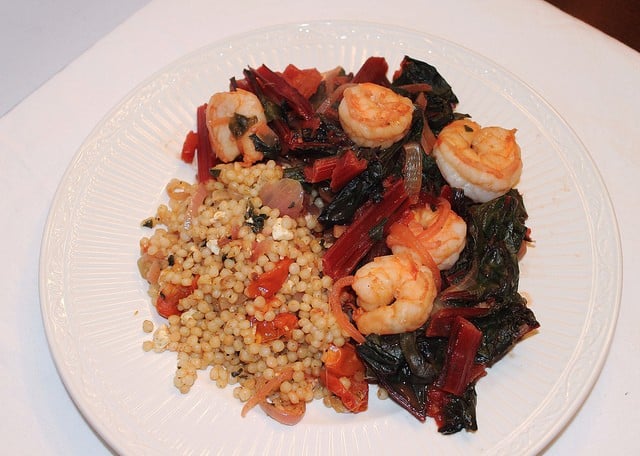 I had the most pathetic bunch of swiss chard in the fridge that was as limp and lifeless as…use your imagination, I’m not gonna go there. So I just sautéed it with some onions, garlic, a can of diced tomatoes and some red pepper flakes, threw in some frozen shrimp and ate it with an Israeli couscous salad I had on hand from the weekend.

I think I did pretty well with the month’s veggie theme this week. Hopefully that will make up for next week when I’m stuck eating conference food in a hotel all day long.

Great Eats! I still haven't tried swiss chard. I have no idea why cooking it intimidates me. It seems pretty straight forward. Oh well... maybe on day ;)

Oh I hate waking up hungry, If I go to bed on an empty stomach I don't sleep, at all. Love all of your eats! They all look delicious! And on another note I'm now really craving some choc nut butter but we have given up sweets and chocolate for lent! Wahhhhh :/ How many more days is it?? :(

Found you through WIAW and I am now a follower. Great photos! Looking forward to reading more of your posts. Oh, my husband has decided that our next dog will be a weimaraner.

what a fun coincidence! I love pesto but I've really been loving the arugula variety!

I have tried actually arugula walnu pesto and it is so good, I love it! Also, very nice pictures of the pesto!