This watermelon bacon salad is a refreshing, summery dish with a fun salty, crunchy kick. It’d make a great addition to your summer party.

Did you just do a double take on that title? Because I did and I’m the one who made the darn thing. 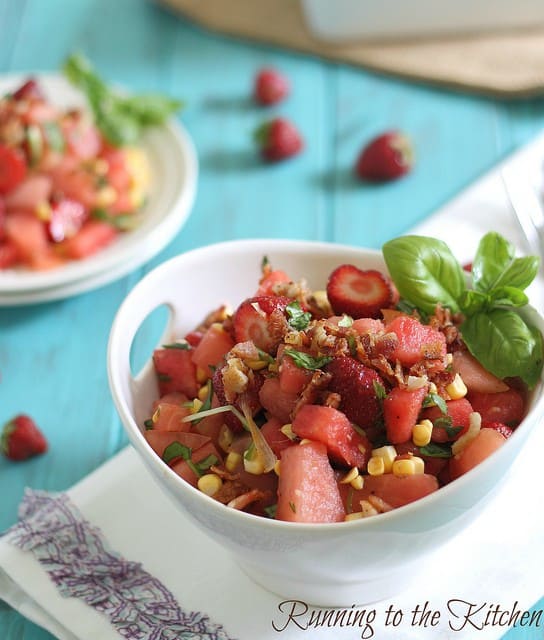 I feel like I owe some sort of apology for the influx of strawberries and basil recently but then I realize that’s what’s in season, that’s what I’m craving, and so hopefully you are too. If not, sorry, I’m not sorry. Come back in October maybe? 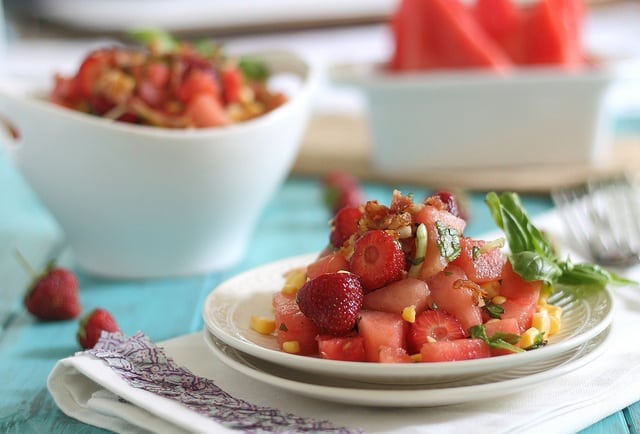 So there’s this half a watermelon in my fridge that’s really the size of a normal watermelon. I don’t even want to know what steroids were pumped through this thing because seriously, it’s ginormous. I love watermelon, but I never buy it. It’s heavy, it takes up an impractical amount of space in my dumbass side by side fridge which I loathe with all my being and cutting through the rind nearly gives me a heart attack as I fear the knife is going to slip and something important is going to be chopped off a la Game of Thrones. I’ve developed a new fear of shiny, metal, pointy things since watching that show, my chef’s knife included.

12 pounds is a lot of melon. I’ve come to this number by the way, solely by doing tricep extensions with it and figuring it’s right around my “easy set” weight for that exercise. That was a sight in the kitchen. Anyway, it’s a lot and something needed to be done.

I’ve done the watermelon, mint and feta thing before. It’s delicious, but I didn’t have feta. I did (and still do) have an overflowing produce drawer between my mother telling me to buy 15 things for father’s day and then not using any of them and the weekly CSA haul, however. So, a cob of corn, some peppery arugula and strawberries made their way into the bowl with a good dose of basil. I mixed it up with some simple oil and vinegar dressing, tasted it and determined it needed salt. 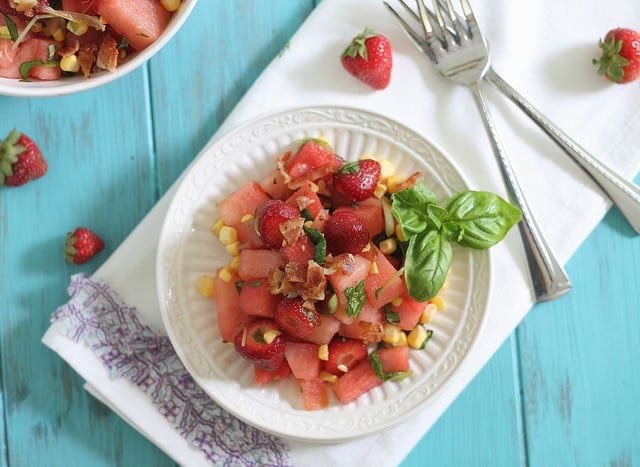 He’s such a good sport, stepping up to the plate (ha) like that, isn’t he?

What resulted was a totally refreshing and summery salad with a fun kick of salt and crunch. If you’re sick of stuff like that, you be crazy.

[…] it’s another summer fruit salad and yes, it has bacon again. But are you really that upset about those two […]

I made this for the fourth tomorrow. It's really good!!