We did it! I kind of cringe posting this picture because let’s just say it’s not my best look, but it is the look of a new PR! Woohoo! 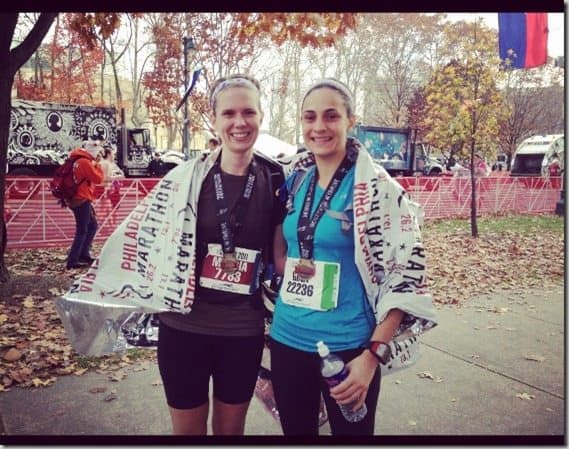 1. All you people that told me it’s a flat course are LIARS! This is not a flat course. Please see miles 7-10 below for reference. 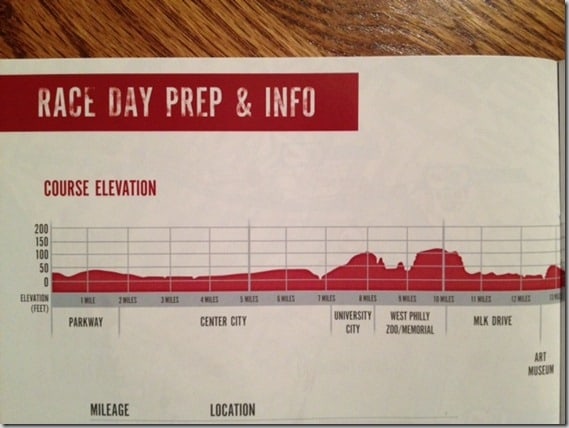 Does that look flat to you? Because to me it looks like DEATH. Go run in Florida to see what flat is like. I guarantee you’ll PR if this is your idea of flat.

2. I never thought I’d say this, but oh my God, running with someone was actually enjoyable for the first time ever! Thank you, Kari.

Don’t worry, I’ll keep it short. I know no one reads this part anyway.

Getting to the expo (and the race) was super easy and convenient. We stayed at the Embassy Suites which was right between the expo and the start line. Maybe 5 minutes to each. Perfect location (thank you hilton points).

Lowlight of the day: 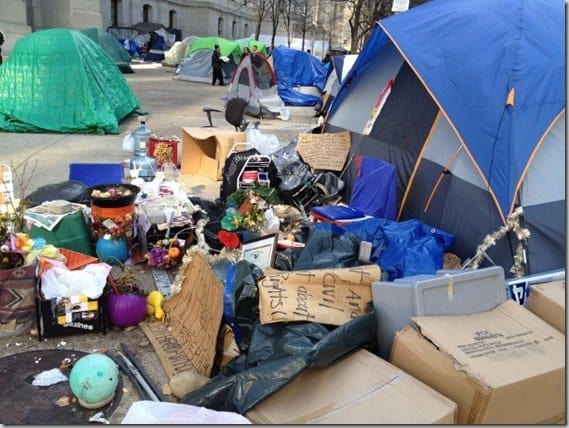 I’m pretty opinionated. If you know me in person, you know I will openly voice those opinions. Here, I’ll make it an abbreviated version. The fact that the city (and therefore the taxpayers) has to pay to have police and sanitary options for these people disgusts me and seems almost hypocritical to the message they are “trying” to send. I’m not against the message (in it’s entirety) but think this is an incredibly poor way to execute and communicate it. <end rant>

Highlight of the day: 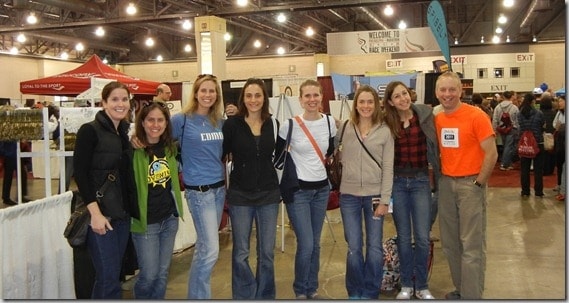 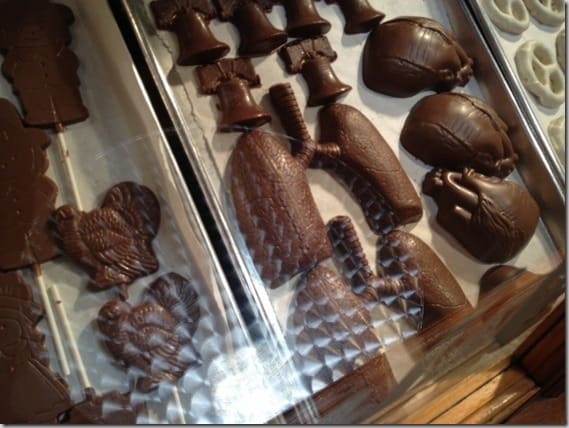 2. Reading terminal goodies. Yes, those are literally chocolate lungs & hearts. I opted for something a little more traditional and went with the peanut butter chocolate chip cookie. 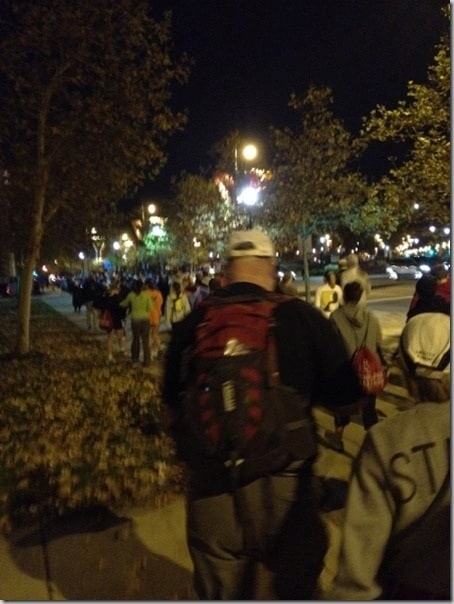 Walking to the race took about 5 minutes. We just walked out of the hotel lobby and were greeted with literally hundreds/thousands of people walking right past us towards the art museum’s steps. It was 51 degrees out at the time so I just brought throw away gloves and dealt with cold arms until we started. It really was a great temperature outside. 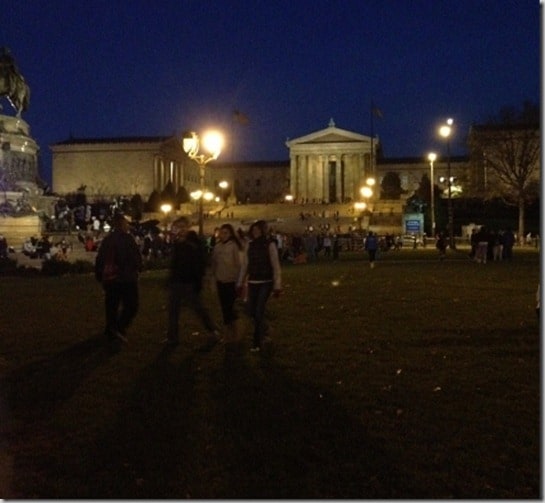 You know the drill…wait in line for port-a-potty, do your thing, get in corral and wait. That’s exactly what we did. Kari was in the gray corral which was directly behind the green one I was in so we decided to line up at the very front of the gray one to play by the rules. The 3:50 pace group was right on the other side of the corral divider so we thought we were good to go.

Our view of center city as we waited. 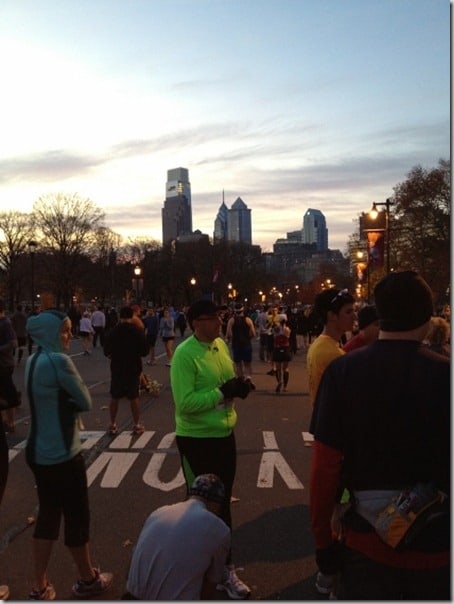 Getting closer to the start time! 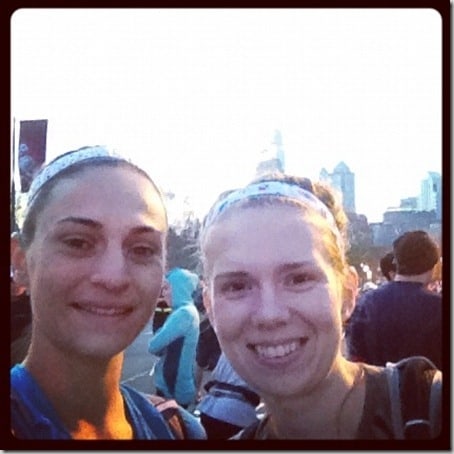 Come 7am, the National Anthem played and we inched forward as they started each corral. We literally got about 50 feet from the start and the people holding the corral divider started to move off to the right to let us go, we all started jogging to cross the start and then race volunteers literally jumped in front with their arms out saying “STOP!” I came to an abrupt stop and the girl behind me ran into me and rolled her ankle! Thankfully, she recuperated before the start but, what the heck!? Pretty poor planning right there. They ended up holding us for about a minute until the other corral ahead of us (with the 3:50 pace group) was far enough out to stagger us. There went our plans of running 8:47’s with that pace group (which was our goal since that would’ve given me a 1:55 half)…

So, off we went. From here on out there are no pictures so I’ll try to quickly recap some of the miles.

Awesome crowds. We looked at our watches a lot to try and get into the right pace. Not surprisingly, we were going a bit too fast at times. We both had Garmins on and it’s funny how different the paces were between the two. Mine seemed to be consistently slower than Kari’s.

I don’t remember much except running towards the water and then through a few residential streets where one woman in her PJ’s came to the front door and yelled “it’s a beautiful day for a run!” Like it was some casual run we were all out for. I laughed. It also felt very crowded around these miles. We tried to conserve our energy and not weave. Our times are evident of being held up a little by the crowds.

Hit the 10K right around 55:00 (we were trying to subtract 10:15 from every mile marker…not as easy as it sounds when all your energy is going into moving your legs) and was feeling pretty good. We were on Chestnut street for a lot of these miles and it was packed. The energy was awesome from the crowds. We also ended up making up some good time in these 2 miles but once we saw 8:30, we knew we needed to slow down a bit. Mile 7 was also where the first hill started. It wasn’t too bad. It was the first one and it was a low grade incline. I could handle it. In fact, it ended up being our 2nd fastest mile.

Kill me now. Honestly, these miles sucked. Kristy had told us the day before about the hill by the zoo (mile 9) so I knew it was coming but when we got to it, it was way steeper and longer than I thought it would be. Kari dominates hills. I don’t. I’m a wuss and don’t train on them regularly. I’m pretty sure I said “Oh my God” about 10 times. In retrospect, it probably sounded like a dirty porno with me huffing “Oh my God” in excess. I wanted to walk so badly and I guarantee I would’ve if Kari wasn’t there, one of the great parts about running with someone. We slowed down to a painful pace but it was the only way I was making it up that thing. The worst part was that it flattened out for about a mile before going downhill so it barely felt like relief when we got to the top. Around mile 10 is when Kari started to not feel so hot and said she was going to finish at the half with me instead of running the full. Honestly, we both felt pretty beat and were hurting at this point. I just tried to keep trucking and refused to look at my Garmin at all. I was actually shocked that the hill had only slowed us down to a 9:11 pace. Not nearly as bad as I had thought.

Kari was not feeling good around 11 and at 11.8ish she said she had to stop because she thought she was going to throw up. She waived me on and I knew if I wanted a PR I needed to go. So I did. I picked up the pace a bit and felt about as good as you can feel for being almost 12 miles in. I was kind of surprised by the lack of crowds at the end. That’s when I really needed the extra motivation and I thought it was sparse at best. Once I hit 12, I tried to really pick it up. I was doing mental math the whole time and was nervous I wasn’t going to beat my PR. In retrospect, it was probably half a mile too soon to pick it up like I did because I lost some kick around 12.75-13 but, oh well. Once we split from the marathoners and we were by the Rocky steps, I sprinted. When I saw the clock say 2:06, I ran like hell knowing I was 10 minutes and 15 seconds behind that and 1:56xx would be a PR. I crossed the finish line at 1:56:30, high fiving the mayor. 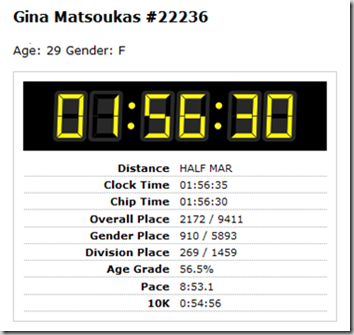 I accomplished my goal which was solely to PR. Secretly, I was hoping for something a little faster but given this course in comparison to the Palm Beach half which was completely flat, I’m super happy with my time.  I’m also super curious what I could run Palm Beach in now and it does just happen to be in 2 weeks. I’m not going lie and say I haven’t already looked up flight costs and entry fees because I have and I’m seriously considering it. My mother in law lives there so it would be easy. I know I’m better trained right now than I was last year and I’m just curious what I can do on a completely flat course. I don’t want to have to wait until next year and go through a whole new round of training to find out. Decisions…decisions….

All in all, Philly was great. It’s not even possible to compare the 6,000 runner course of Palm Beach to the 27,000 runner course of yesterday. It was an entirely different experience. I feel great too. After last year’s half, I honestly couldn’t move for about 4 days, my legs were already cramped up by about 2pm that day and my stomach couldn’t hold anything down for about 10 hours. Yesterday, we stretched out, showered, drove almost 4 hours back in our compression shorts and I was playing with Ginger in the backyard when I got home. I’d call that progress.

Also, I love that only on a race day is it was acceptable to eat this delicious apple pie for dinner thanks to my lovely husband for making it for me. There was even lattice under that layer of butter and sugar that he poured on top per the directions, but really should’ve just tossed the apples with first. 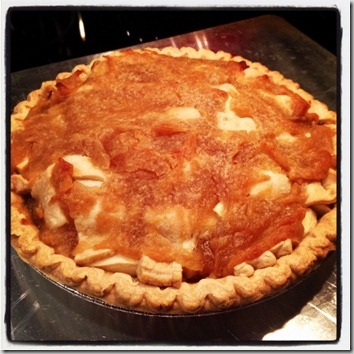 If you’re curious how Kari did, go check our her post.

*My heart goes out to the families of the 2 runners that passed away at the end of the race yesterday. What a horrible tragedy.

[…] it was time to share with you all what I’ve been loving for workouts recently now that both half marathons are over. I have actually still been working out and not just eating all this […]

I just found your post after searching for Philly Half Marathon recaps! I signed up the other week for this year's and I'm super nervous/excited! This will be my longest I've ever run. Those miles 7-10 are freaking me out--is it really awful? I kept hearing it was a flat course too! BS! Wondering if I should incorporate hills into my training plan. Happy I found your blog--I live in Brooklyn so I'm not too far from you!

You'll love it! It's a great course, really. It's definitely NOT flat like people tell you but it's not horrendous either. Granted, you may feel differently when you get to mile 7 during the race ;). The crowds on the course are awesome though and you get a ton of energy from them. I would definitely suggest incorporating hills though. I didn't really so that was like a double whammy when they appeared out of nowhere.

[...] getting documented on here as much lately. My running has waned (like A LOT) since my previous two half marathons so I don’t have much to talk about in terms of training for anything. However, I’ve [...]

[...] that looks like this from the outside, to find this waiting for you on the inside…rivals setting a PR after 13.1 miles.Holding your breath waiting for yeast to activate versus 12 weeks of training and 190 [...]

This was the first post that led me to read your blog more often, me, my mom, and sister-in-law ran the Philly Half this year too! And we PR'ed as well, 1:55!! woo to under 2 hours! Reading Terminal is awesome, isn't it?!

Awesome, congrats on your PR! I was secretly shooting for 1:55 and tried to stay with that pace group, but we were on the other side of the corral and they held us back at the start so we lost them. Reading terminal was amazing. I could've spent a whole day in there eating my way through :)