These peanut butter protein cookies are packed with protein and only 5 ingredients. 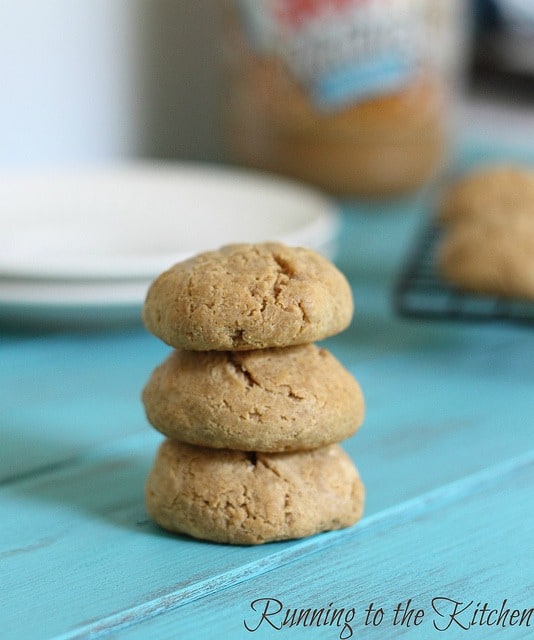 So the story with these cookies is kind of funny.

It’s around the normal “sweets witching hour” of the afternoon earlier this week, I decide I need something stat otherwise I can’t go on with another minute of my day. I head to the kitchen and decide to experiment by throwing pretty much nothing more than protein powder, an egg and peanut butter into a bowl, mixing it vigorously and rolling into balls to bake. Please note, it took every ounce of restraint I had to not leave them in ball form since it’s been approximately 3-4 weeks since the last “ball” recipe on here. Nope, I resisted and lightly pressed them down with a fork instead to make them more like cookies. Mostly because I don’t think I could come up with another peanut butter ball name considering the amount already on here. Throw cookie on the end and it’s a completely different beast. Obviously. 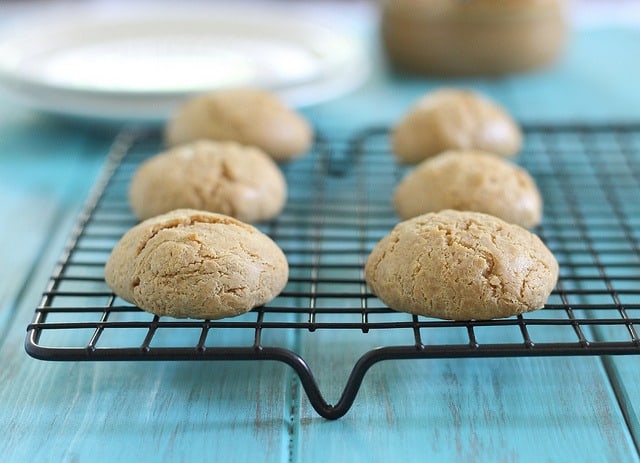 So they’re baking. I’m watching intently having no idea if this super simple combination is too good to be true when 8 minutes passes and I deem them done.

They kind of slid all over the silpat like air hockey pucks do from the oil in the peanut butter oozing out as they baked which I found slightly amusing. Mostly because it brought back memories of when Ulysses and I were dating in high school and going to the arcade was the cool thing to do. He was that person that would win and beat every game. Even the one with the claw thing that you grab the stuffed animal that’s been shoved down in the pile as tightly as possible. Yep, that one that no one wins. He did. But I kicked his ass in air hockey every time. I like that game. And therefore, I was already smitten with these little cookies.

I think I let them cool for about a minute before inhaling one, realizing the combination more than worked and doing a little happy dance in the kitchen. It didn’t last long though when I remembered I only made 6 since I was too scared to waste precious protein powder and peanut butter on an untested concoction.

So I let them cool, have another to make sure I wasn’t imagining things before and then make my final decision. They’re going on the blog.

I’m all excited. A new cookie recipe, 5 ingredients and packed with protein. Really, does it get better than that?

So I sit down to write this post and for some strange reason decide to google “peanut butter protein cookies” first. 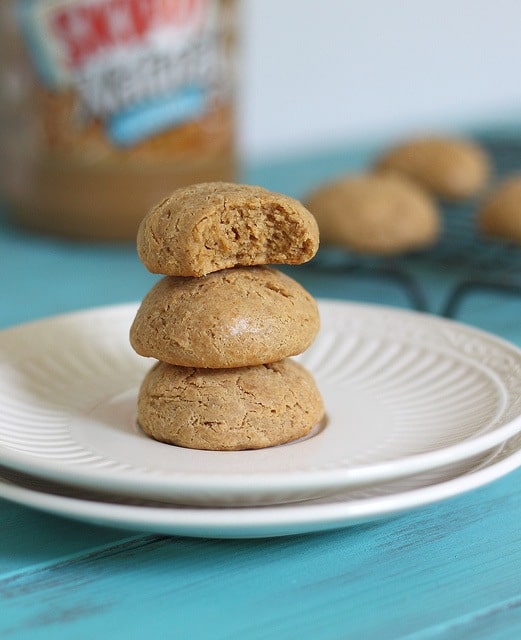 Am I pissed that I’m not as creative as I thought? No. But I am incredibly annoyed that I didn’t just turn to google in the first place because then I would’ve had more than 6 cookies on my counter.

[…] may have noticed my recent background board considering it’s been in the last three posts. I’m only slightly obsessed with it. Last week, I alluded to manipulating my husband with mac […]

I've just stumbled on your blog and would LOVE to try these. I give full kudos for not reposting, but alas, at this time the other website is broken? Would you share your portions? :)

Breanne, I'm so glad I'm not the only one! I literally just found this recipe yesterday and I LOVE peanut butter. And I LOVE cookies. And I'm working out pretty hard these days (not CrossFit...not yet, anyway - I'm intimidated and I don't live in a place with a facility/schedule that suits my needs - excuses, excuses, right?) so I can only justify a snack if it's got tons of protein in it. I was going to whine about the link to the other site not working because, Google as I might, I couldn't come up with a recipe that looked like the one Gina RTTK posted, nor with similar ingredients mentioned. Thanks, Gina, for providing a rough guideline.

Gina, I do have a question - 1 "scoop" of vanilla whey protein is mentioned in many of your protein recipes. How much is a scoop? How much protein powder are we talking about in grams and how many grams of protein is in that scoop? Are you able to share the brand/brands and serving size you commonly use? Thanks!

Someone else mentioned the same thing and I feel horrible but I didn't end up keeping the recipe/proportions and I honestly cannot remember for the life of me since this was so long ago. I'm betting you can't really make these horrible by experimenting though. Try 1 egg, 1 teaspoon vanilla, a scoop of protein powder and maybe 1/2 cup of pb with some sweetener of choice. Hope it works!

kudos to you for not reprinting... i think so many bloggers don't realize that one of the best things they can do to support the blogging community on the whole is not re-post someone else's recipe on their blog. the link does everything - provides the reader what they want & gives the original poster the traffic the deserve.

Love the simplicity of the recipe and the peanut butter!! Oh, and the extra protein is definitely an added bonus!

Oh Yummy. How do I stop after the two I just inhaled? Thank you AGAIN. Gina, I am making something or other that you have posted almost daily!!!