This apple cinnamon tea latte is the perfect warm and cozy fall drink. Make it with just a few simple ingredients and feel like a barista!

There are two kinds of nights for me lately.

One involves a nice big red wine glass and polishing off as much of the 6 bottles stashed in one of my bottom kitchen cabinets as possible without waking up with a hangover.

It’s a fine line but no sense in packing and moving wine bottles, right?

The other entails my favorite teal mug filled with this apple cinnamon tea latte.

It’s my at home version of an overpriced Starbucks fall drink (which for the record, I haven’t had even one this year) and it usually comes with a side of Scandal on Netflix, sweats and a big fleece blanket. 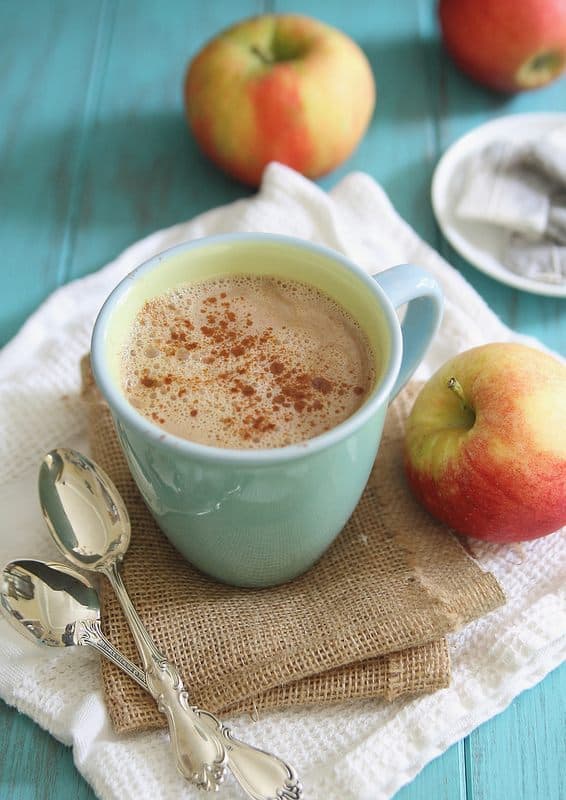 So Saturday night in an attempt to enjoy my weekend while Ulysses was working, I balled up old junk mail in the fireplace, placed a few logs on top and lit the paper to get a fire going while I started simmering the milk and cinnamon for this apple tea latte with a new episode of Scandal waiting for me on tv.

I noticed a slight smoke smell while I was behind the stove (just out of sight of the fireplace) and thought “hmm, that’s weird” but continued on.

Then just as the tea pot started to whistle, the smoke detector starts going off.

Ginger starts howling and I almost burn my hand from the steam coming out of the tea pot trying to turn the burner off.

I look into the family room and it’s filled with smoke, tons of it just pouring out of the fireplace and slowly spreading throughout the house.

At this point, the fire is blazing and I still don’t understand what the heck is going on because this has never happened before.

And then it hits me. The gung-ho radon inspector who was here a couple of weeks ago shut the flue when he set the system up (as if that would really make a difference in a radon reading) and we hadn’t used the fireplace since.

So now I’m staring at the fireplace trying to figure out how to get my hand in there with a fire blazing below it to open the flue.

I try using the lighter, then an extra piece of wood unsuccessfully before realizing it’s just not going to work and I need to put the fire out.

So I fill up a bowl with water and then dump it in the fireplace.

Water gets everywhere on hearth, the fire sizzles, I reach up to open the flue without thinking that duh, the metal latch is going to be hot after a fire was burning below it and burn my hand as I pull it open.

At this point, Ginger is hiding under the table, I’m now running around the house waving pillows in the air below the smoke detectors to get them to shut up and opening all the windows to get some fresh air in the house when I realize I left the milk simmering on the stove for the apple cinnamon tea latte.

I run back into the kitchen to find a burned milk mess in a sauce pot. 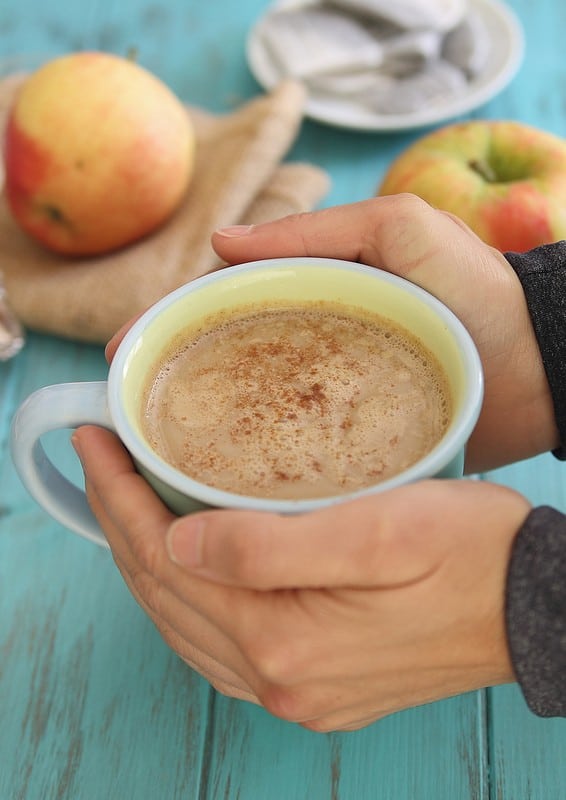 And that’s when Saturday night went from a tea latte night to a wine night.

Only, I wasn’t successful in waking up on Sunday without a hangover.

lol...just wondering...is this how the blog got its name?

"I run back into the kitchen to find a burned milk mess in a sauce pot."

This is a super cozy and comforting drink! It was perfect to sip on while I enjoyed my book today!

[…] Apple Cinnamon Tea Latte from Running To The Kitchen […]

[…] Apple Cinnamon Tea Latte (courtesy of Running to the Kitchen) […]

17 Delicious Alternatives To Your Morning Coffee