This tempeh sandwich is one of my favorite vegetarian lunches. It’s piled high on whole wheat bread with cheddar, apples and jelly. 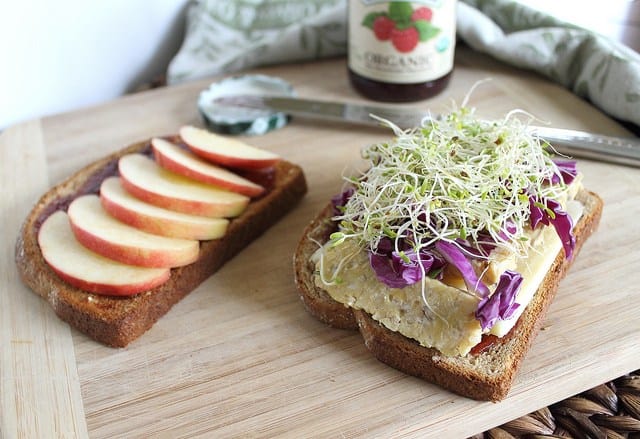 I applied to 12 colleges in high school.

They were all pretty much the same kind of school (relatively small liberal arts type places that cost a small fortune and could’ve single handedly kept J Crew in business with the amount of polo shirts worn by the guys alone). I got accepted into 11 of the 12 (I’m still bitter about that 1, thanks Georgetown) and had quite the decision to face when picking since it was pretty much like choosing which M&M is your favorite, they’re all different colors of the same damn thing.

Two things made up my mind: lots of wine over Easter dinner in 2000 and the fact that Dickinson’s food was ranked 7th in the nation at the time.

My parent’s would like to think it had something to do with the half merit scholarship and that I made a sound financial decision at the age of 18 but I really don’t deserve that kind of credit, it was the food.

Dickinson’s caf was the first time I had ever even heard the term vegan let alone know what the heck tempeh was.

If I had no idea how to pronounce it, it seemed best to avoid it altogether.

True fact, I still look at the word and pronounce it “tem-pee” in my head even though I now know that’s wrong.

It’s one of those words that I pause and take a second to think about before saying out loud to make sure I get right.

I never actually ate tempeh in college, it ended up taking about 6 years after graduation and a major healthy eating overhaul to get the courage to buy the nasty looking smooshed together pale substance for the first time.

Buying it was the easy part, knowing what the heck to do with it was a whole other issue.

I’ve experimented in many ways, some edible, some not even worthy of giving to the dog and it comes down to two meals that are my favorite.

One being my tempeh marinade which results in the crispiest, most flavorful baked tempeh you can imagine.

This tempeh sandwich being the other.

One weird as heck sandwich that somehow just works.

Raw tempeh, cheddar, jelly, apple slices and in this case sprouts and cabbage although, any greenery will do on toasted whole wheat.

Don’t knock it till you try it. And I highly recommend you do.

I was in search of a tempeh recipe and found your blog through foodgawker. This sandwich looks awesome and I will have to give it a try.

ps. I am currently a senior at Dickinson! We now (as of a few years ago) have a special counter in the caf called the KOVE which stands for Kosher Vegan dining and the produce some tasty meals.

[...] Gina’s post earlier this week, I was craving a good tempeh sandwich.  I almost always have a package in my fridge since it has a [...]

As a proud Hoya, I couldn't help but smile when I saw mention of Georgetown. Even if you didn't get in, 11/12 schools is very impressive and it sounds like Dickinson's dining hall is much more impressive than Georgetown.

This looks amazing. I usually only do savory with my tempeh but the sweet apple idea has me drooling!

I loved hearing this story! I'm currently in the college process (I've applied to 19 schools, and the final decisions come out next week!) and will soon be making the hard decision of where to attend. It's nice to know that someone else ranks food as one of the number one reasons for choosing a school. My requirements for a school: must have a Whole Foods, Trader Joes, and yoga studio. Anyway, your sandwich looks great! I'm slowly warming up to tempeh :)