A day of eats including strawberry chia powercake bars which are high in protein and a delicious after workout snack.

For the past few Wednesday’s I’ve been throwing Pioneer Woman in your face but since our next recipe in that series (and it’s a good one!) isn’t until next Wednesday, how about a WIAW post? Sound good?

I spent way too much time last night playing around with iphone collage apps, iPiccy and picmonkey. Totally loving iPiccy but really annoyed by their collage layout choices for 3 pictures. They’re lame to say the least. Here’s the result of that 2 hours or so of my life.

1. Vans waffles, one with pb the other with 1 egg and 2 egg whites. Side of cottage cheese/yogurt with strawberries & blueberries on top.

2. Leftover salmon from Monday’s dinner with an immense about of roasted broccoli and a kiwi.

For the mini meals/snacks of the day we have: 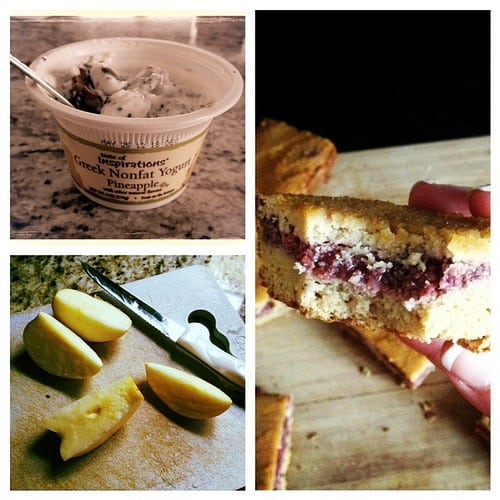 1. Store brand greek yogurt (first time testing it out, totally won me over on taste & price tag) with chia, pepitas, sliced almonds and a tinnnny amount of cookie butter.

3. A strawberry chia coconut powercake that I made into bars instead of muffins with an unpictured glass of milk. This and the apple were my post workout snack.

So let’s talk about these powercakes…. 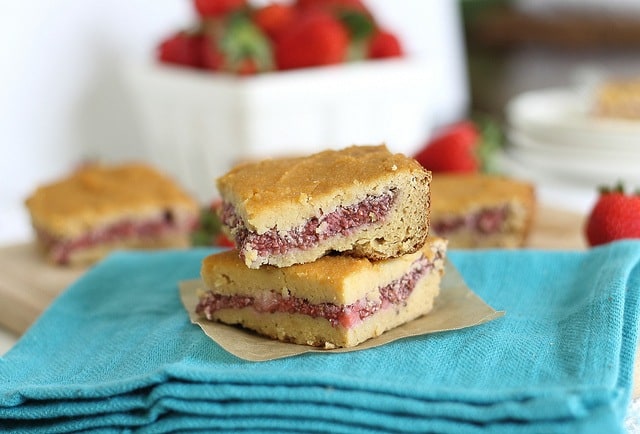 When I saw Kasey’s post on these yesterday, I had just run out of cinnamon protein bars and was already thinking of making more for post workout snacks this week. The strawberry filling is what did me in. I couldn’t resist giving them a shot.

The bar idea was really just my laziness in not wanting to clean the muffin pan (hate that!). I followed her recipe exactly except used 2T maple syrup as sweetener and obviously had to bake them a bit longer since they weren’t in muffin form.

If you like coconut flour, you will love these. You’ll be motivated to workout just knowing they’re waiting for you afterwards. Seriously, it’s all I thought about while on the treadmill yesterday. Well that and how awesome it felt to be moving again with some cardio (Livefit phase 1 recap is coming soon, I promise). It doesn’t really feel like a workout when you’re not sweating and I found it hard to break a sweat from just lifting the past 4 weeks. My unfinished, unheated basement where the gym equipment is might have something to do with that.

Go check out Jenn’s blog for all the WIAW link ups if you want to stalk some other people’s food.
Click here to cancel reply.

[...] I took my original Chia Jam Filled PowerMuffins & turned them into bars, thanks to Gina for the [...]

I need these in my life! I've never cooked/baked with coconut flour, but I'm excited to try it.

These look delicious and sound like, as you say, a great post-workout snack. I don't keep protein powder in the house and hate to buy it for this one recipe. Do you think I could omit it, or what would I substitute for it - more flour?

I wouldn't omit it without a substitution as it constitutes a good bit of the "dry" ingredients. Since it's not my recipe, I haven't really played around with it but I'm sure you could try another flour in it's place. Maybe oat flour or spelt? I'm honestly not too sure, sorry! If you head over to Kaley's blog (it's her recipe) she might know better than me.

Two things. 1) I just got around to making your cinnamon bars, which are SO amazing. I subbed the buckwheat for almond flour and then for the topping, I just mixed together kerrygold butter and honey, and they turned out fantastic. 2) I will make these next! ok, three things. 3) You got Pinterest!

My stomach is growling OUT LOUD at the thought of these! Omg I need you to move into my kitchen for a bit and teach me how to bake. Kthx! <3