Yesterday marked the beginning of our summer company meeting which basically meant spending almost 12 hours shivering in an over air-conditioned conference space. We’ve been using the same hotel for the past 2 years for this meeting and I really should’ve learned my lesson by now and dressed appropriately but there’s something about wearing pants and long sleeves in July that just isn’t right. Luckily, today’s activities have us outside in the warmth with casual dress encouraged. 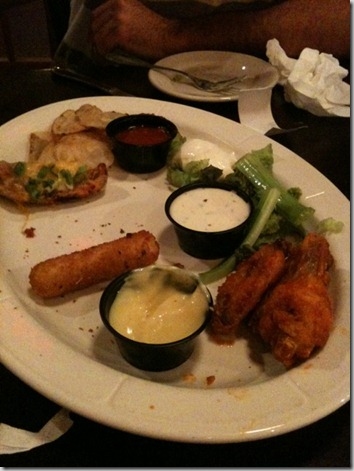 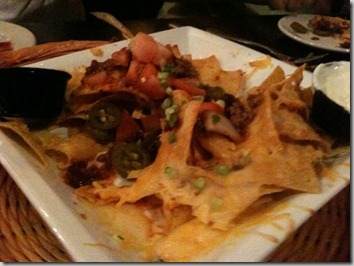 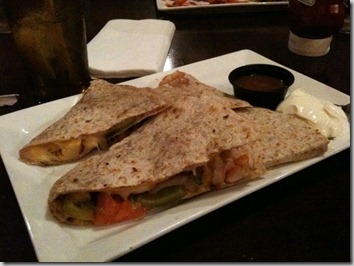 This was just dinner. Lunch was provided by the hotel staff and consisted of wraps, pasta salad and some crisp like thing for dessert I didn’t try. Snacks were boxed Keebler Elf cookies and a choice of soda or Diet Arizona Green Tea. If you follow me on twitter you might’ve seen this:

Please ignore the fact that I misspelled “coke.” Auto-correct hates me.

Not that I was surprised but, can you believe they market something with “Green Tea” and all the anti-oxidant benefits of it and yet, the ingredient list has high fructose corn syrup among many other unpronounceable items in it!  I went with the diet coke. It was probably the first full can of soda I’ve had in 2 years but at 4pm water just wasn’t cutting it anymore.

Needless to say, for the day, I didn’t eat much and I was ravenous by 5pm. Since our meeting went until 6pm and dinner was at 6:30 though, there was no time for a workout in between leaving after dinner as my only option. That meant trying to not stuff my face at dinner even though I was starving so I could actually run afterwards. The quesadilla was my attempt at something relatively light (compared to the preponderance of burgers on the menu) yet still more filling than a salad. Not the best choice as my stomach let me know later on the treadmill but there weren’t many good options to work with.

When I finally did get to the hotel gym at 9pm I spent a good 15 minutes stretching as my back is still not 100% and I had been sitting all day before hopping on the treadmill for a great “progressive” tempo run that looked something like this.

It was basically 1 mile warm up, 2 miles tempo, 1 mile cool down and some walking on the front and back end. Not a true tempo workout but, close and it felt good to run that long after a week long hiatus.

I was actually supposed to begin NROLFW stage 2 yesterday after the scheduled 1 week break between stages but, with the company meeting through Wednesday, a hotel gym that’s not fully equipped for lifting and my back not being 100% yet, I’m going to wait until I’m home on Thursday to start. I figure it will give me the extra time to heal some more (it’s one thing to do cardio but I feel like lifting heavy weights right now is still dangerous in risking re-injury) and in the long run an extra 4 days off won’t mean anything. I also have a chiropractor appointment on Thursday so I can run this by her before starting to see what her opinion is. I’d rather be able to run and hold off on lifting until I fully heal than re-injure myself and not be able to do anything again. Couches and ice packs get old fast!

Time for our outdoor activity day which, word on the street includes building rafts, bathing suits and rock climbing. Today should be way more fun (and warm!) than yesterday!

What’s your favorite version of a tempo run on the treadmill?

Does your job do fun company meeting activities?

Tell me I’m not crazy and you’ve heard/believe that when you’re cold your hair grows back faster (like on women’s legs)!? I was having this discussion with some co-workers today that said they’d never heard that before! I thought this was common knowledge??

[...] in half which was pretty unfortunate but, overall it was still an incredibly fun day. Beats an over air-conditioned conference room any [...]

I do believe being cold makes hair grow faster!

Our company does some really awesome outings/meetings. For example, we're hiking a fourteener in September!

Good luck and stay away from that fake "Green Tea!"

The cold/hair comment is so true; trust me on this one.

Urghh I hate it when there are no decent food options! Well done for staying motivated to get your run in! And 4.6 miles is a really long run especially after just being injured so great job! :) As for the the hair thing, I always notice it grows back way faster when I'm in the heat?! It would make more sense in the cold though...

Oh how that food looks unappetizing (sorry...). I hate that situation of sitting at a meeting and dinner with horrible food and not being able to slip away to get something proper. I'm impressed that you actually got in your workout! Good for you...

I never do treadmill runs I only run outside. Can't seem to get motivated on a treadmill.